I love the earthy taste of lentils in soups, salads, pilafs & when used as a main dish.  When I was a strict vegetarian many years ago, I developed a taste for these nutritional legumes and came to rely on them quite often.  Packed with a lot of fiber and protein, among other beneficial good things, lentils make a most comforting & delicious soup during the colder months.  If I'm making this particular soup I will get the largest stockpot I own and cook a big batch. 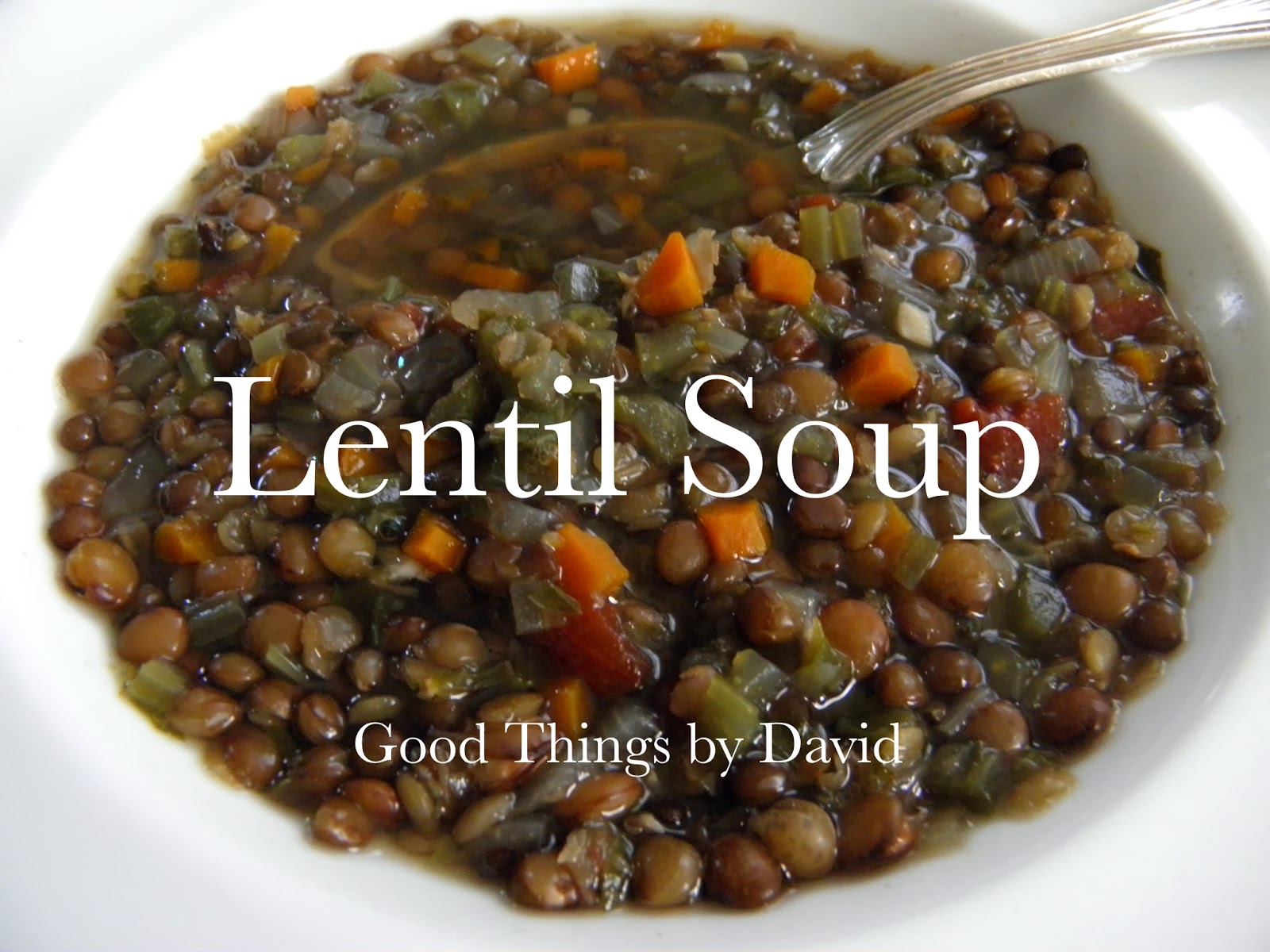 Lentil soup is among my favorite things to eat for meatless dinners and it always manages to get devoured by everyone.  This particular soup gets its flavor and texture from four different varieties of lentils, but you can get away with using just two types and still make it delicious.  I've given you several optional ingredients to add to the soup, so pick & choose according to your preferences.  The best thing about this soup, other than the taste, is that it can be made with a minimum of fuss in the kitchen.  You can always serve it with some plain rice or orzo to make it even more substantial, but a crusty bread from a local bakery (or your own) and a nice crisp salad is all you need for a delicious meal. 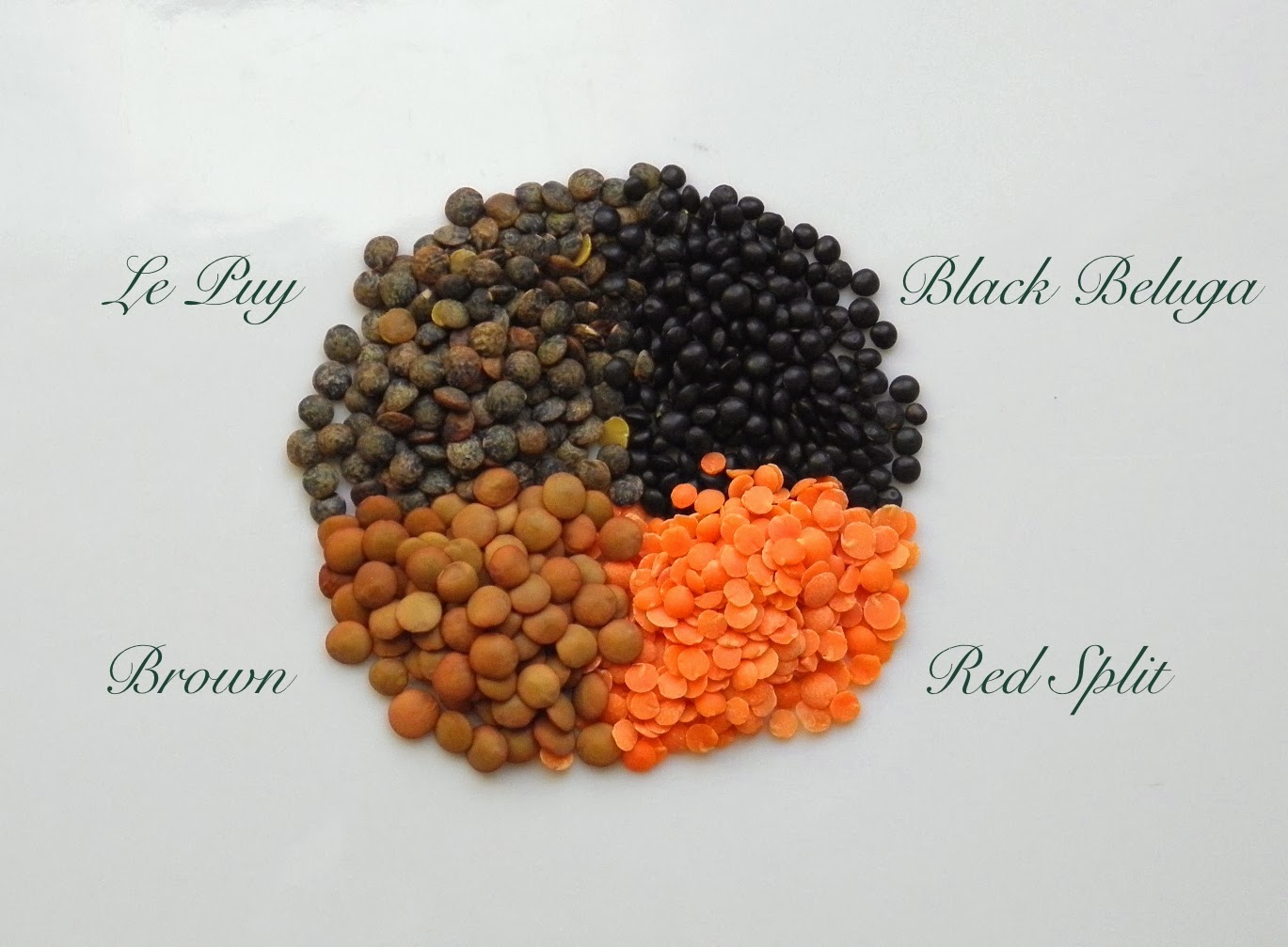 The lentils, clockwise from top left.  Le Puy French Lentils are small & green in color; they hold their shape when cooked through (great for salads).  Black Beluga Lentils are the smallest & perhaps the earthiest of these four; they hold their shape very well when cooked.  Red Split Lentils range in color from salmon/pink to a deep orange and are great for curries; they are the quickest to cook & turn into puree when fully done.  Brown Lentils are the most common; they take the longest to cook, but are very meaty & quite tasty in soups. 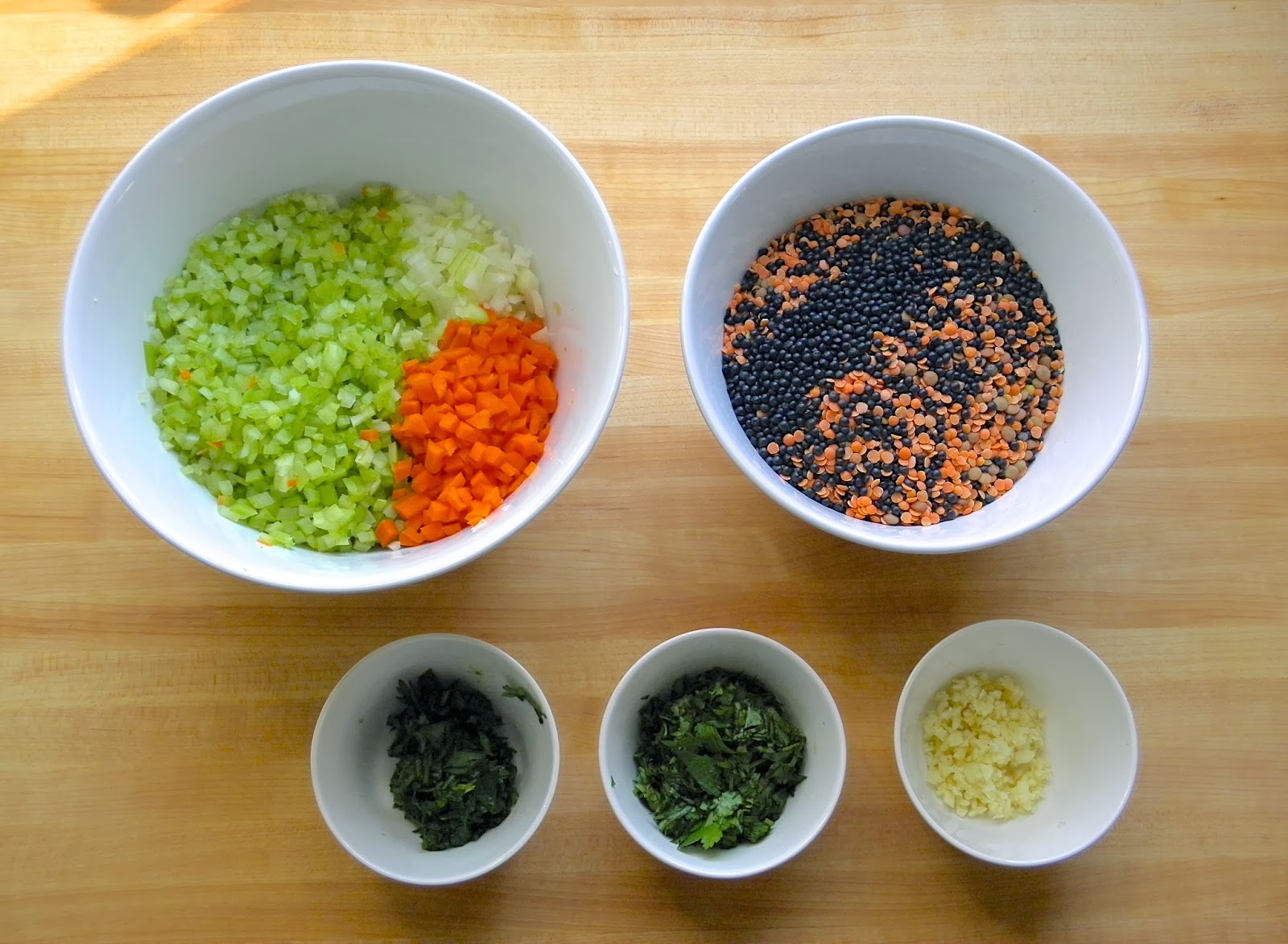 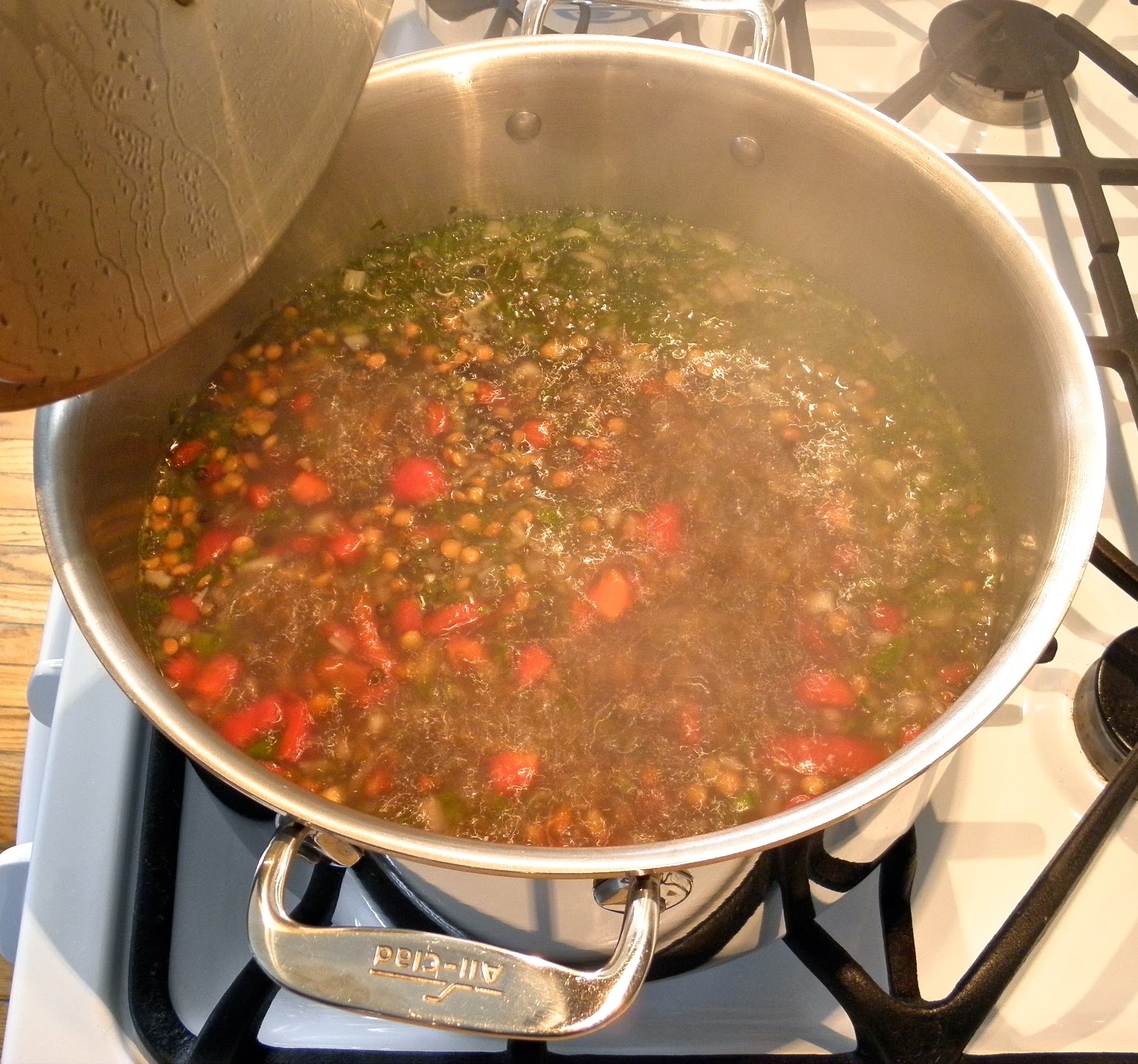 In a large stock pot (at least 6 quarts), add the chicken stock and all of the ingredients at the same time.  If you're including potatoes it's fine to add them at the beginning.  Bring the soup to just under the boiling point over high heat & lower to a simmer; add several pinches of salt & pepper.  Cover the pot well & simmer until all of the lentils are cooked through.  Each legume cooks differently, so check after 45 minutes for tender lentils. 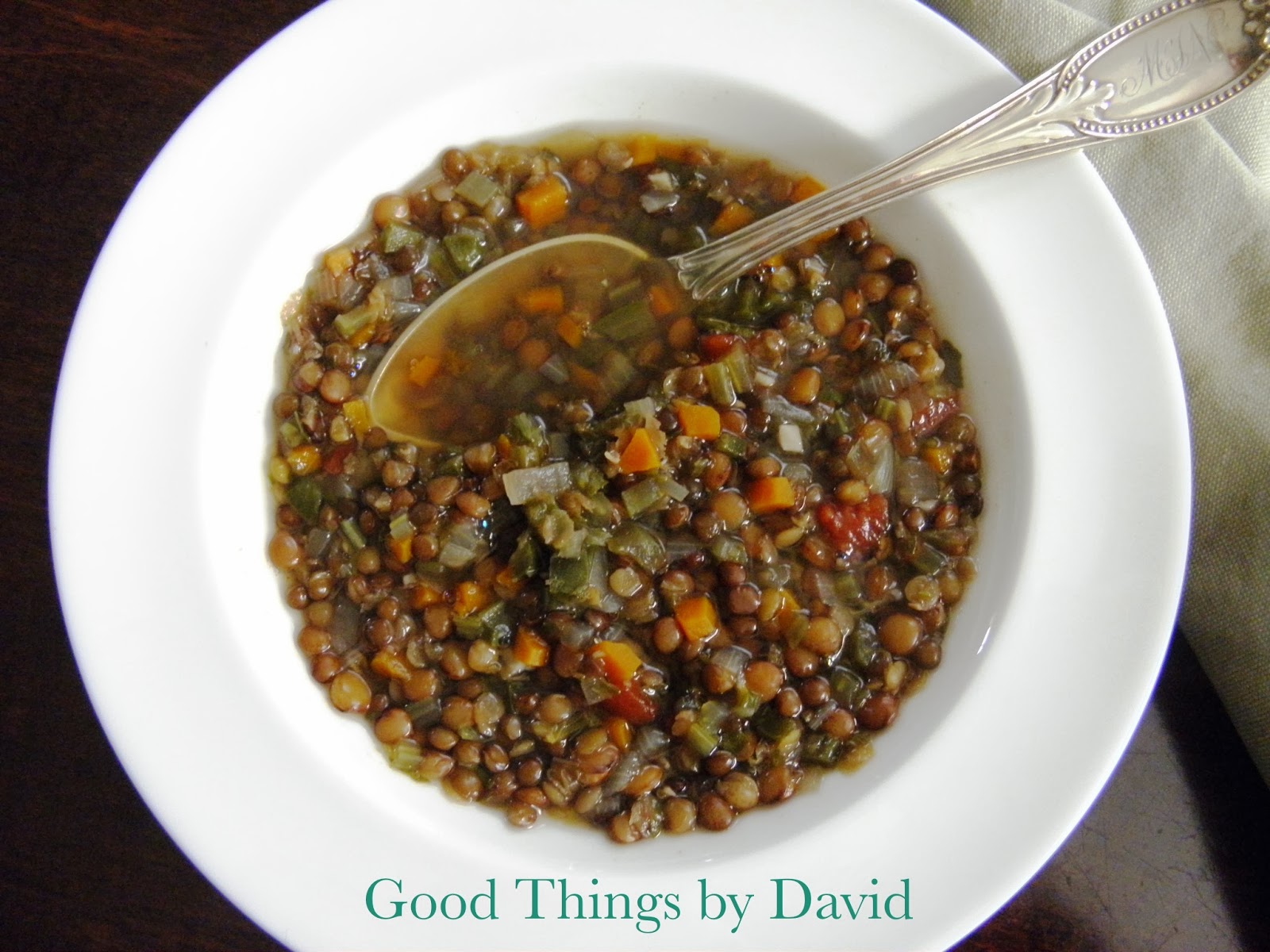 The finished soup is perfectly done; test for seasoning and add salt & pepper if needed.  The black, brown & Le Puy lentils have held their shape, while the split red lentils have pureed to give the soup a thick richness.  If you've added jalapeño peppers, the soup will have a bit of kick.

Make this recipe and enjoy a bowl of my hearty Lentil Soup.  It's great to serve to vegetarians (using vegetable stock) and non vegetarians alike during winter, but it's also good to have whenever you feel like some wholesome goodness.  The soup freezes extremely well in individual portions and reheats wonderfully for work lunches or weeknight dinners.  As I said, add some rice to each serving for a heartier soup or serve with a good baguette.