While we were at the shore several weeks ago I decided to collect a few shells during one of my walks.  The long stretch of beach that I love so much is covered with seashells, stones and small pebbles locally known as Cape May diamonds.  Not really knowing what I would do with them or where I would display them, I filled a small bag with a few items as we made our way back to the car.  There was such a large variety that I could have filled an entire bucket with shells, to be honest, but I was mindful and gathered only a few. 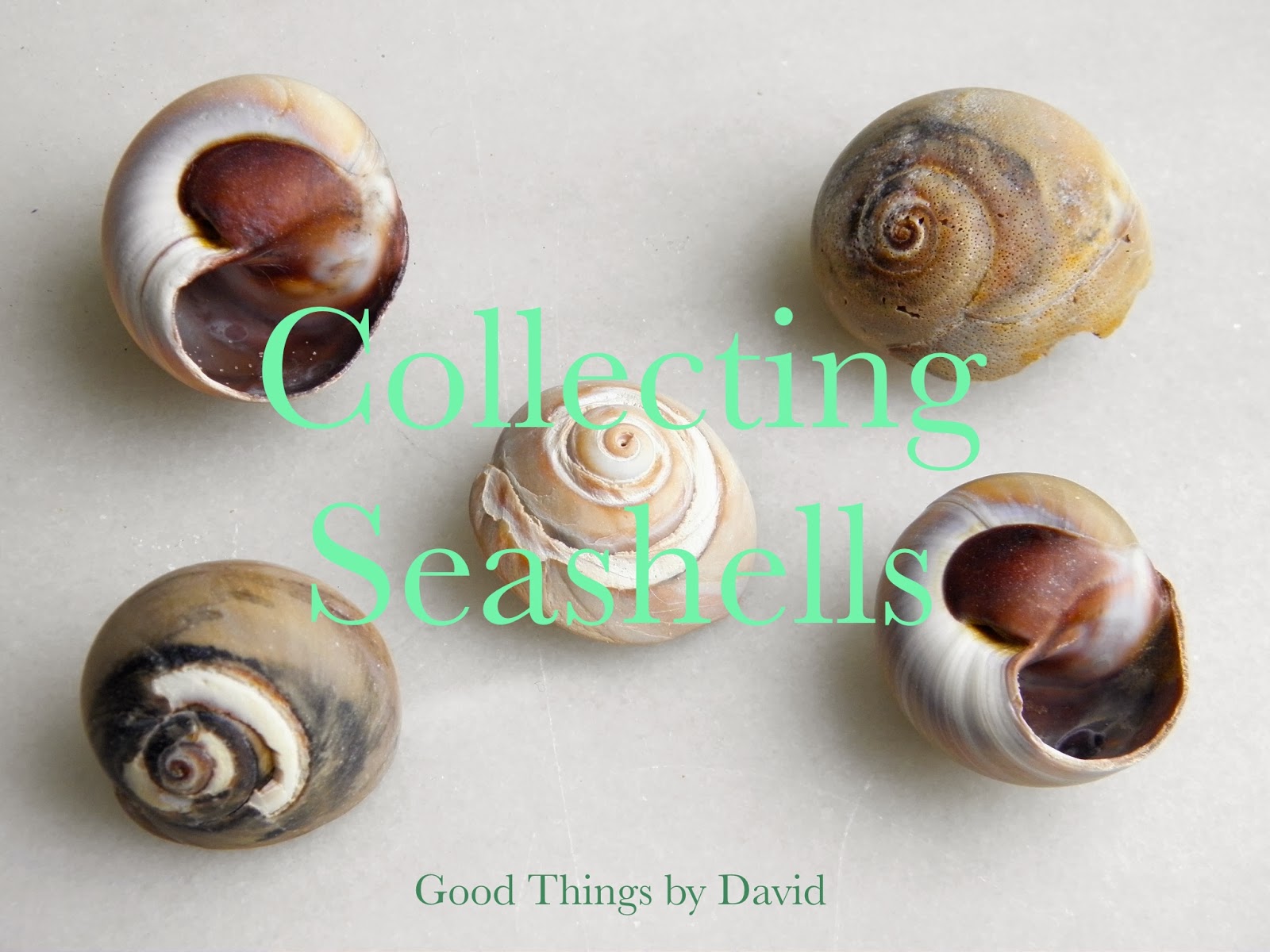 Small, dark-colored shells were the first ones I picked up because they looked so beautiful against the damp sand.  These particular ebony-like shells were easy to spot.  They almost seemed to glimmer whenever we’d walk past them.

As you can imagine, many of the shells were either imperfect or broken, but every once in awhile we would come across some that we just had to pick up.  With a modest amount of them in my bag I began to look at other shapes, colors & sizes. 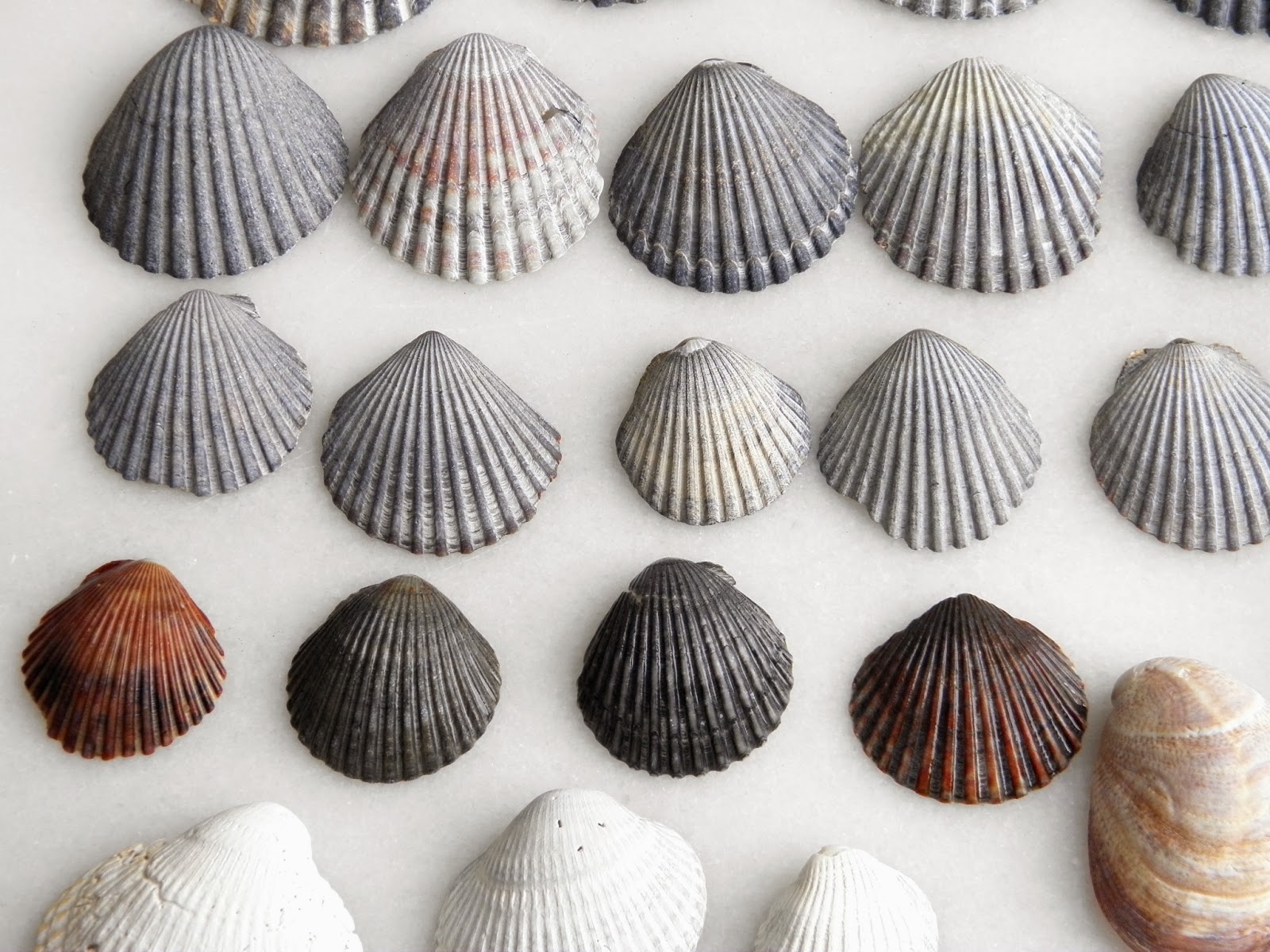 Once I got back home and rinsed all of my finds I started to think of my dining table and how I could use some of the shells.  The smaller ones (above) became a pale gray as soon as they dried.

It's only while they are wet that these shells darken. 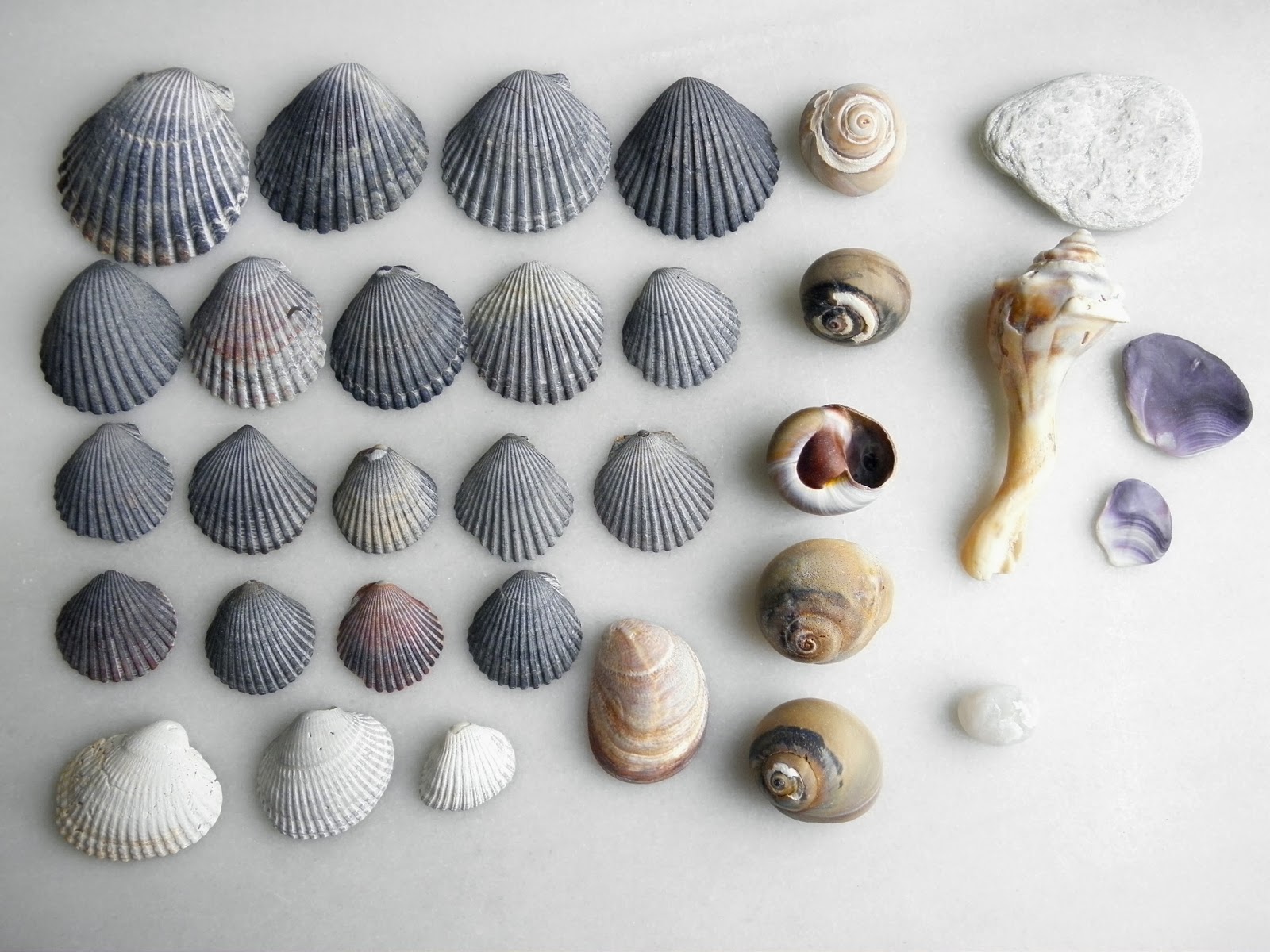 As you can see I only gathered a small amount of shells and stones.  Finding the whorls (I think they're snail tail shells) in the center of the photograph was somewhat of a scavenger hunt for us.  Again, most were broken into bits and pieces.  Although there were many stones for the taking I only picked up 4 of them, such as the violet wampums.  I felt lucky to have found that inner core of whelk. 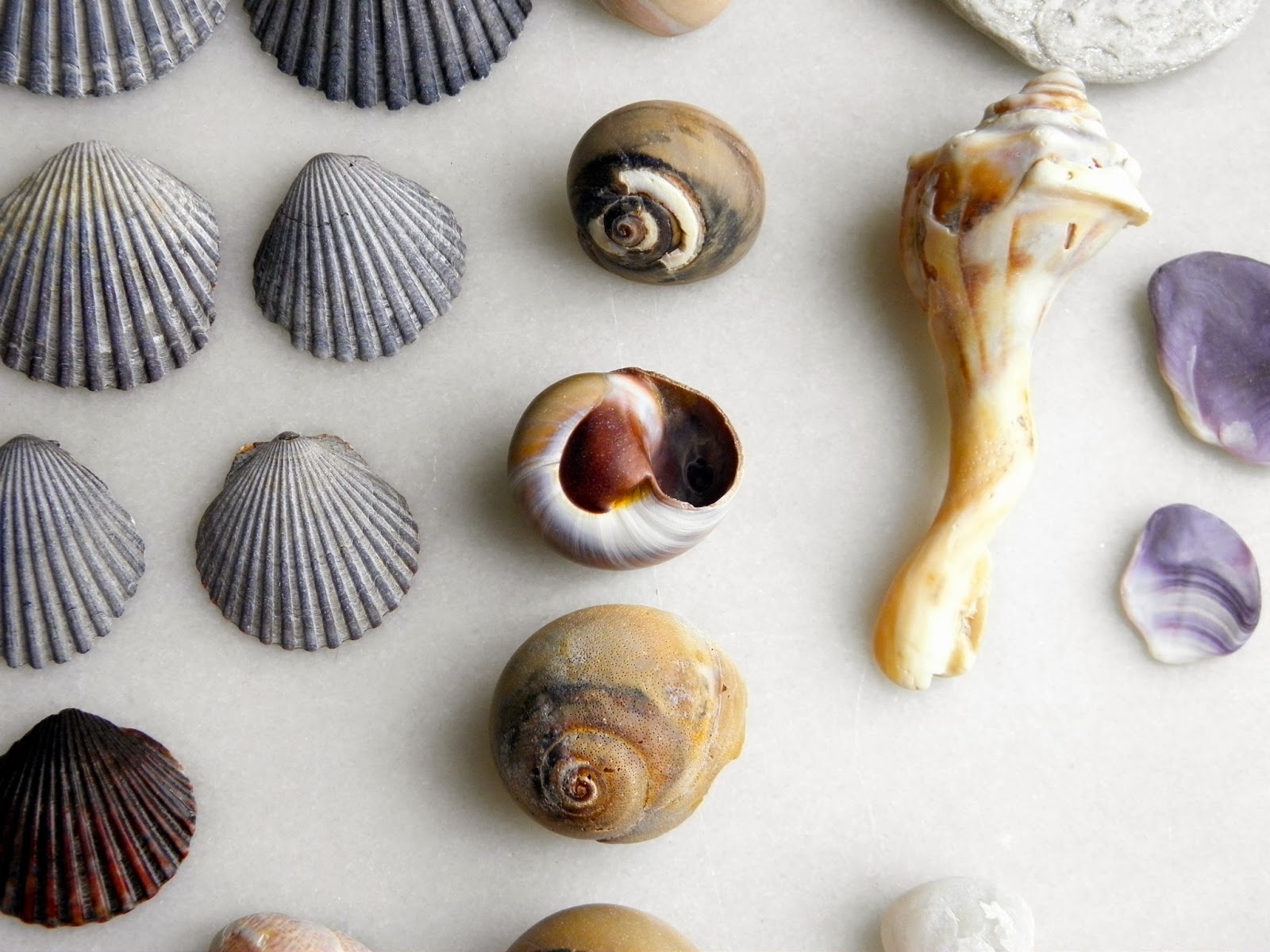 I love the variegated creams, browns, grays and purples. 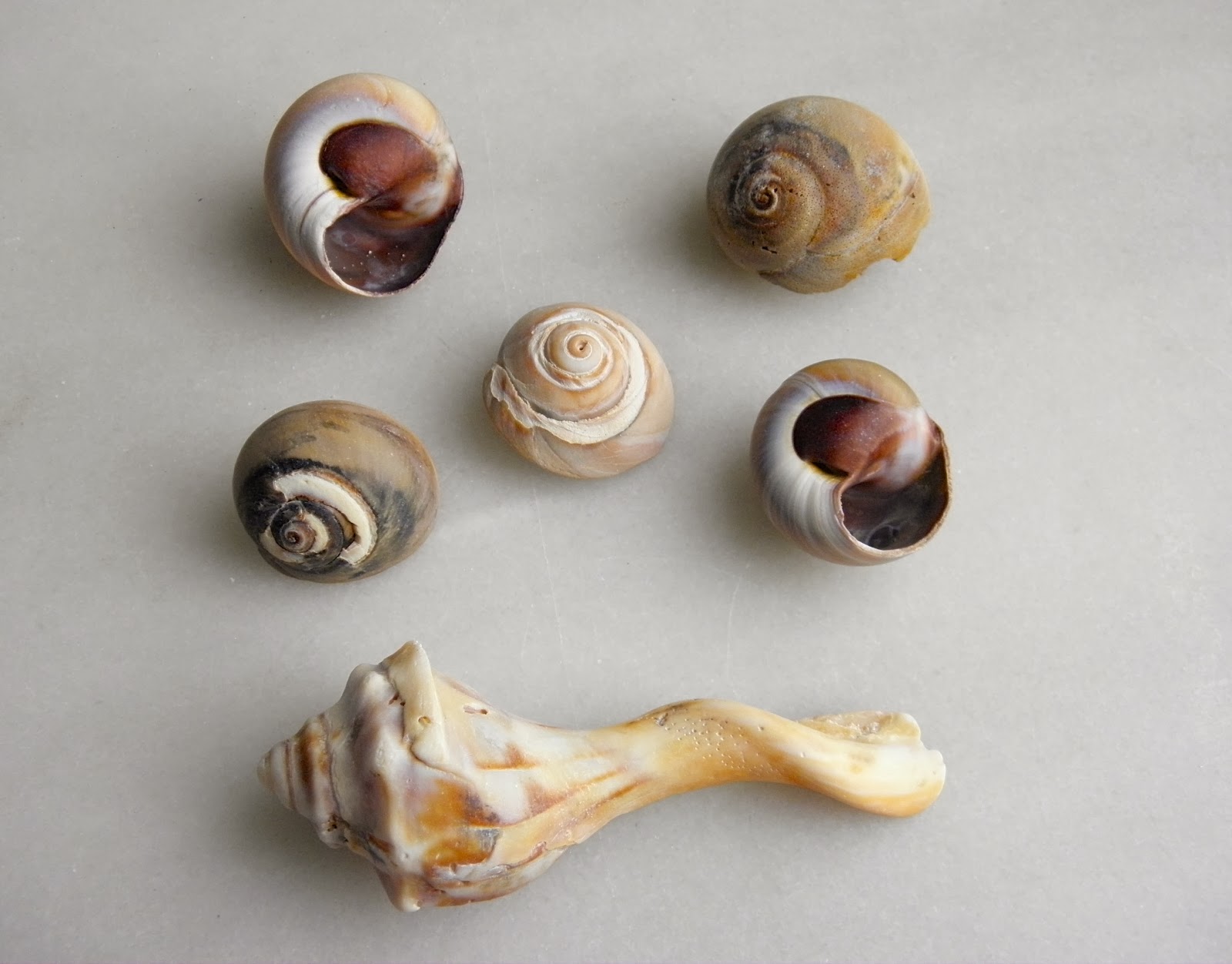 That inner core from the whelk is so beautiful, don't you think?  It's amazing how it spirals and forms that shape. 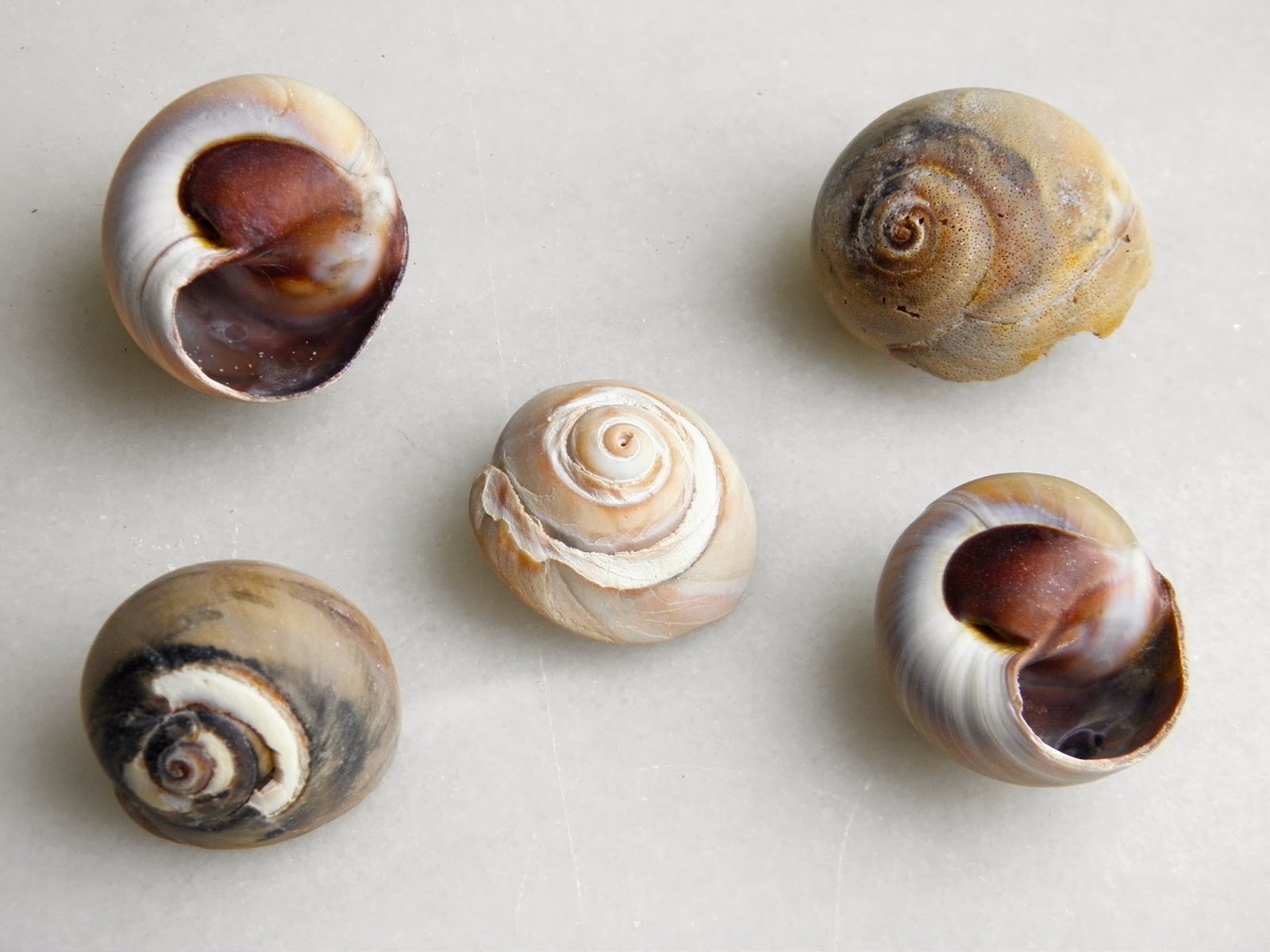 The snail tails (we kept calling them whorls) had so much sand in them that days later, after I had thoroughly soaked them, they were still depositing bits of it. 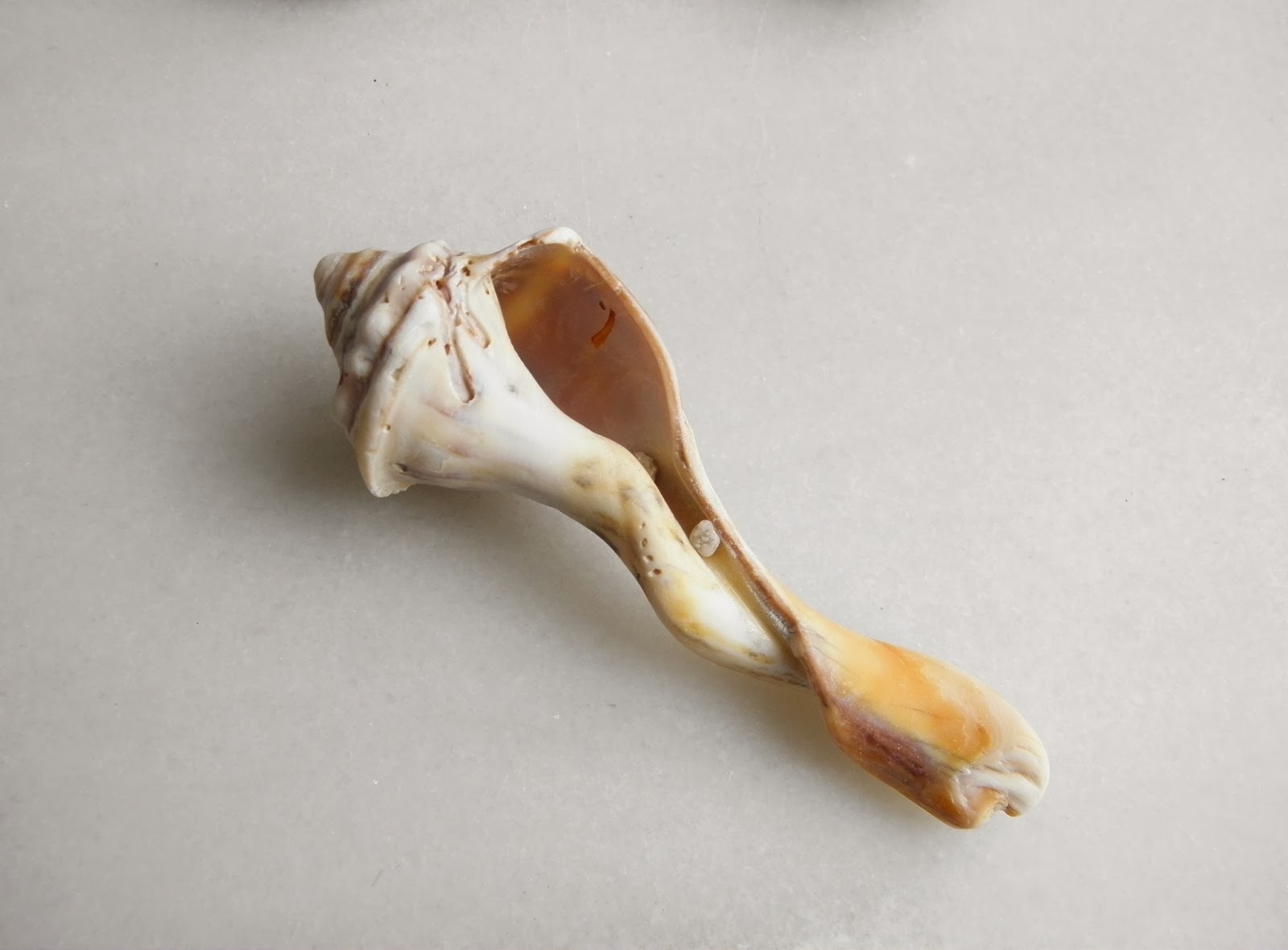 As you can see, this whelk has some embedded stones that may or may not be Cape May diamonds. 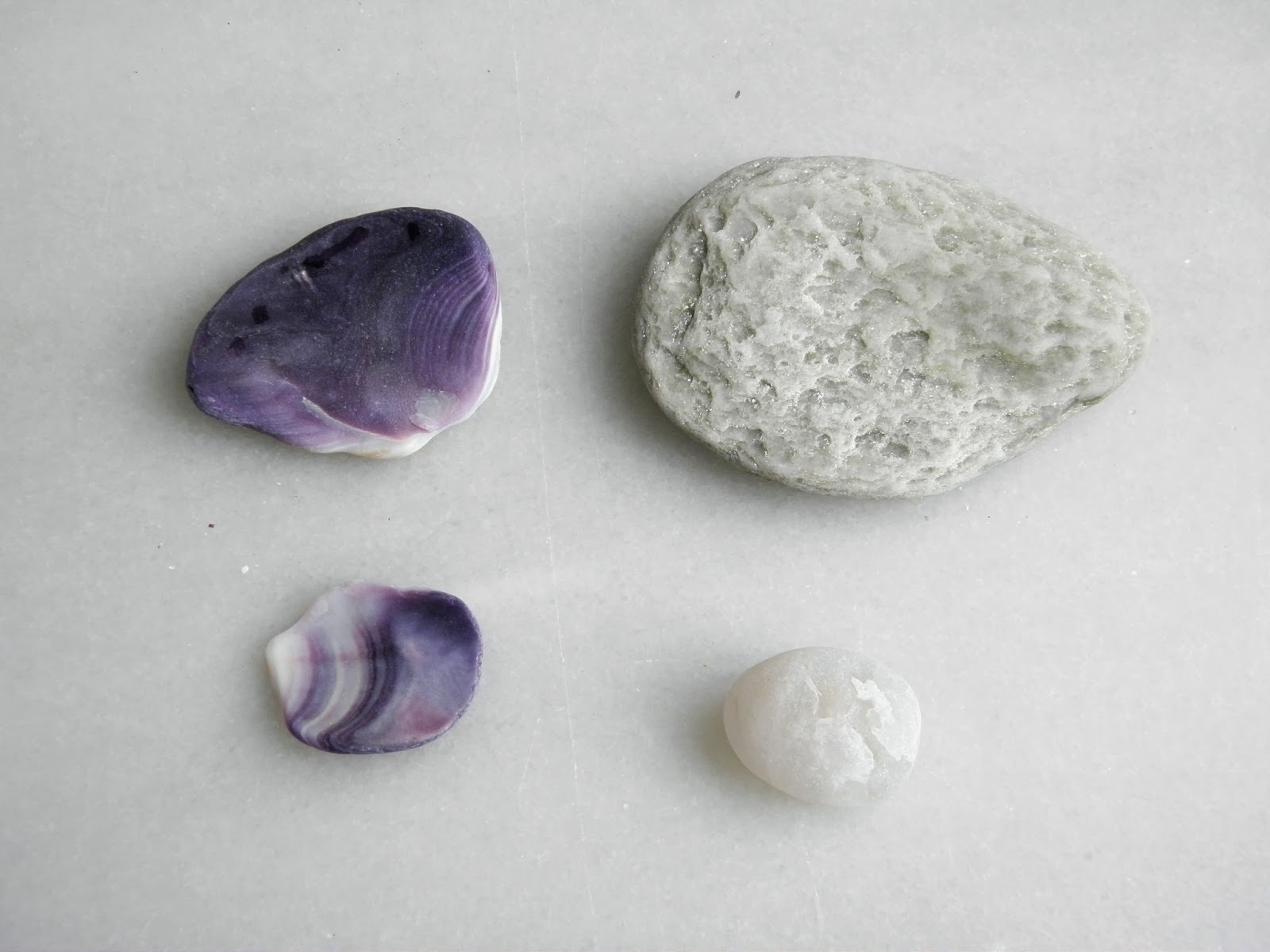 I only found a couple of wampums so I had to bring them home.  That large stone on the upper right has such a wonderful texture and that round, soft-white stone on the bottom right is what is known as a Cape May diamond.  These 'diamonds' are almost translucent when they lie in water and many people come to this beach just to look for them.  It almost blends in with the Spanish macael marble on the counter. 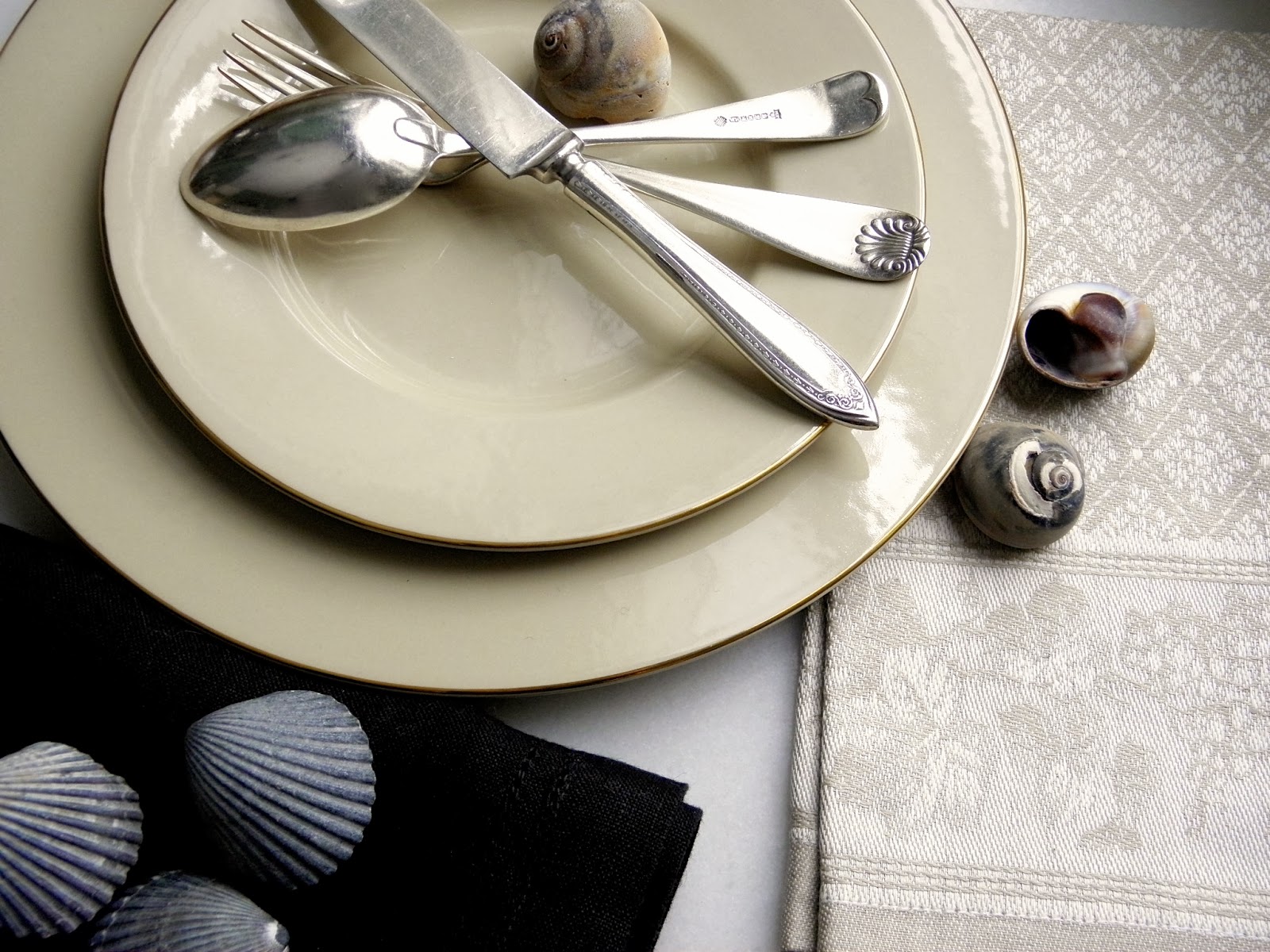 This is what I envisioned while on the beach.  Old silver, Wedgwood drabware, natural linens in black and flax to set a table with some of the shells. 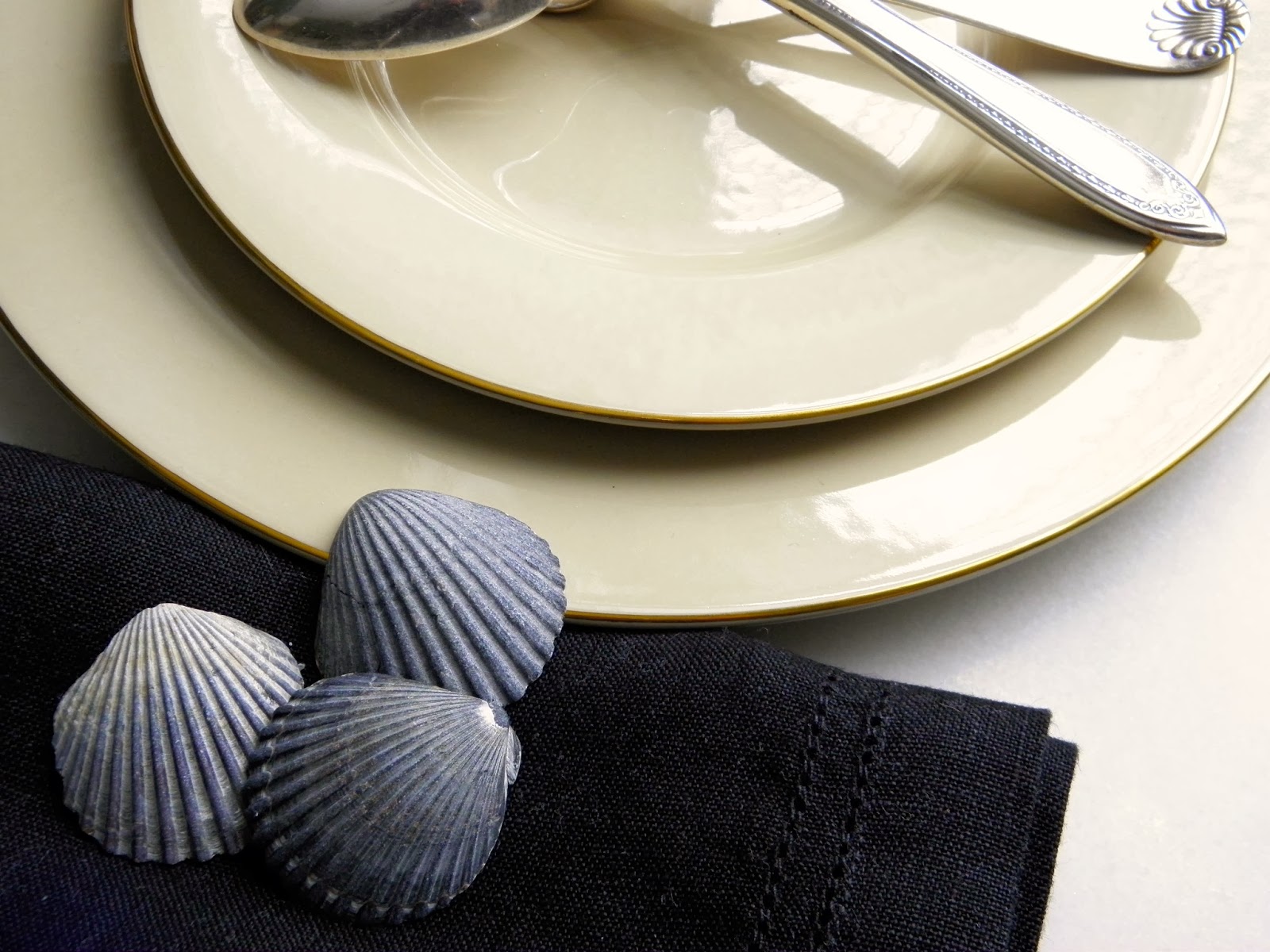 The colors work well together. 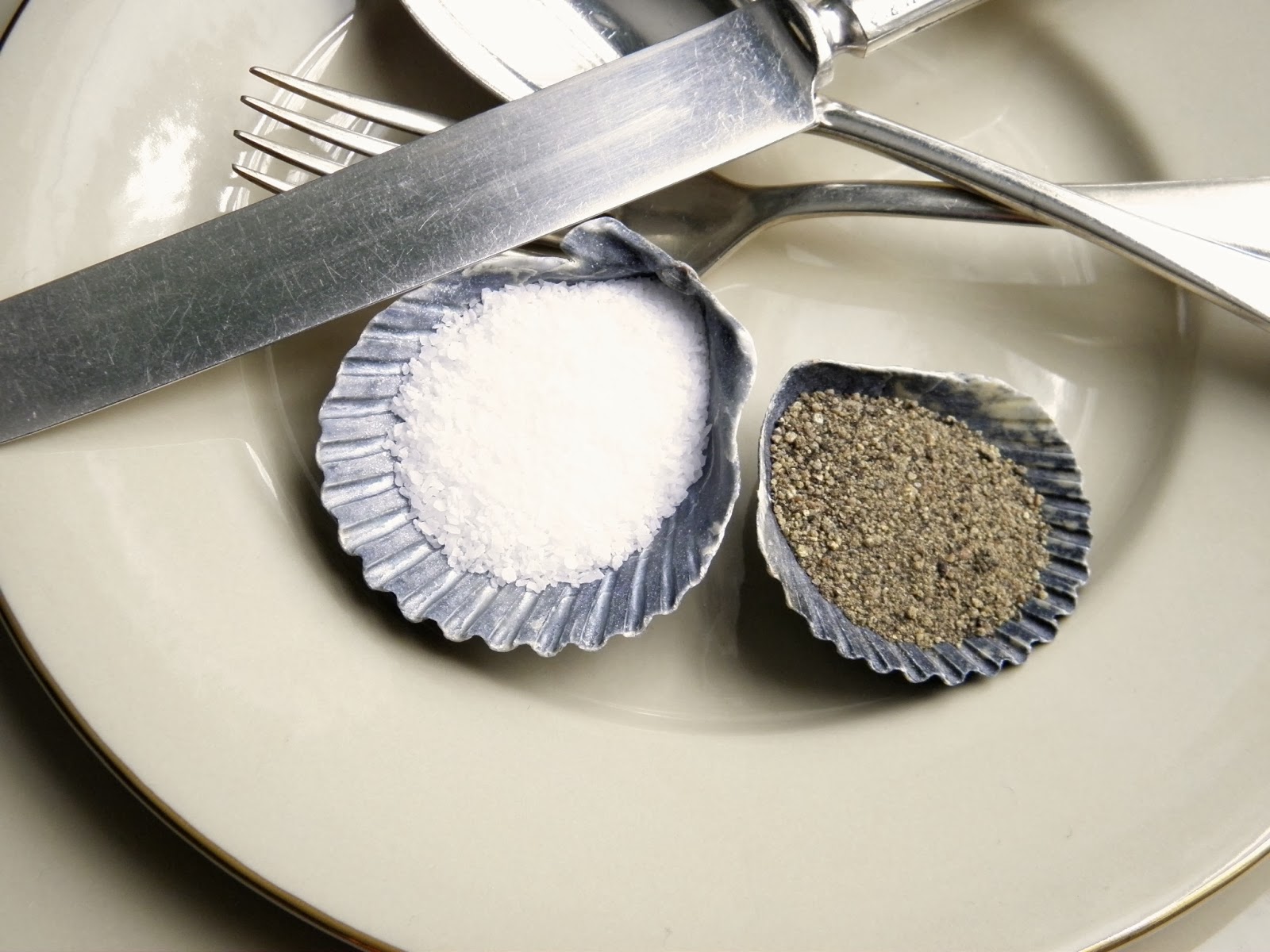 A shell used as a salt cellar is a nice way to bring a bit of nature to the table from one of my favorite places in the world. 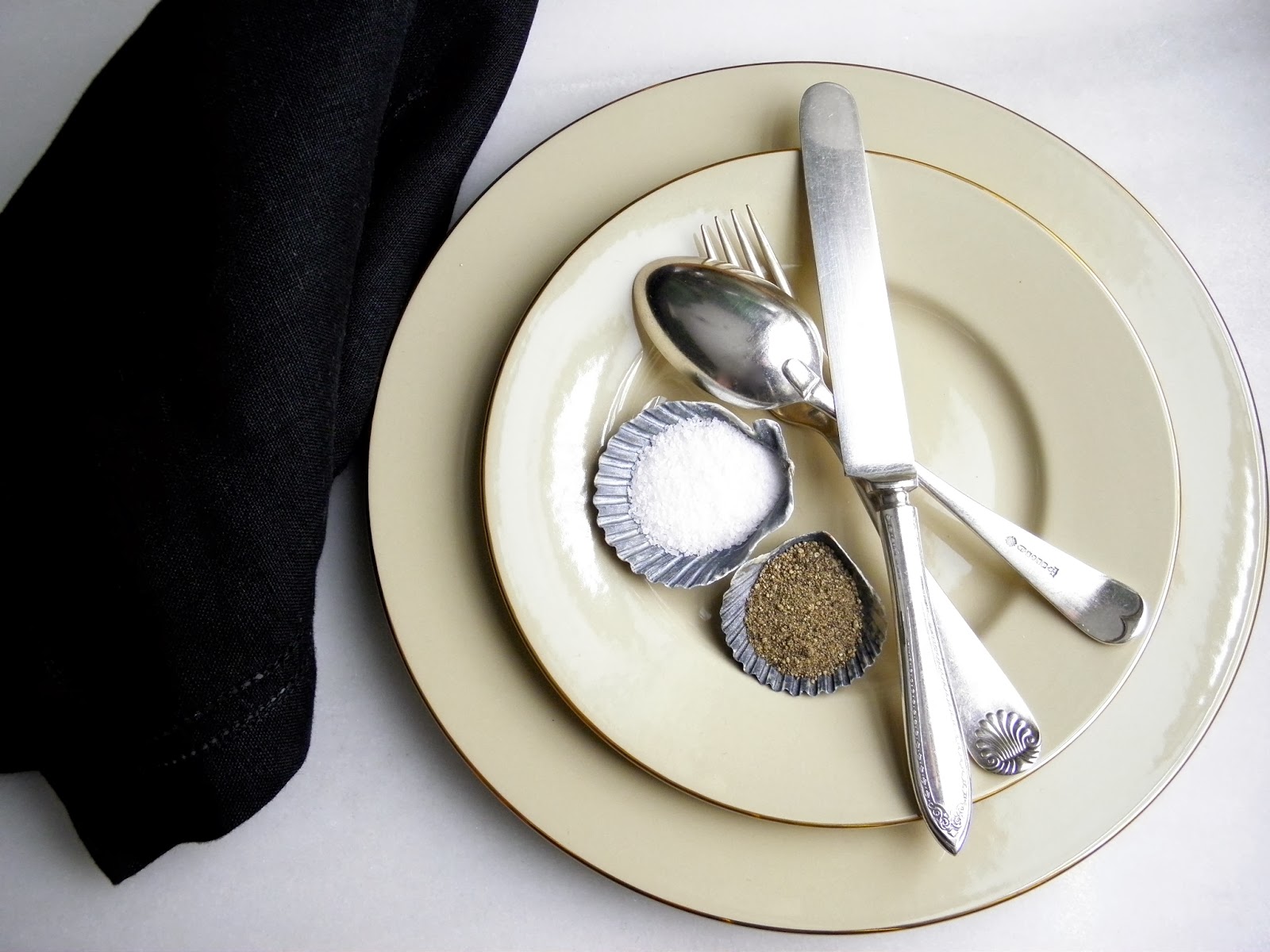 I normally don't like to set a table with really dark linens, but I do own some that I mix and match with other colors for a bit of contrast.  For this table I envision perhaps a flax-colored tablecloth with the Wedgwood china, gilt-rimmed stemware, this old silver I picked up at an antique store many years ago and some ink-black linen napkins.  A salad to begin the meal and maybe some diver scallops as the main course sounds wonderful to me.  What do you think? 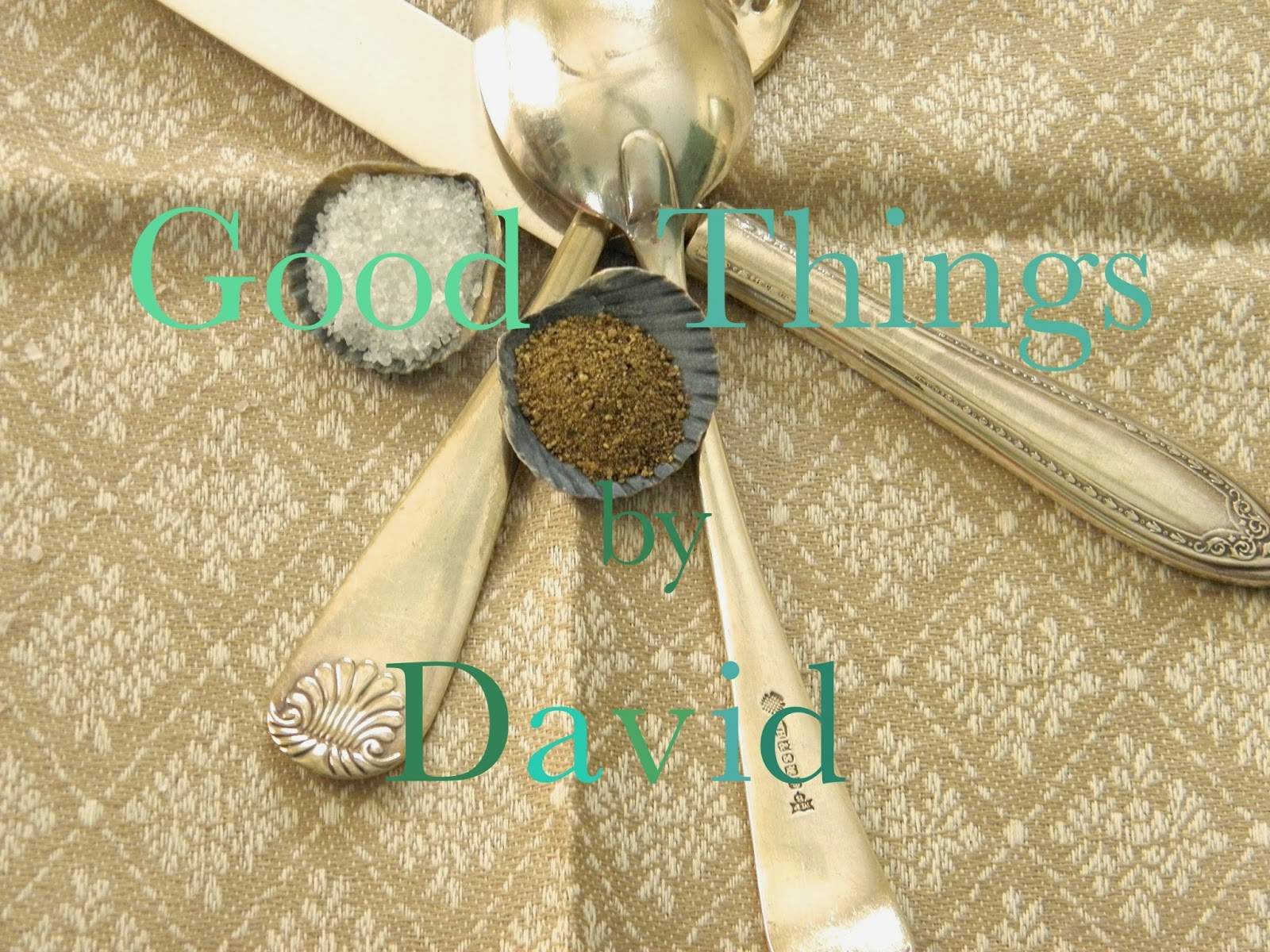 It’s always fun to get creative by giving some unexpected finds a new purpose.  Using shells like the ones I gathered to set a nice table for guests can really get a conversation going, so don’t be afraid to think outside the box.  One doesn’t have to be formal when setting a table, really and truly, and if you must know, looking at nature for inspiration is always my go-to.  With just enough shells for eight place settings it’s going to be nice having them for special moments.