The Deer, The Fox & The Groundhog

Nature never ceases to amaze me.  With so much wildlife around our home, it's not uncommon to see various animals walking by our windows during the day.  Some of them have even become 'residents'.  It just so happens that we were given one of those special and rare occurrences that can only be believed if seen firsthand.  Thankfully my camera is always at the ready!

A small miracle behind our house between a groundhog, a fox and a deer turned into something out of Peaceable Kingdom the other day.  It's almost as if these three characters decided to put on a show for us and behave quite civilly toward one another.  Yes, I was chuckling in between photographs, but really, it was rather jaw dropping to observe how mindful these creatures were of each other.

This is pure entertainment! 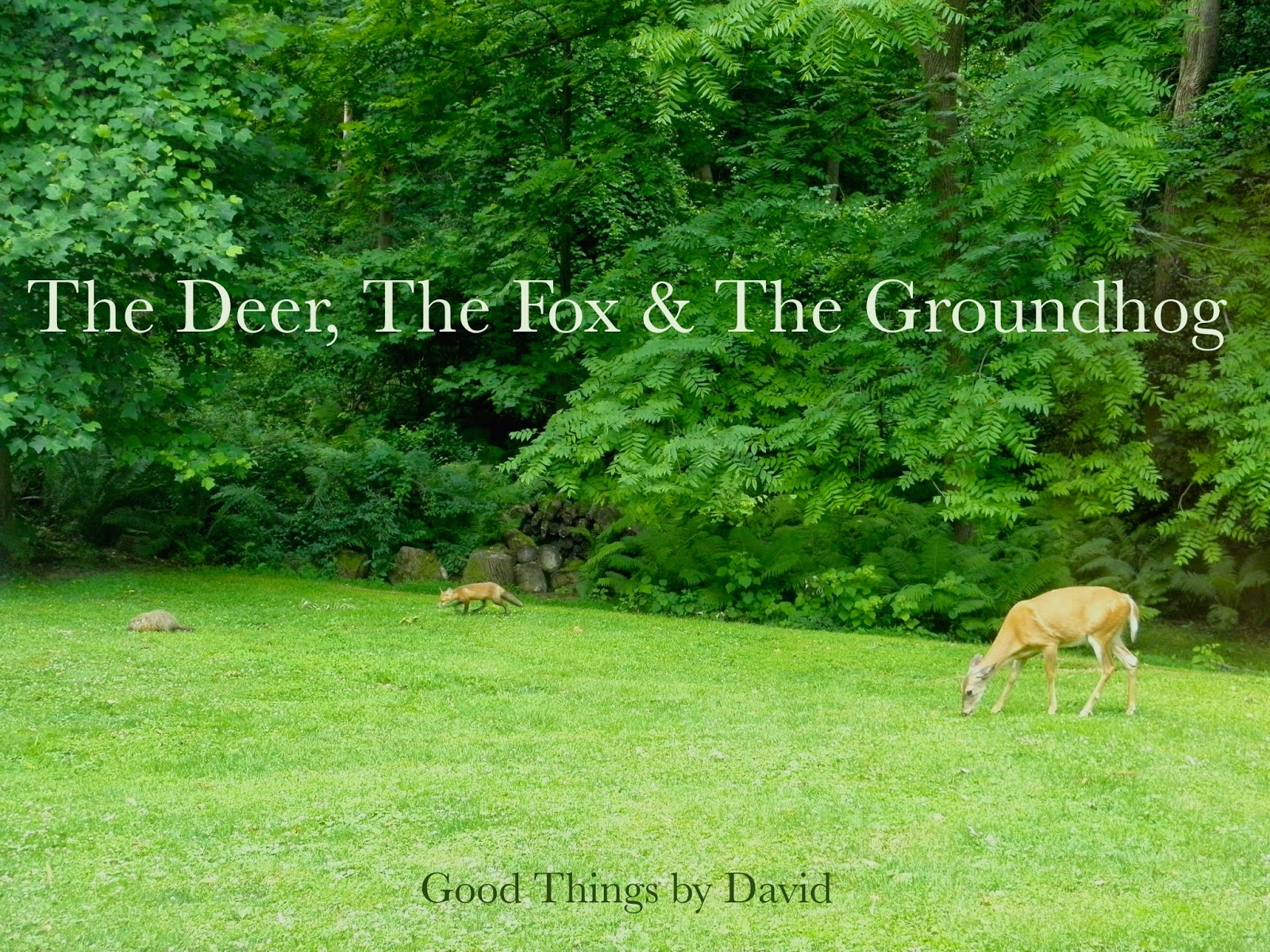 You can see our resident groundhog, Henry, to the far left nibbling on some thick grass.  The fox who isn't fully grown yet, is right in the center and looks as if it's going to attack.  It didn't.  The deer is on the right. 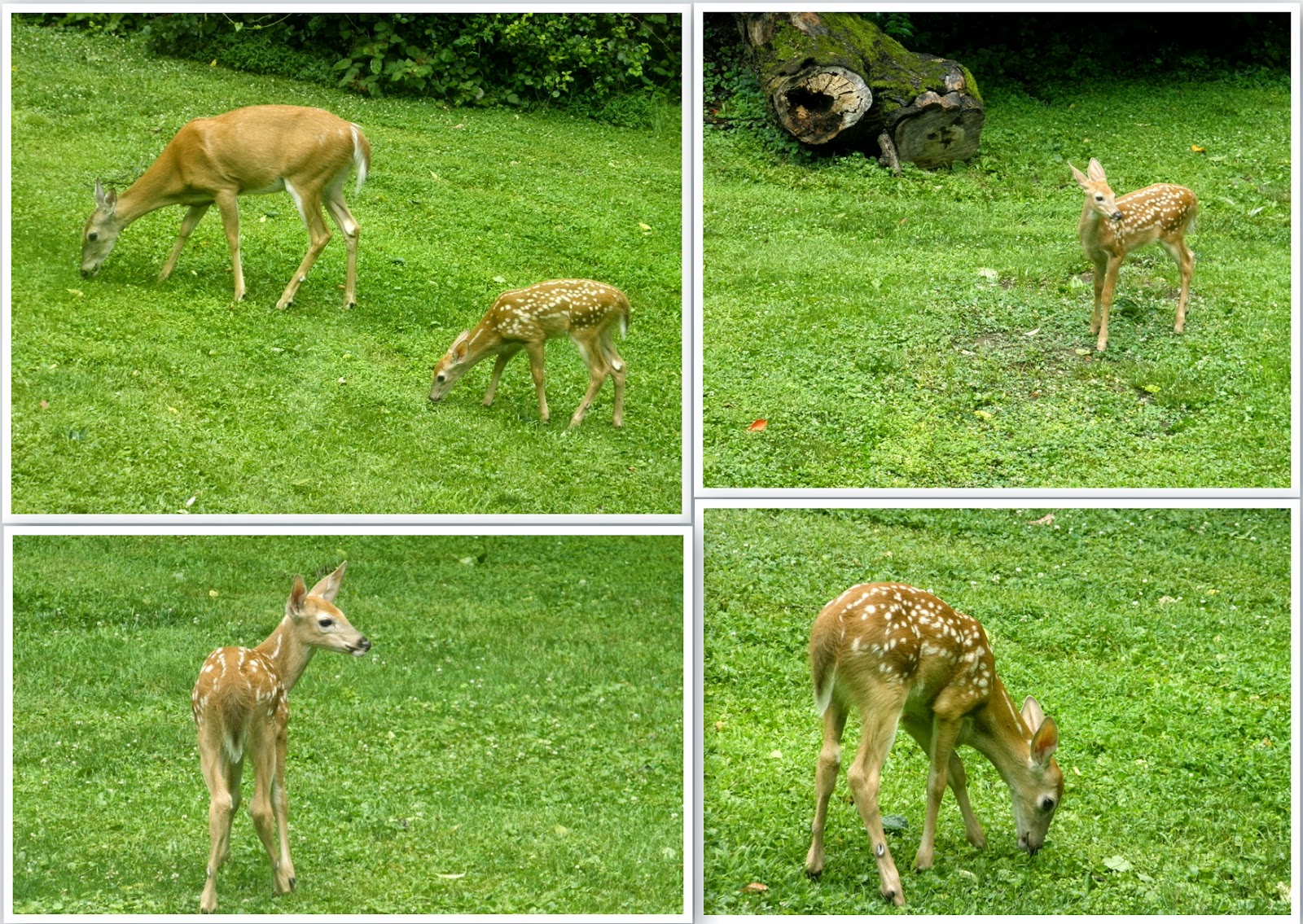 A mother and her fawn have been spotted around our residence these past few weeks.  The baby stays very close to its mother, but once in awhile it does run around wildly, bucking & jumping every which way. 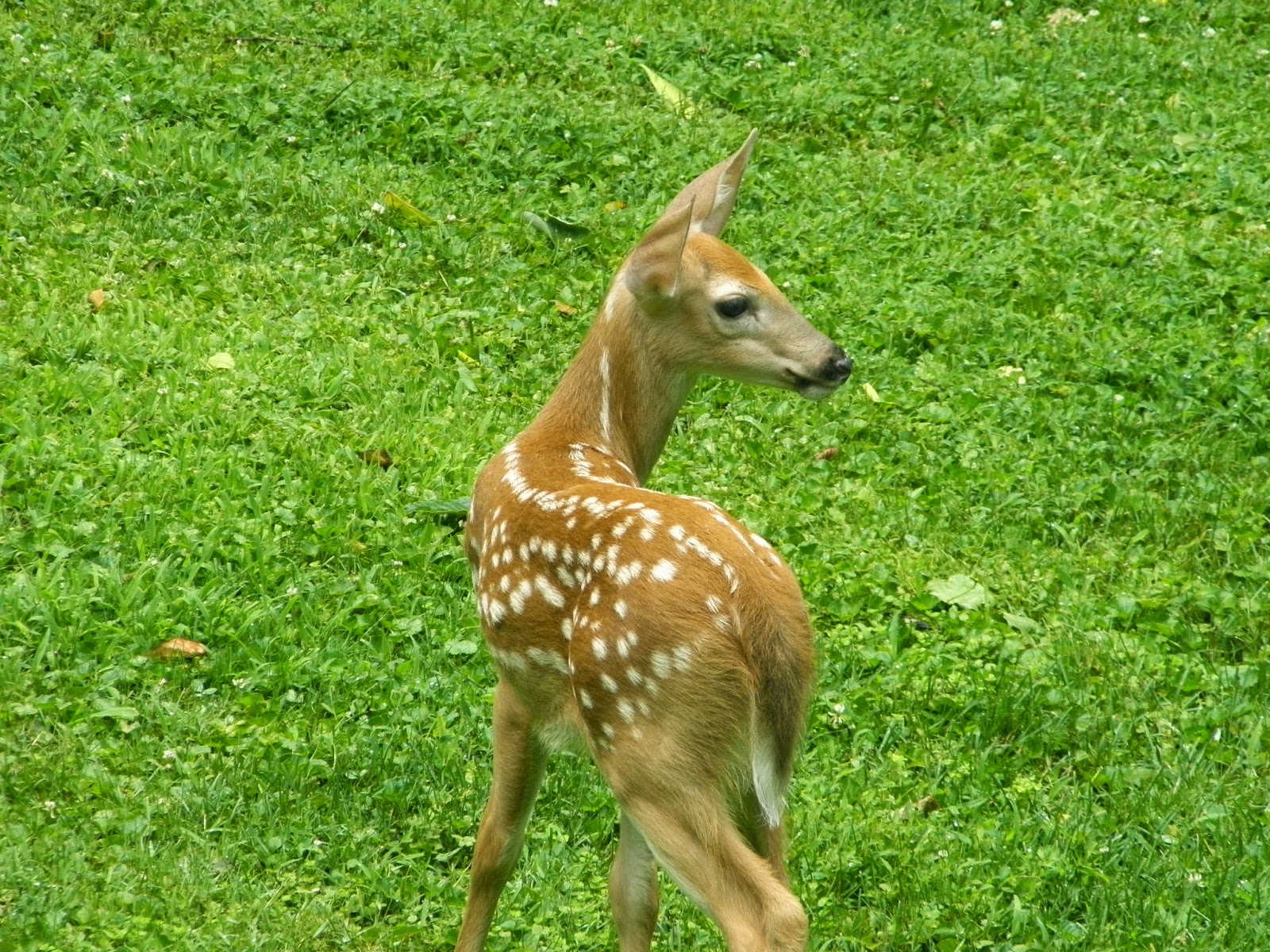 The little one has such an adorable face. 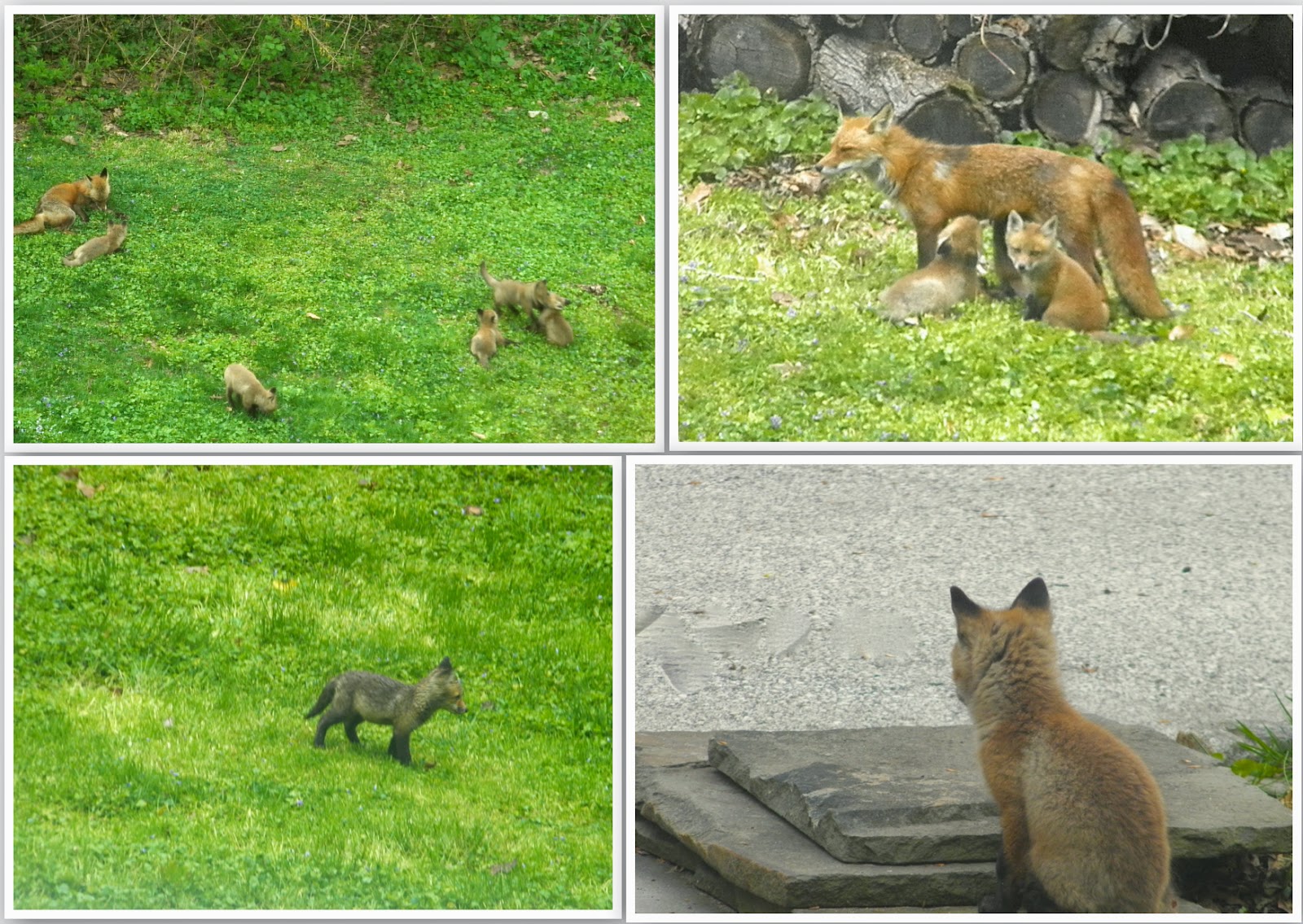 A den of foxes has taken up residence here just beyond the hill.  During the spring a couple of foxes gave birth to several kits; we counted 7-8 kits in total.  It was so beautiful to see the babies playing with one another, nursing and even waiting for their mother to come back from a hunt.  At the beginning, the kits were a very dark brown color, but as time went on, their coats became that familiar reddish hue.  On several occasions we spotted one particular kit (bottom right) sitting on the slate steps waiting for its mother to come back from her hunts. 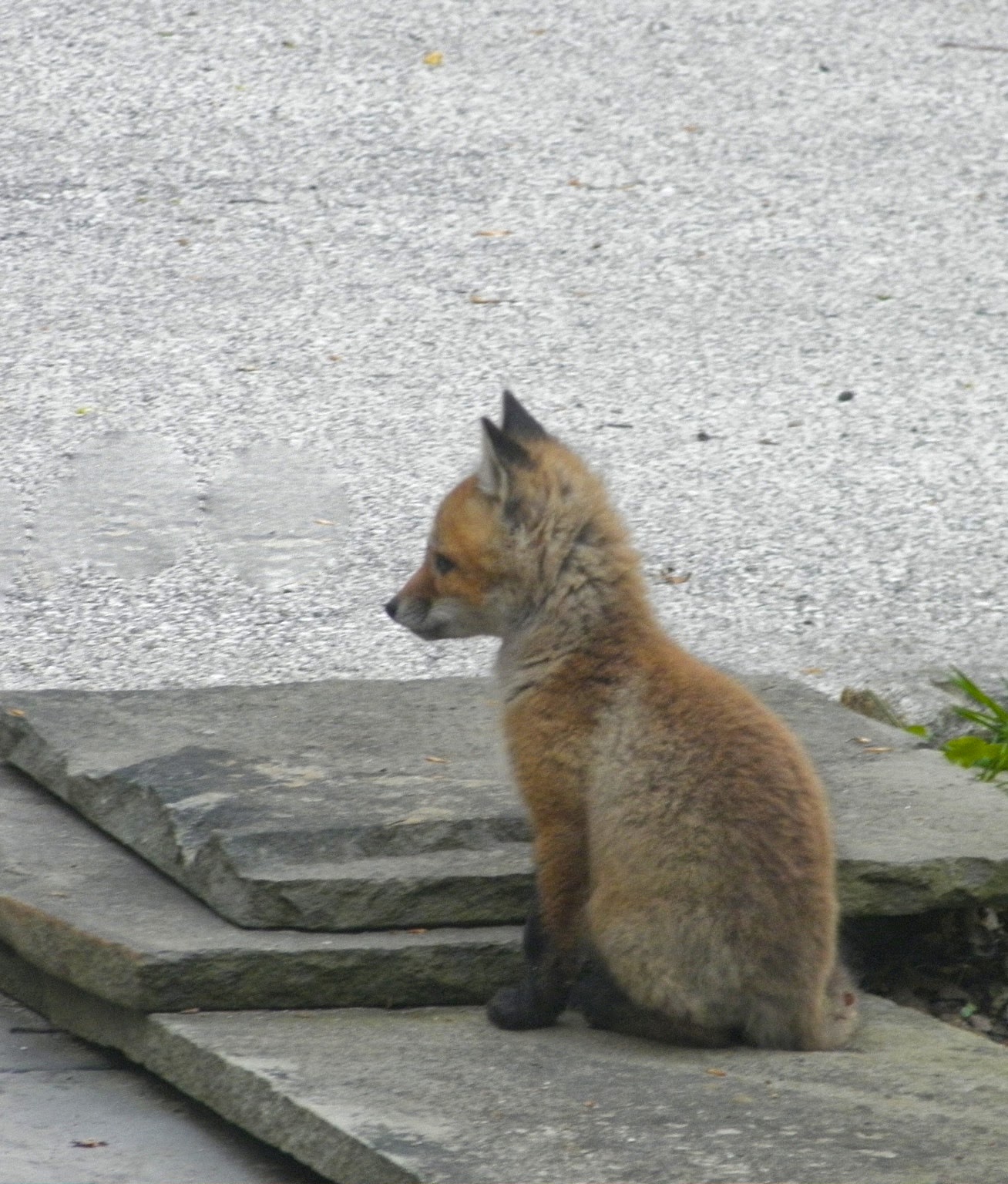 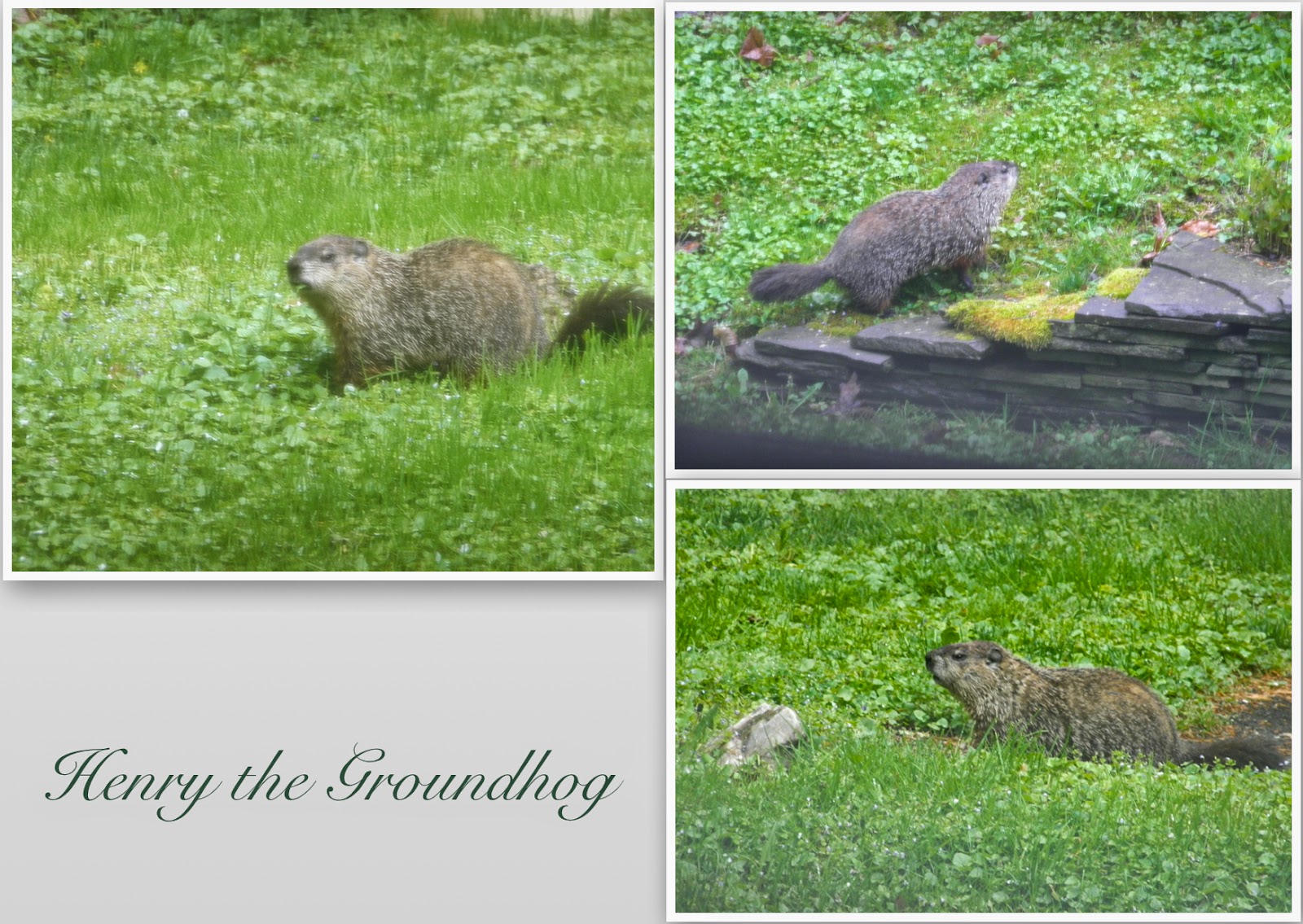 Our beloved groundhog, Henry, has survived several years of harsh weather and predators.  I realize that many individuals view these creatures as nuisances, but since there is so much space here, Henry does as he pleases.  He always brings a smile to our faces. 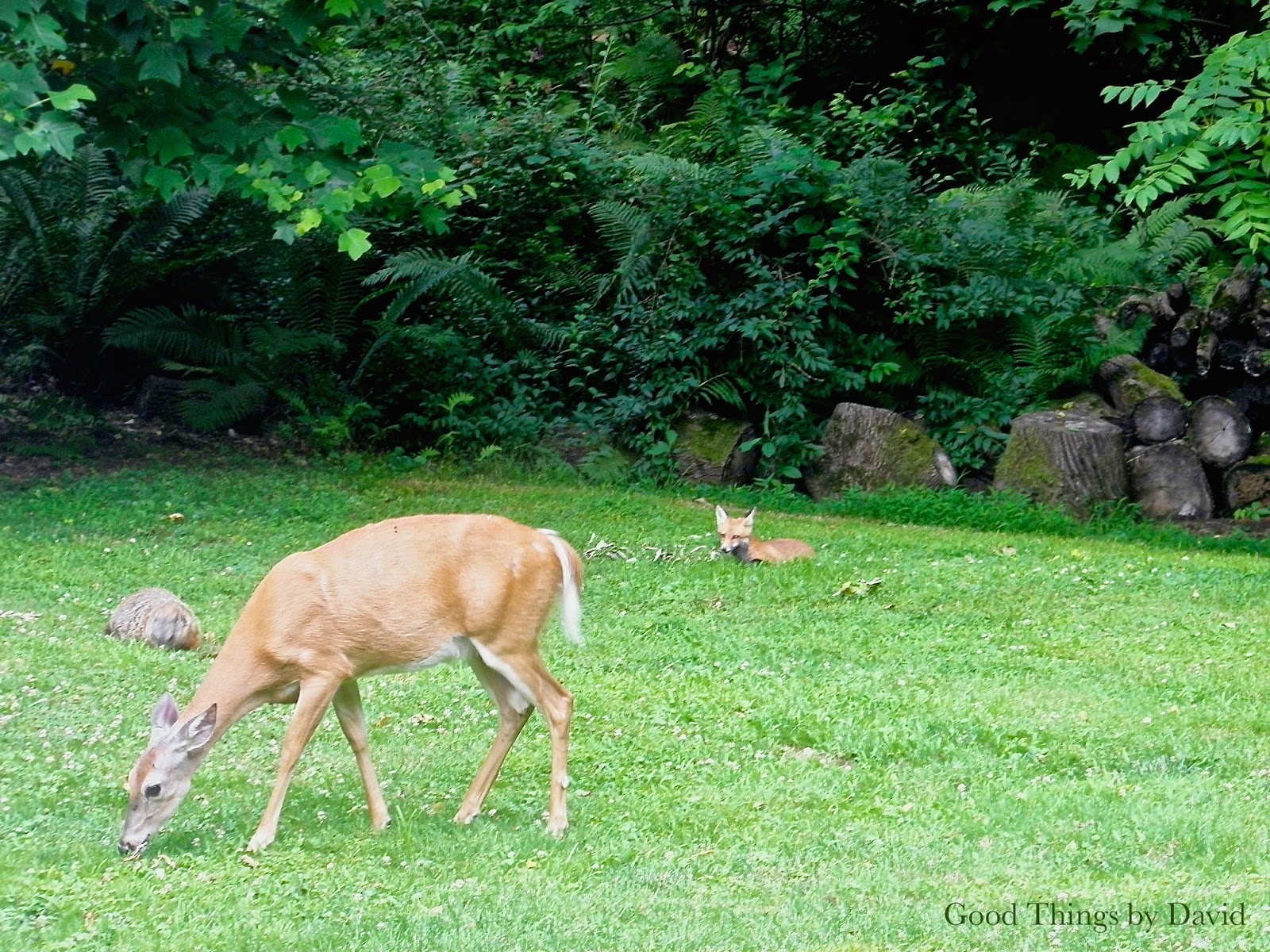 The silly trio behaved as if it were just another regular day for them.  I've only ever seen two of these animals near each other, never all three at once.  The adorable fox was so well behaved! 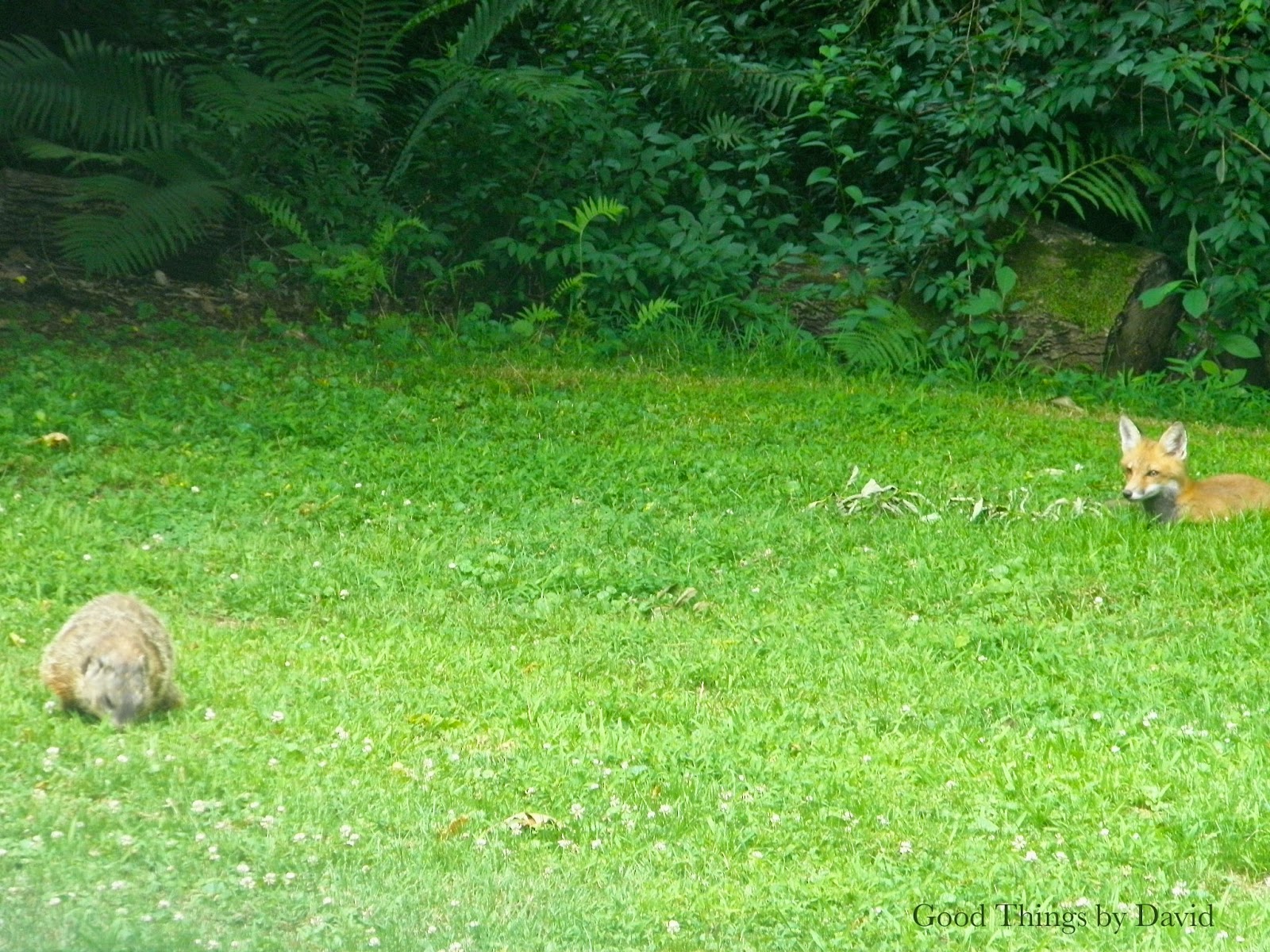 For a few moments we thought the fox was going to try and attack Henry, but he didn't.  The fox decided it was best to just lie there and take a rest. 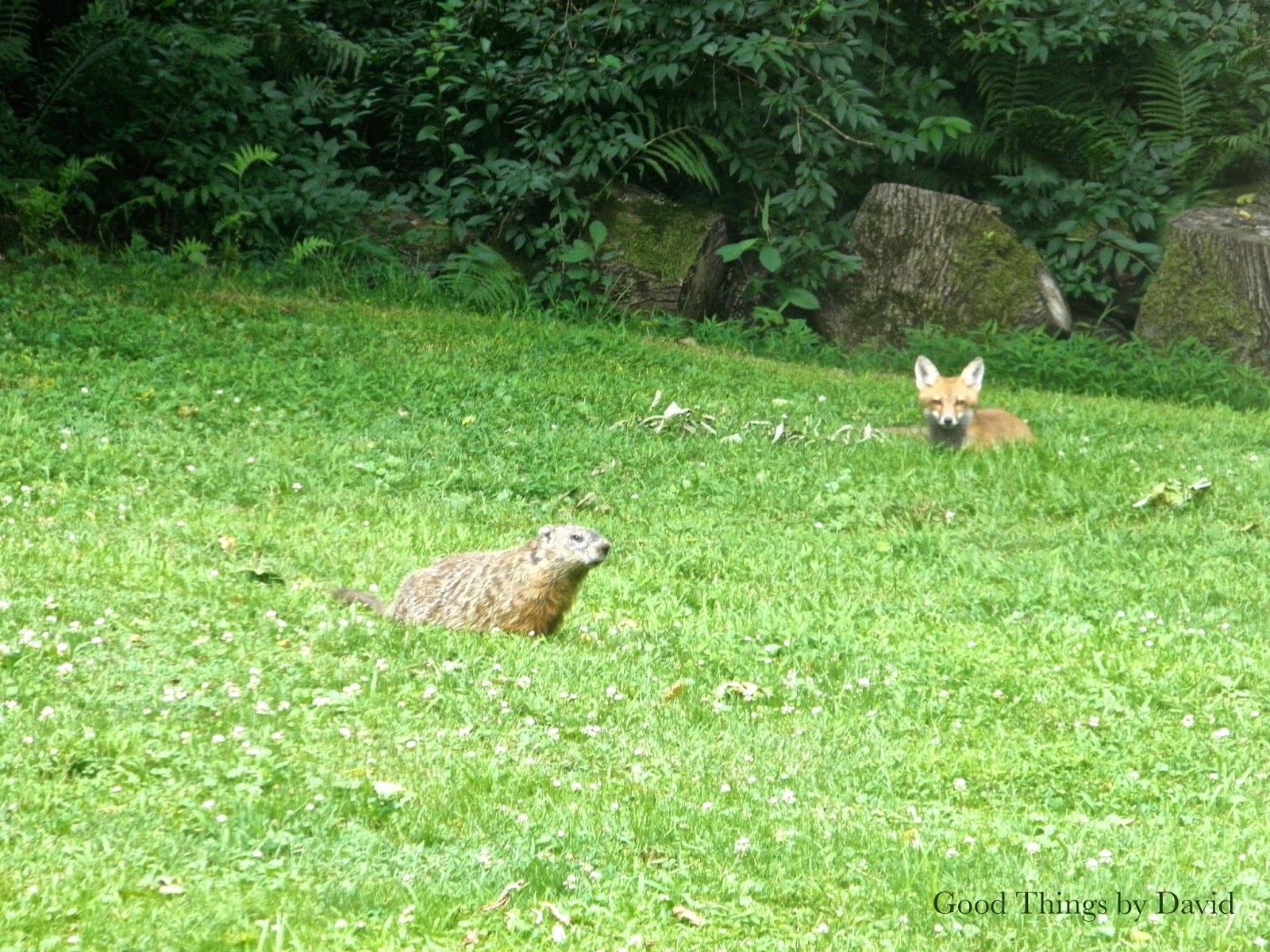 Here they are mugging for the camera.  As if on cue, they both turned to look at me.  How cute are they? 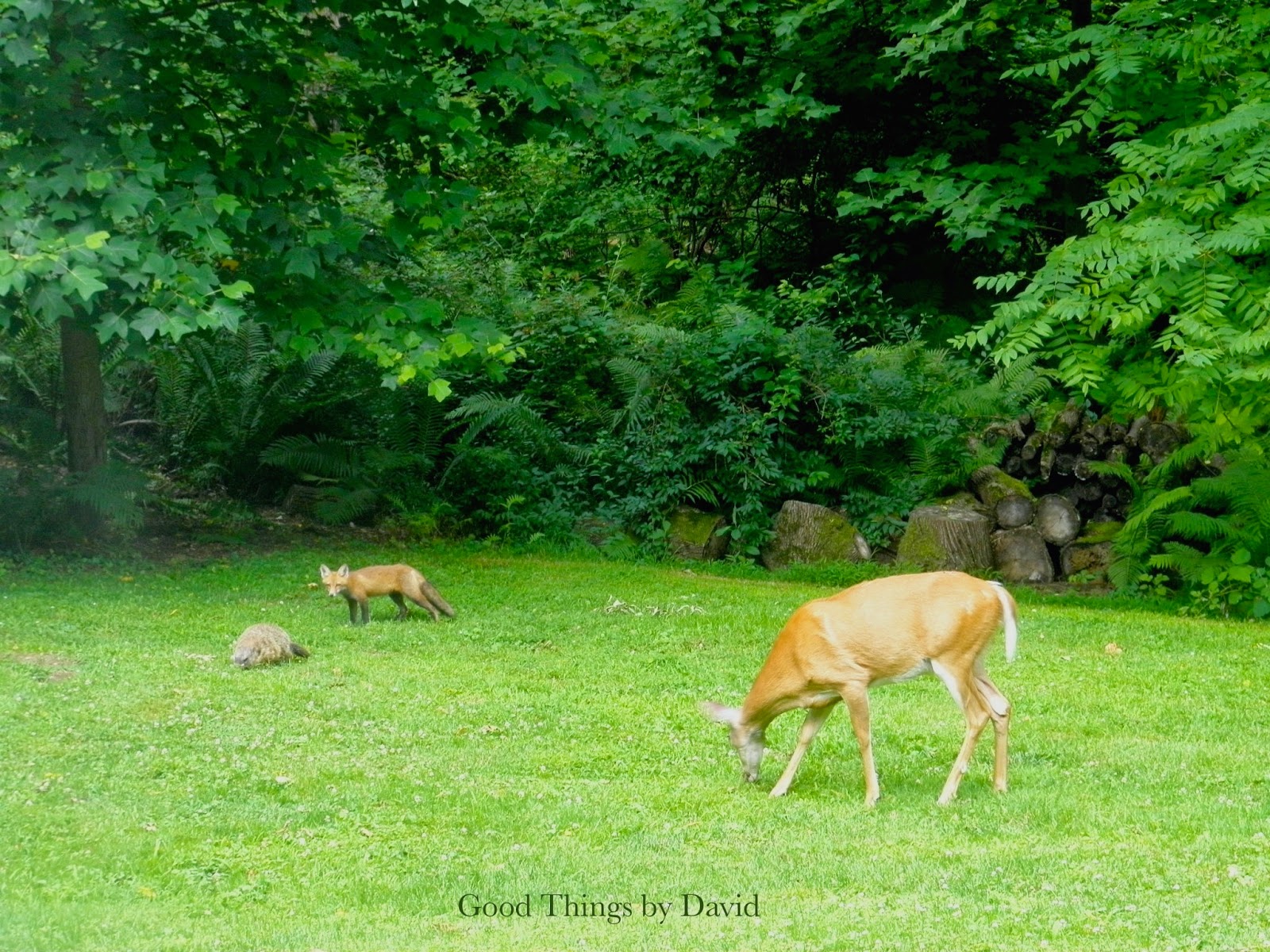 So it's not quite Peaceable Kingdom since there wasn't a lion nearby, but it's still remarkable to me.  I don't think I will ever witness this scene again, since Henry pretty much keeps to himself.  Perhaps Henry is mellowing out in his old age.  Who knows?

It was by pure chance that all three animals came together to pose for the camera and I'm only glad I was able to keep a steady hand while taking these pictures.
Email Post
Labels: Home and Garden Summer