The blizzard named Jonas which hit a good section of the east coast over the weekend has been on the news around the world.  People near and far have sent me emails and texts expressing their concern for our safety, so I thank you for being in touch.  We're doing well and have not lost power.  Thankfully! 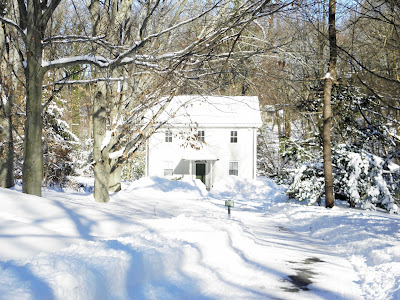 Looking at photographs that some of my friends have been posting on social media, it seems as if everyone received a substantial amount of snow around their area.  A friend in the Lehigh Valley of Pennsylvania measured 35 inches in her backyard this morning.  From what I've been reading, Manhattan received over 2 feet.  Here in Montgomery County, just outside of the city, we got about twenty inches of snow, so we certainly had our fair share.

I was able to take several photographs throughout the weekend of the snowstorm, and I even captured a small video clip while standing on the front porch Saturday evening. 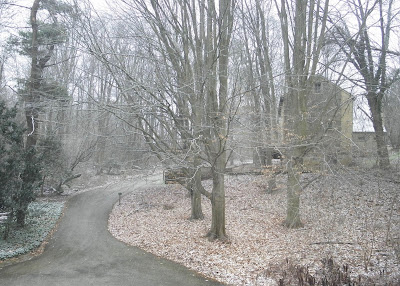 This photograph was the calm before the storm.  We had had a dusting of snow a few days prior to Jonas, but it was nothing compared to what we would wake up to Saturday morning. 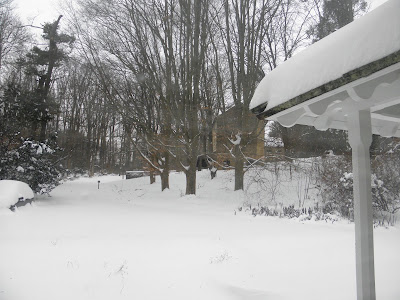 When I came downstairs on Saturday to brew the coffee, this is what the front of the house looked like early in the morning.  You can barely make out our car on the left. 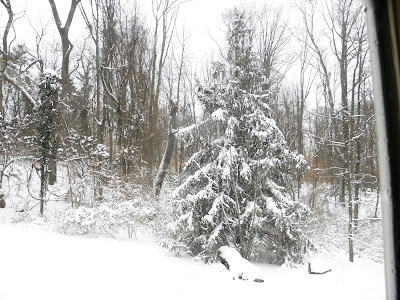 Taken from one of the upstairs bedrooms, you can see how wonderful everything looked behind the house. 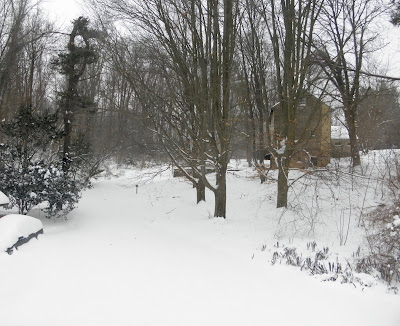 The driveway was nowhere to be seen. 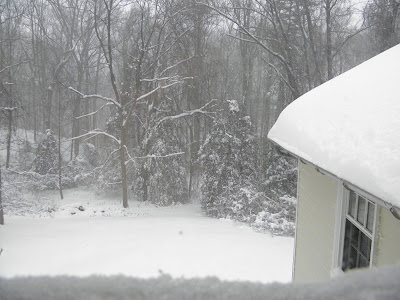 Every window throughout the house had snow accumulation, and as you can see from this angle, even the gutters were completely covered. 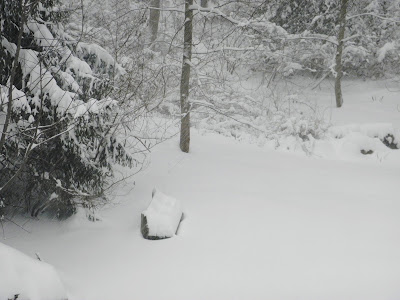 That is a bench.  A snow-covered bench. 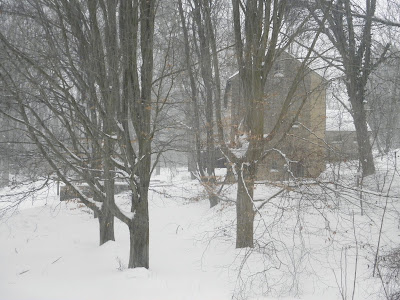 Between morning and late in the afternoon, we didn't receive a snowflake, but reports were telling us that more was on the way.  Sure enough, right before it was time to make dinner, the snow began to come down. 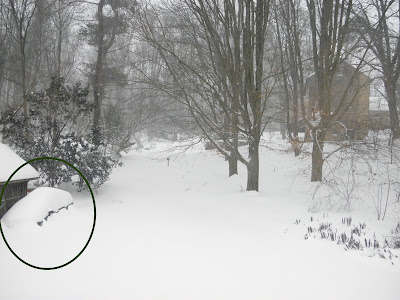 I sent this photo to friends and family so that they could see the enormity of what we were experiencing Saturday evening.  There is a car there under feet of snow.

I took this short video while standing on our front porch.  You can hear just how windy it was and how brutally cold it felt.  This was a blizzard! 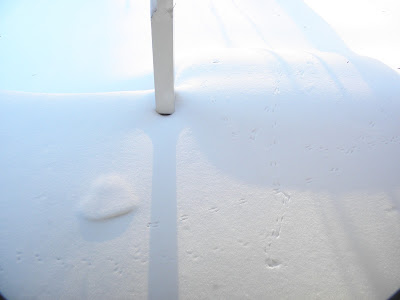 Sunday morning was a different story.  The back porch next to the home office was the scene of a few birds hopping and bopping to and fro.  That heart shape is a cooling rack that Michael Bonne made for me several years ago; I forgot to bring it in! 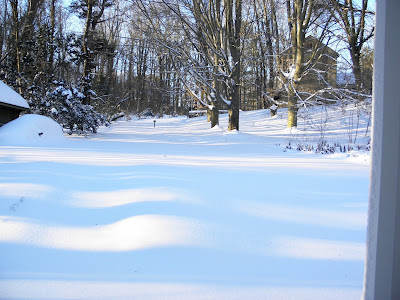 Standing on the front porch at 8 am today was rather serene.  Nothing could be heard except for a bird here and there.  The snow drift on the left is the car and you can barely make out the steps leading up to the driveway where the snow undulates. 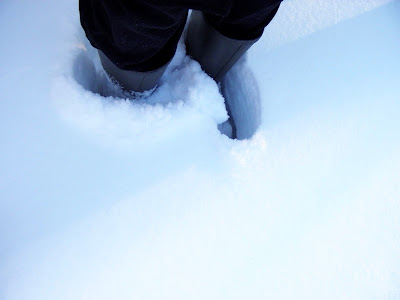 I put on my warmest wool coat and some rubber wellingtons before attempting to go out on the front porch.  Here I am standing on the porch.  I haven't even walked down to the first step and the snow is almost up to my knees. 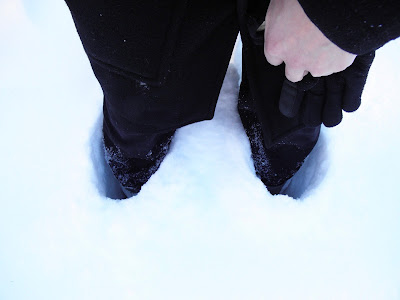 One step, two steps and down to the ground.  The snow was up to my knees, so approximately twenty inches.  This was a lot of snow. 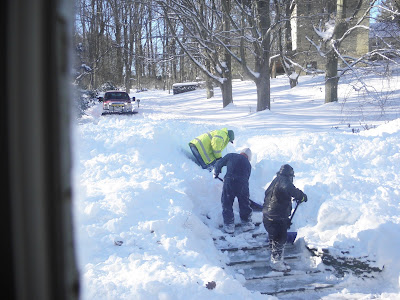 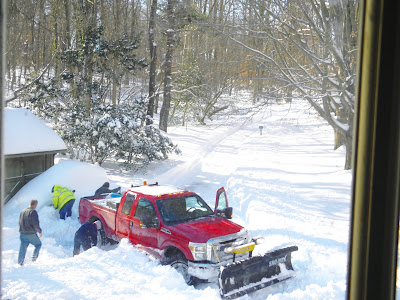 The crew thankfully arrived early to dig us out, but even the large Ford Super Duty pick up truck was having trouble navigating that driveway.  It got stuck! 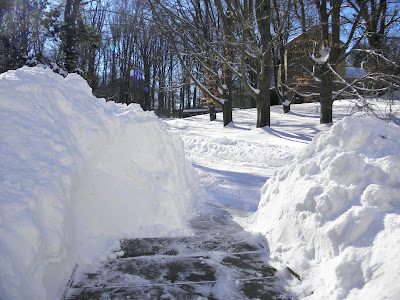 This was the scene after the crew left.  Mounds of powdery snow with just enough of a walkway to navigate out to the car. 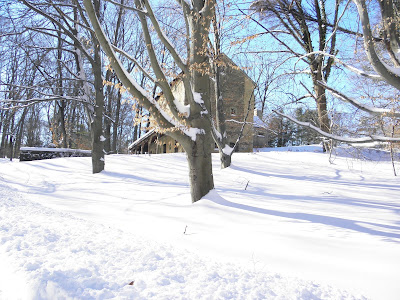 I have to admit that I love being out in the snow when the sun is shining and there is not a cloud in the sky.  I'm not sure I'll be out and about on the field or walking the trails, because there is just too much snow on the ground to make it a safe thing to do. 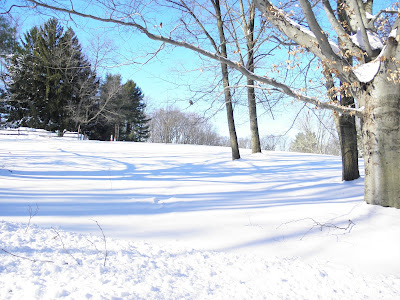 Having said this, I hope all of you who were in the storm's path are safe and warm today, and are digging out of the feet of snow.  Please be careful out there on the roads and do check up on loved ones if you can.