Antiques in Shades of Green

Depression-era kitchen utensils with colored handles in shades of green, were prevalent in American kitchens during the 1930s.  Not only were these instruments meant to be utilitarian in their everyday function, but they were fashioned to harmonize with kitchen tables, cabinets, countertops and tilework of that period.  Many of us collectors like the fact that so many of these kitchen tools blend exceptionally well with jadeite from subsequent decades. 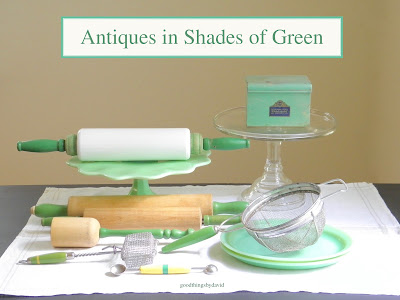 Integrating them into present-day homes is not only a great way to enhance the character of one's kitchen, but it's also a nice way to keep them from becoming obsolete relics of a bygone era. 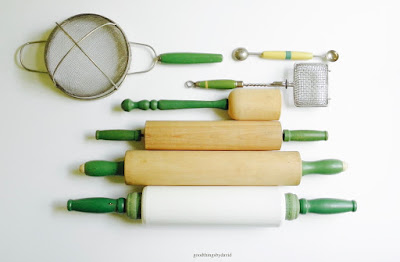 I had the good fortune of coming across several examples of kitchen utensils, glassware and tin from this era, while antiquing in Long Beach, California a few weeks ago.  It happened by pure chance and luck that these items caught my attention, and I couldn't be happier having them in my colonial kitchen here in Pennsylvania. 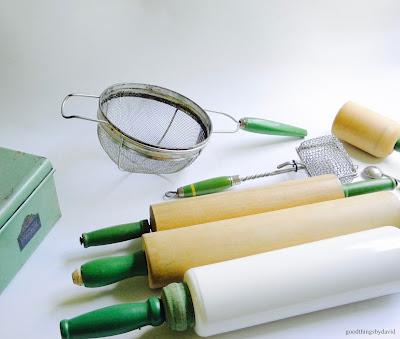 That beautiful metal strainer with its green wooden handle (top, middle) is in such great condition for being almost ninety years old.  It comes with a hooked arm that's soldered onto the rim, which is meant to rest over a mixing bowl. The fact that its mesh is not too fine makes it suitable for straining sugar of hard lumps or for rinsing vegetables under cold water. 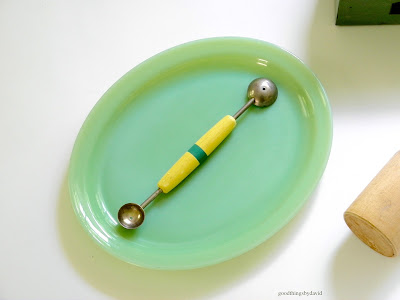 This yellow wooden-handled melon baller has a green stripe across its center. It too is in excellent condition.  Decades later, these haven't changed much in form. 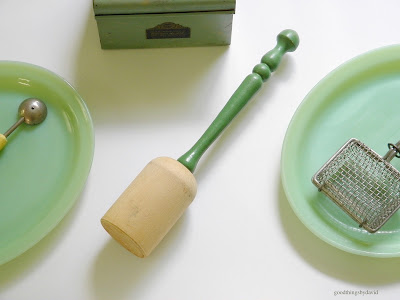 Whether you call this particular utensil a masher, muddler or mallet, I'm surprised that its paint has held up this long.   Its turned handle is gorgeous! 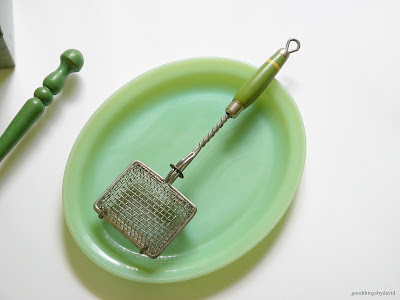 Do you know what this kitchen tool is meant to be?  A friend of mine from Massachusetts knew immediately what it was when I showed it to him. 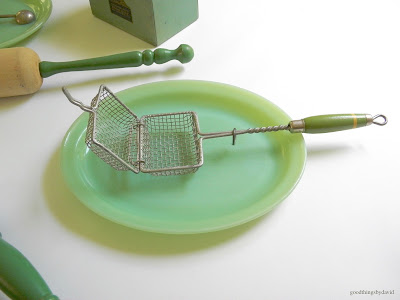 The wire mesh basket with clasp and wire ring to hold it shut, was used as a soap saver way back when.  During the Depression, every last scrap of bar soap was saved up and put into one of these instruments, because one could always immerse it in hot water or run it under the tap for washing up.  A very handy tool indeed.

I love that it is in such great condition, without any rusting whatsoever. 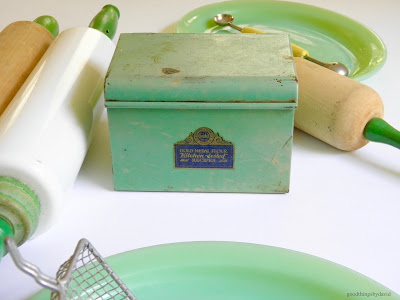 This little metal box was the first thing I purchased while at the Long Beach Antique Market.    A Depression-era recipe box in a beautiful shade of green enamel, with its well-preserved label, was made for the Washburn Crosby Co.'s Gold Medal Flour.  Named after its founders, Cadwallader C. Washburn and John Crosby, the company is now known as General Mills.  My only wish is that the original recipe cards had been kept intact with the box. 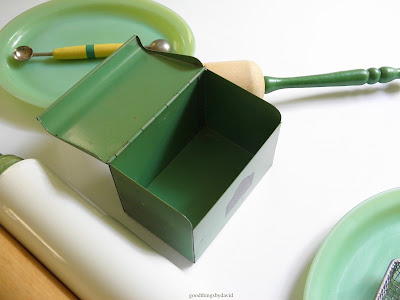 Gold Medal Flour was first produced under that moniker back in 1880, and this 1930s box marketed with its proven & tested recipes would have been used by households across America.  It is still the perfect vessel in which to organize and keep one's recipes.  The outside may have a lot of wear and tear (perfect in my eyes), but the inside is very well preserved.  It is going to look so nice next to my large spice rack or on my countertop. 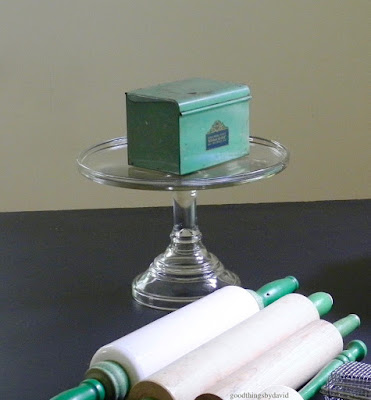 By the way, the vintage clear pressed glass cake stand may or may not be from that era.  I've asked individuals about its origins, but no one seems to know.  It measures 10-1/2" in diameter by 7-1/2" high. 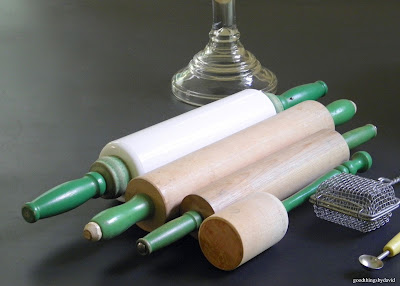 These three rolling pins were difficult to pass up.  My only mistake was carrying them with me on the flight back home, because they were almost confiscated at the airport!  Next time I will ship items like these through the mail.

I'm not exactly sure who manufactured the wooden rolling pins, but the milk glass rolling pin is easier to identify. 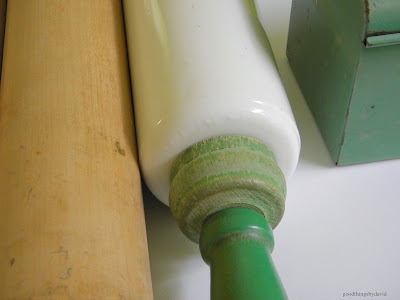 If you look closely, the milk glass rolling pin with its green wooden handles was made by the Imperial Glass Company back in the 30s.  One side of the rolling pin is embossed with, 'Imperial Mfg. Co. Cambridge, Ohio, U.S.A., Patented'. 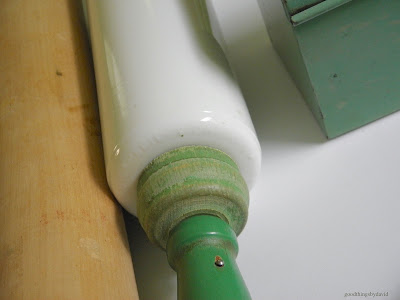 The embossing goes all the way around the side.  The other side of the rolling pin is smooth. 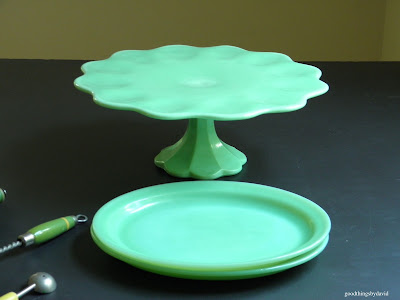 This particular jadeite scalloped cake stand is not antique.  It is a vintage piece of L.E. Smith Glass made for the Martha by Mail catalog.  I've shown this cake stand before on numerous occasions here on the blog, so when I saw one for sale at the Long Beach Antique Mall II, I wasted no time in acquiring a second one for my kitchen. It is ideal for serving large cakes, but it is also great to use for presenting cookies on a dessert table. 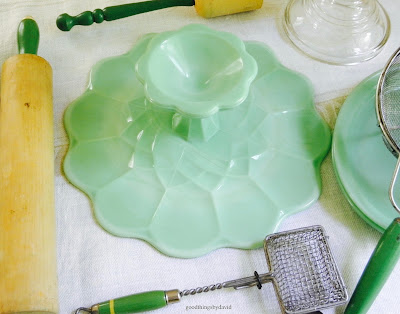 As you can see, the underside of this pedestal cake stand is remarkably intricate and beautiful. 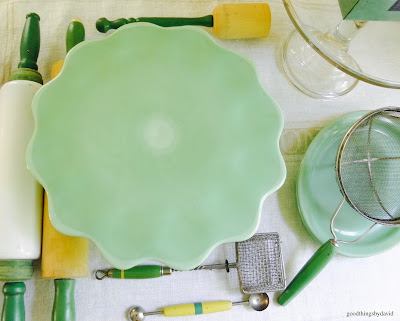 The outer edges of the scallops on the cake stand have a pronounced difference in color from the rest of the body.  It's something one sees more often in slag glass. 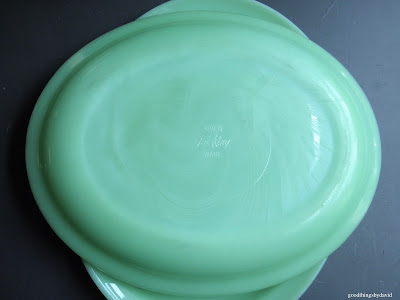 These Fire King jadeite platters are sometimes known as 'football' platters. They were made in two sizes by Fire King.  The two platters that I purchased measure approximately 9-3/4" long by 7-1/2" wide.  It think these are ideal to use as dinner plates! 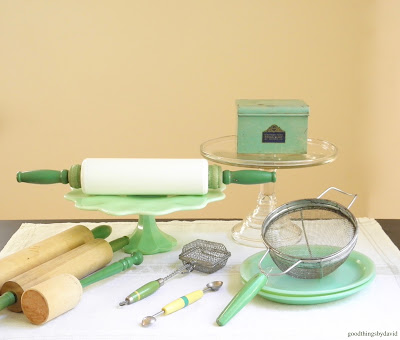 Everyone can use a little green in their lives, and if you happen to like collecting green-colored vintage items and antiques, keep your eyes opened for Depression-era kitchen utensils like these.  They can be found at most antique stores, flea markets and online.  They're not terribly expensive (with the exception of the Imperial Glass rolling pin).

Spruce up your kitchen with items from a bygone era and display them or use them as they were meant to be.  You may even end up starting a new collection.
Email Post
Labels: Antiques Collecting Los Angeles Martha by Mail Shopping