Life seems so much better with farm fresh eggs, don't you think?  The day I arrived back from my trip to California, I had a text message from my friend and neighbor, Luke, saying that he had a little surprise for me.  The airplane was literally taxiing down the runway when I got his message.  I told him to stop by the house later that afternoon after I had settled back home and unpacked. 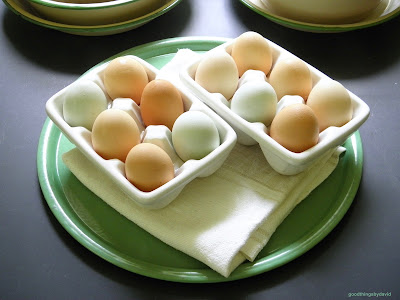 When he arrived I noticed that he had a small bounty of vegetables from his garden in one hand, and an egg carton in the other.  He said that they were small gifts from his home that he hoped I would enjoy.  I was really touched at such a thoughtful gift. 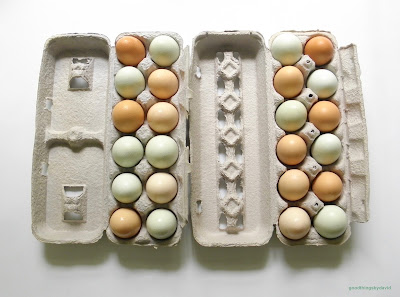 I knew that Luke was a kindred spirit the moment I opened the egg carton. The multi-colored, farm fresh eggs from his chickens were absolutely beautiful and simply perfect.  I began asking him about his animal husbandry, and came to find out that his flock of chickens were just getting started.  I also asked if his starter chicks had come from Murray McMurray Hatchery.  As soon as I said that, Luke's eyes narrowed and he asked, "how did you know?".  I responded with, "Martha Stewart".  We had quite a chuckle at this because he said that he had no idea she ordered her chickens from them.  Small world!

His "Easter Eggers" from Murray McMurray include Bantams, Araucanas (hence the green-colored eggs), Ameraucanas, Faverolles, and several others. I'm so happy that I now have a weekly standing order of freshly-laid eggs from Luke.  My baking and my cooking is going to be that much better because of these eggs.  I can't thank my friend enough for his generosity and for his animal husbandry endeavors! 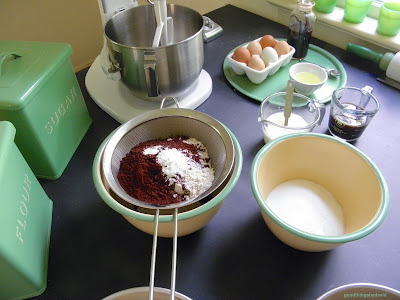 I wasted no time in utilizing several eggs for a chocolate cake straight out of Martha Stewart's 'Cake' book. 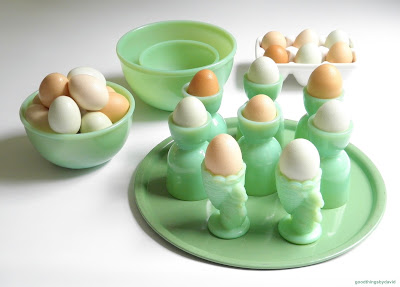 As much as I like the convenience of organic, cage-free eggs from the supermarket, nothing beats getting eggs straight from the source or from a farmers market.  I try my best to get the best of the best for my cooking and baking, so it's good to know that my eggs will now come from my neighbor's chickens.  Not to worry readers, I've already asked Luke if I could visit his chickens and blog about them in the near future.  Stay tuned for that in the coming weeks!
Email Post
Labels: Baking Chicken Eggs Home and Garden Martha Stewart