A Collection of Antique and Vintage Tea Towels

Vintage kitchen towels or tea towels have such special appeal to those of us who collect a variety of household textiles.  The term "tea towel" is what we often associate with the variety of toweling that was spun from linen and used in kitchens throughout the decades for drying delicate items such as glass and china. 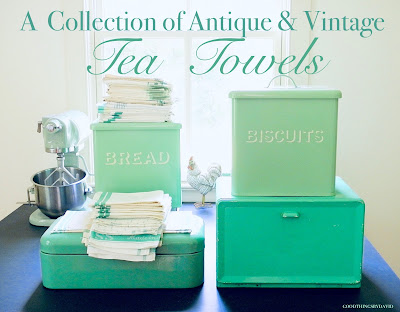 Tea towels or kitchen towels made from either 100% linen or a cotton-linen blend are easily recognizable by touch and by their look.  These are not the type of super-absorbent cotton towels (think bar mops and other terry-cloth towels) used in today's kitchens to wipe up spills and clean the counters.

If you're lucky enough to find new-old stock with the sizing still intact, you will see how wonderfully attractive they were presented to the consumer with their bright colors, crisp texture and natural weaving.  Even better is when you find towels with their original tags.

Pricing varies from under $10 to over $30 for one towel, depending on the rarity, color combination or country of origin.  Do your research before purchasing and then go from there.  If you find sets of 2 or more, don't hesitate to get those because it's always nice to have multiples.  Think outside the box and use your vintage towels for picnics or informal dining at home.  Lapkins are always a good thing in summer. 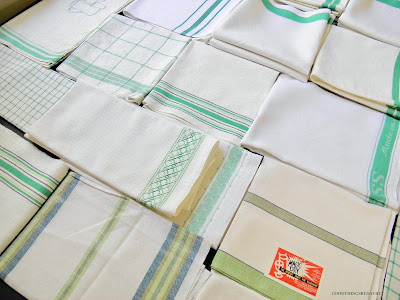 The process of taking flax and cotton fibers, and turning them into yarn is one that has been practiced for millennia.  The fibers of the flax plant (Linum usitatissimum) can be found in the stalks, and if it is hand harvested as opposed to machine harvested, it provides the softest linen possible.  Cotton comes from the plant Gossypium.  Its soft fibers are encased in a boll. Harvested linen and cotton fibers must first go through a cleaning process to get rid of impurities.  Once this is done, the fibers then get carded and spun into threads.  The threads themselves get woven by mechanical or hand-operated looms, which turn them into fabric.  If the threads have been dyed, the weaving process is where patterns get made.  These patterns can be as simple as a stripe or as intricate as one's imagination.

American textile mills that were producing a multitude of household linens during the early to mid twentieth century include: Startex Mill (defunct) of South Carolina, Martex, Cannon (defunct) of North Carolina, and J.P. Stevens & Co. of South Carolina.  Those tend to be my favorite American made linens to collect for my kitchen, but not all of my pieces are American.  Great examples in my collection come from France (among my favorite ones), where they are known as 'torchons'.  It's a bit difficult to find French torchons that don't include some red in them, but green single, double or multiple-striped examples are out there.  They may be a bit pricier than red torchons, but they're worth it to me

Poland, Hungary, the Soviet Union, Ireland and the United Kingdom are other countries that have beautiful examples of vintage tea towels.  For me it is not so much the country of origin that's important, as it is the quality of the color, the sturdiness of the fabric and the uniqueness of the design. 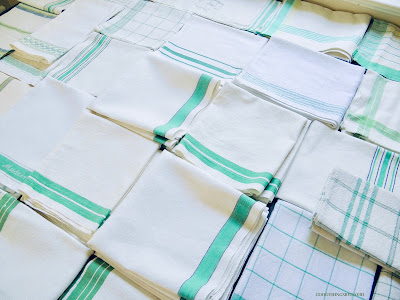 Whether one's tastes are based on color or design, finding vintage tea towels through various sources can be a lot of fun.  Online stores, auction sites, consignment shops, antique shops and flea markets, are just some of the places where I've found the majority of my old textile treasures.

I've also been fortunate enough to find sellers who have had bolts of linen from the old Startex or Martex mills that were never turned into anything. This is when I feel like I've hit the motherlode, because it is then that I get to create a multitude of kitchen towels or lapkins.  It isn't often to find a set of 4 or more of the same design.  In fact, it is a rarity to come across that.  So if you are ever lucky to find yardage of old fabric, and it is in good condition, buy it and create your own tea towels. 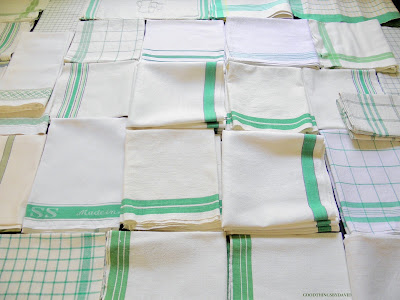 I honestly don't remember why I started collecting tea towels, but it probably had something to do with the color green.  There must have been a kitchen towel that caught my attention because of its simplicity, and I had to have it.  Only then did I realize the possibility of adding more and officially starting a new collection of kitchenalia for my home.  My one caveat to myself: they had to be green.

The tea towels in my kitchen seem to have morphed into a burgeoning collection that I am very fond of. 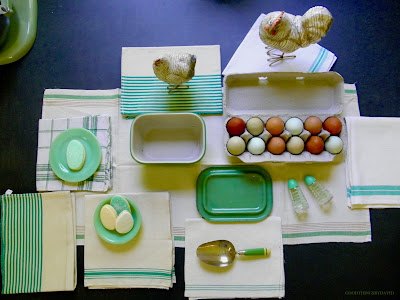 A large part of the appeal of vintage tea towels, at least for me, is that they look inherently good paired with other kitchenalia from yesteryear.  Think of how great they look with Fiestaware, Fire King jadeite, Bauerware, Buffalo China, French cafe au lait bowls, yellowware, old enamelware and graniteware, and with mid century bakelite. 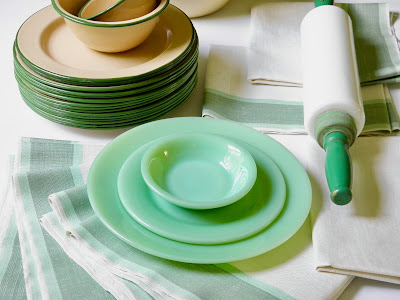 Some Fire King restaurant ware next to a stack of cream green enamelware from the 1930s and 1940s, look so good next to those tea towels that I had made from some yardage. 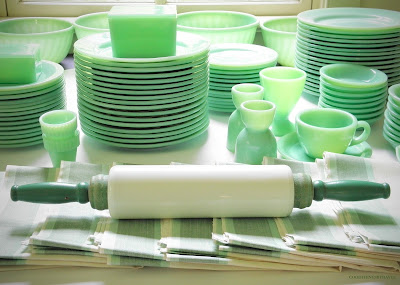 The soft hues of the green stripes on the tea towels are picked up by the wooden handles of the milk glass rolling pin and my collection of Fire King. 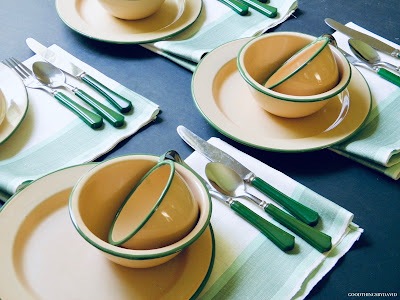 You can see how well tea towels look next to old enamelware.  One can take a stack of these linens on camping trips, out to a picnic or for casual dining on the back porch and not have to worry about wasting paper towels. 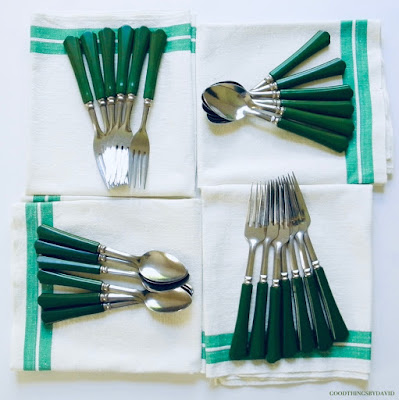 Bakelite and vintage kitchen towels?  Natural beauties.  It doesn't matter the color or style, they were meant for one another. 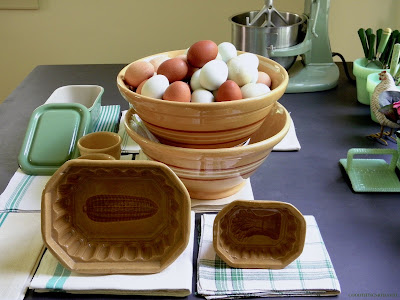 After a weekend of antiquing with friends a few weeks ago, I knew that the tea towels I picked up at a booth would be excellent paired with the yellowware molds and bowls. 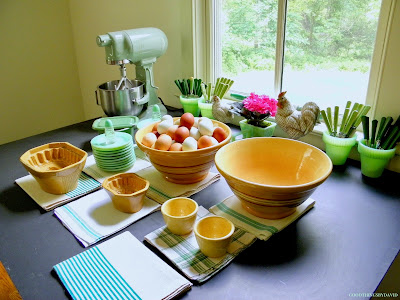 I don't know about you, but I always reach for a kitchen towel to put underneath a piece of heavy earthenware or glassware when I set it on top of a hard surface, such as my soapstone.  The last thing I want is to have any mishaps with my treasured pieces. 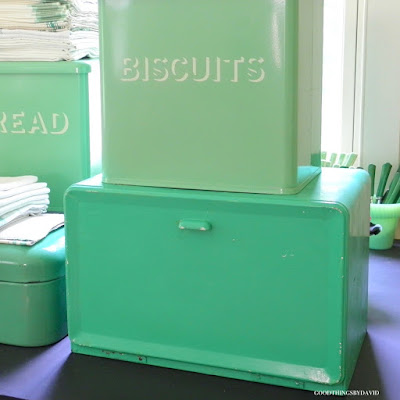 Storing my linens became somewhat of a challenge when I found myself with a stack of them that couldn't fit in my kitchen drawers.  I turned to a set of collectible bread boxes that I've gathered from the United Kingdom, Germany and the United States.  These indispensable storage boxes were repurposed! 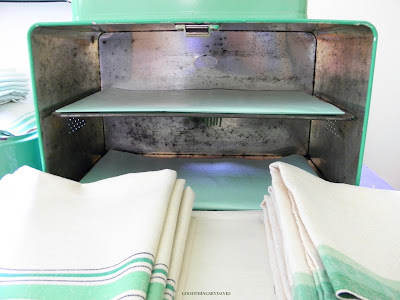 This American bread box was from a tag sale.  Its wonderful green was what attracted me to it in the first place, and upon opening it, I noticed a removable shelf.  To my mind it was perfect.

For the purpose of storing my tea towels, I lined each shelf with a piece of tissue paper. 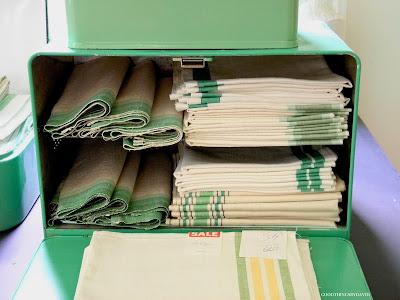 I like to use this particular box to hold my sets of 4 or more.  Two of these sets were custom made for me by a local seamstress (a few of my friends were gifted pieces from these sets), and others were pure luck.

If you must know, I always launder the antique and vintage kitchen towels that come into my home, and I iron each one until they are crisp and beautiful.  Only then do they get folded and stacked for storage. 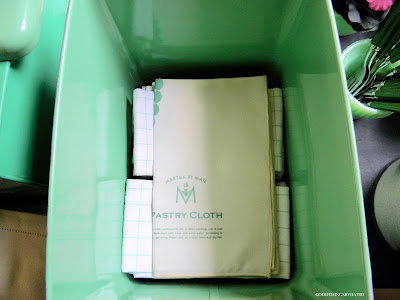 The large Bread and Biscuit storage boxes were made exclusively for Martha by Mail by Brettel and Shaw in the United Kingdom.  Unfortunately that manufacturer is no longer in business.

This particular storage box was lined with a set of twelve MSE kitchen towels (not really vintage), and a Martha by Mail pastry cloth. 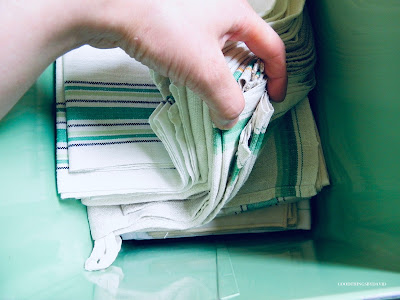 On top of them, I added the tea towel patterns of which I have pairs. 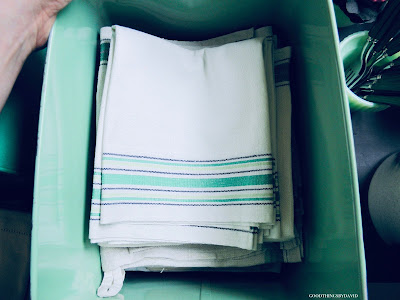 Done!  This box is ready to be closed. 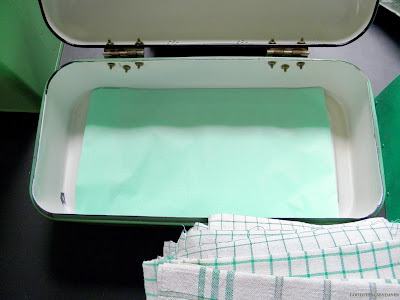 My German bread box from the 1940s is great for the pieces of fine-lined checkered patterns.  These were ironed and folded so that they fit the length of the box. 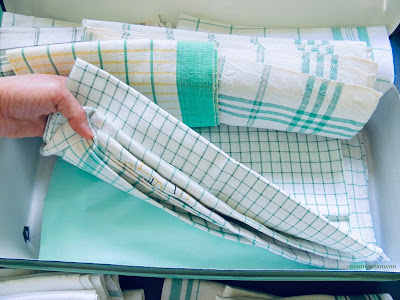 I have pairs of some pieces, but most are single examples. 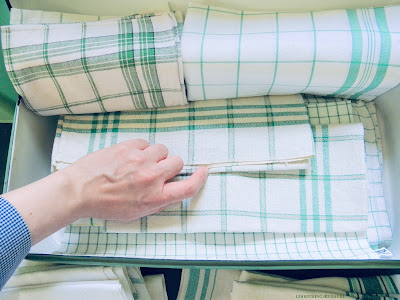 Don't you just love the patterns?  One can never tire of collecting this type of tea towel, especially if it's green. 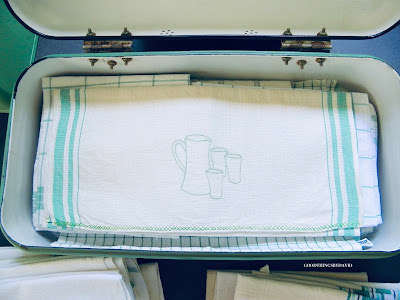 OK, so this piece doesn't fit the pattern, but I love the embroidered pitcher and glasses on this tea towel.  I wonder who made it.  Was it a farmer's wife in the midwest who spent an afternoon embroidering or was it a beginner testing their skills?  I'll never know. 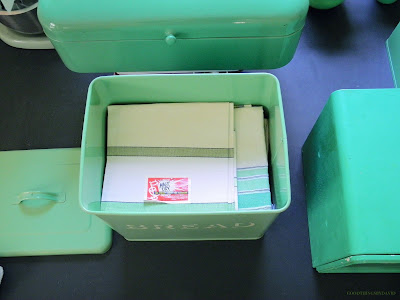 The other storage box was stacked with pieces of which I have only a single example.  I think of these as true treasures because some of them have never, ever been used.  Labels, tags and such, have been left intact.  There are some in here that I wish I had multiples of, but alas, it will never be. 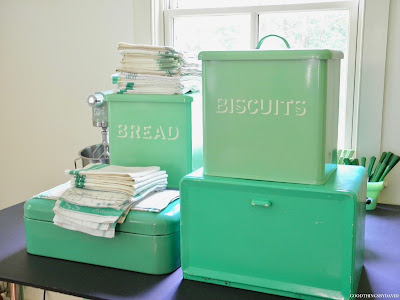 Antique and vintage tea towels tell a story.  They tell a story about a bygone era and the people that inhabited those certain parts of the world where such wonderful textiles were being made.  Simplicity, efficiency and frugality were key to most housewives during the early part of the twentieth century, right up until the end of World War II.  Kitchen items had to be well made, affordable and long lasting.  That many tea towels can be found from this era in history is a testament to their heavy duty properties.

I hope this post has piqued your interest in vintage and antique tea towels. Whether you have an existing collection of kitchen towels or are thinking of starting one, think about what makes you happy.  What colors do you like most and what looks good with the items in your kitchen?  Do you like embroidered toweling, striped or plain checkered patterns?  Maybe you like certain color combinations or tea towels from a specific country or manufacturer.  Whatever the case may be, do searches online and visit local consignment shops, antique malls, flea markets and general stores that sell vintage items.

If you're like me, you will never tire of collecting the antique and vintage.  Tea towels from the past are a very good thing in my opinion.
Email Post
Labels: Antiques Collecting Design Homekeeping Kitchen Linens Vintage