Wirework cooling racks from the mid-19th century through the early 20th century have gained in popularity in recent years due to their singular look, fine craftsmanship and visual appeal.  What's more, these pieces have also appreciated in value over the past several decades due to their scarcity.  Collectors will get into bidding wars if and when they come up for auction, often driving prices into the hundreds of dollars for a single piece.

More recently, the drama series Downton Abbey, featured them periodically in the kitchen scenes (everything in the kitchen of the Downton was of the period), which fueled interest for existing collectors.  Many decades before Downton, however, we had lifestyle maven Martha Stewart, using them in several of her cookbooks and throughout her very popular television shows.  Collectors quickly took note! 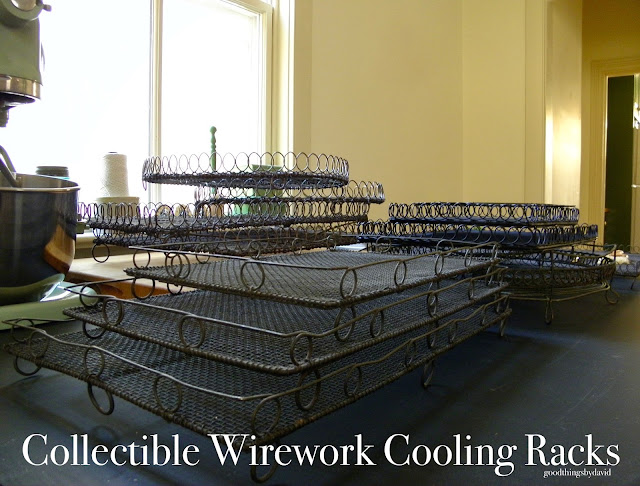 Wirework and wire objects can be traced as far back as the 17th century to the region of Slovakia, where tinkers specialized in weaving laminated iron around broken pottery.  These tinkers would travel from town to town with spools of thin wire, mending broken bowls, plates, jugs and other ceramics that would otherwise have been costly for farmers to replace.
Centuries later, these tinkers would elevate the fine craft of weaving wire into an art form for the home.  Antique catalogs of kitchenwares from the Victorian era showcase the large array of functional pieces that would have been used by  cooks of the grandest homes, by the proprietors of bakeries throughout Europe, and even the housewives of middle-class homes.  Objects such as salad baskets, wine bottle holders, carry-alls, birdcages, grills, cooling racks, soap holders, frying baskets, tiered egg holders, trivets, picture frames, whisks, wine bottle openers, all became popularized in the 19th century by the French.  As tinkers traveled throughout Europe, so too did their craft.  It is the French, however, who produced some of the best pieces that survive to this day.
Much of this wirework fell out of favor in the early part of the twentieth century as manufacturers started producing sturdier, more rust proof enamelware, glassware, and stainless steel.
Mrs. Beryl Patmore is seen here carefully moving some cooled off tartlets onto a serving platter for service (probably mini mincemeat pies).  This is one of those wonderful cooling racks that are rectangular in shape (at a glance I would say it's a 10"x15" piece) with that lovely looped border.
Patmore and her assistant, Daisy Mason, are making an array of pastries here.  Perfectly shaped eclairs resting on those cooling racks are being prepped by Mason.
Throughout her many television shows, including Martha Bakes (above), Martha Stewart has always loved using her antique wirework cooling racks.  Those nut & fruit biscotti look scrumptious sitting on that rack.
Please take note that several celebrity designers have produced their own versions of the antiques.  Among the most popular are those from the Martha by Mail catalog (these are highly collectible and almost as expensive as the Victorian era ones) and those made by Australian celebrity, Donna Hay (these are reasonably priced).  Although the newer pieces are well constructed and a pleasure to use, they are usually heavier and are constructed from a thicker gauge of wire than their antique predecessors.  There is no mistaking the newer pieces from the old ones. 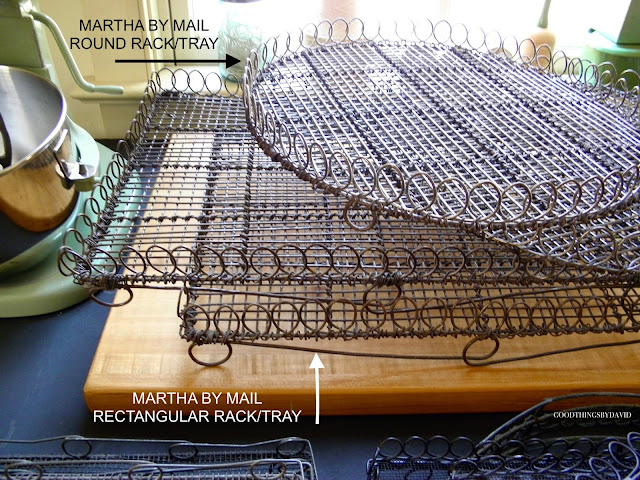 The cooling racks or cooling trays developed exclusively for the Martha by Mail catalog are very substantial pieces.  There is a large round with looped border and a rectangular piece with looped border.  They are well constructed pieces created using the old method of weaving and twisting wire.  If you ever happen to come across one or if you already own them, you will see upon close inspection that there is no soldering whatsoever on these racks.  Everything is held together by woven wire.  These are extremely collectible and highly sought after by collectors.
Donna Hay's wire cooling racks are a pleasure to use in a busy kitchen because they are sturdy.  The fine mesh pieces with looped borders can be used as serving pieces for any number of baked goods or for displaying a collection.  I do love using mine. Hers aren’t as heavy as the Martha by Mail ones, but they are made to last.
These French "tablettes à galerie" were made in three different sizes.  All of them have looped borders made from a single piece of wire.  What distinguishes the largest of the pieces is a reinforced wire support that runs down the middle of the piece.  If you look closely you will notice the finely woven wire grid where baked goods were meant to rest.
You can see where I've demarcated the large rack on the underside.  This was added to give support to a rack filled with pastries or other baked goods.  One can just imagine what something like this must have looked like in Paris during the 1800s.  A cafe would have displayed their pastries on them for customers.
Pieces can be found in near perfect condition, but do expect some wear on most of them.  Since they are prone to rust, a bit here and there shouldn't hurt the rack's appeal or collectibility.  Breaks in the wire are sometimes found, as are bent and warped borders.  Whether these things are important to you, don't expect to be given a discount if the piece you find is less than perfect. 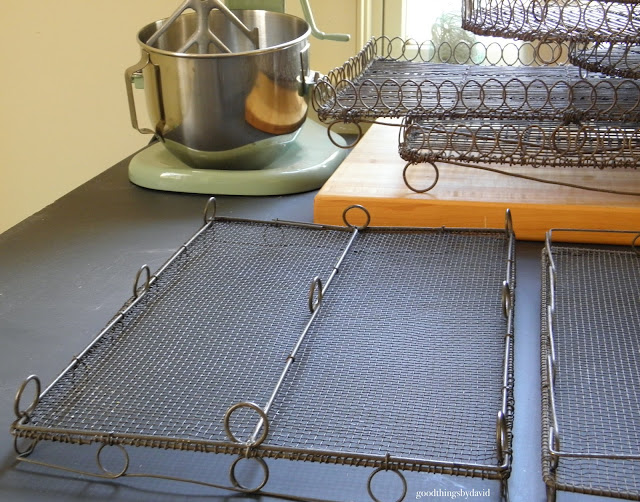 If you look closely, you will see that the looped foot in the middle is facing in the same direction as the feet which run along the length of the rack, not the width. 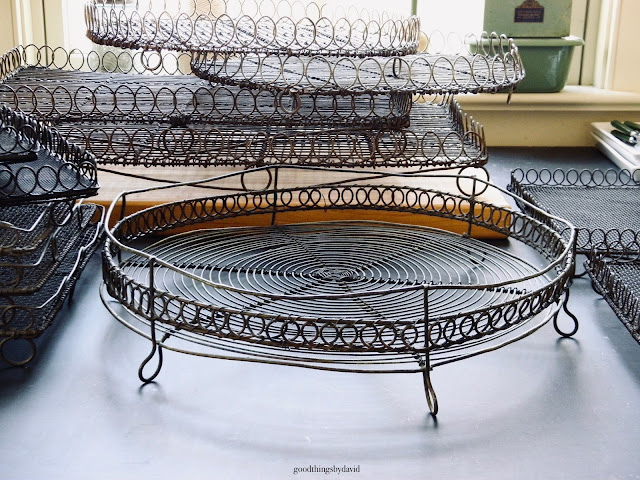 This unusual round cooling rack is a rare find.  I have yet to see a similar piece out in the wild, so I am fortunate to even have it.  It is large, heavy and well constructed. 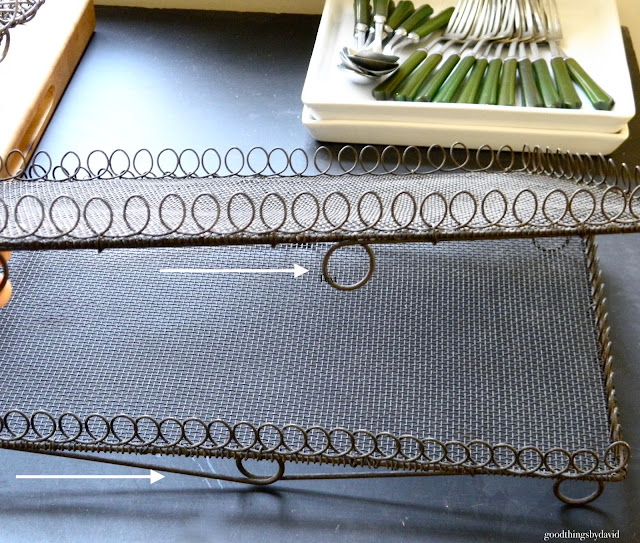 These two particular racks are the more common forms that come up several times a year at auctions.  I believe them to be from England, since so many found in the United States seem to come from there.  These are the racks used in Downton Abbey and the ones that Martha likes to use in her homes and in the studio. All have fine mesh bottoms and looped borders.  Where you see a difference is in the looped feet that span the length of the tray.  One version has a full length of wire which forms the loops (bottom version) and another simply has looped feet.
As much as I advocate using these pieces in your home, please keep in mind that they are antiques and should be treated with care.  I never wash them with soap and water, and they never, ever go in the dishwasher.  If I'm going to serve something on them, I lay a vintage tea towel or I cut a length of parchment paper that can lay on top of the wire mesh.
My friend Stephane has one of the largest collections of wirework that I've ever seen.  Hers are displayed in a family room, hung on a wall over a mantle.  They are amazing and inspiring to say the least.
Whether you choose to display them like Stephane does or keep them on a counter or shelf to use at a moment’s notice, it's a good idea to periodically dust them.  I don't like feather dusters or lambswool dusters for this because they are prone to snagging against any exposed wire.  I prefer to use a clean paint brush and/or pastry brush to remove any dust.  I do it often so that nothing accumulates. 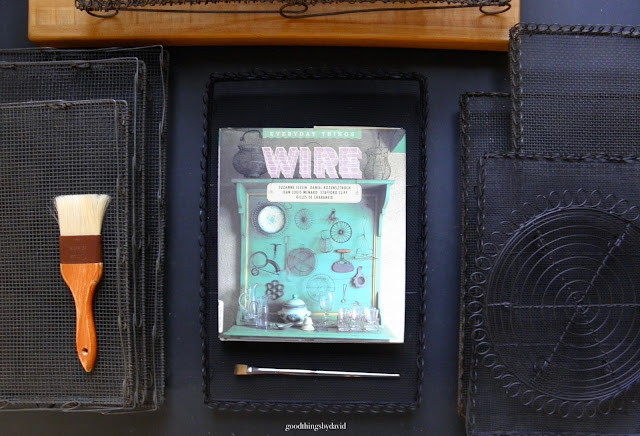 For further reading, I urge you to get this book called, Everyday Things Wire.  It's a great book that provides you with valuable information. 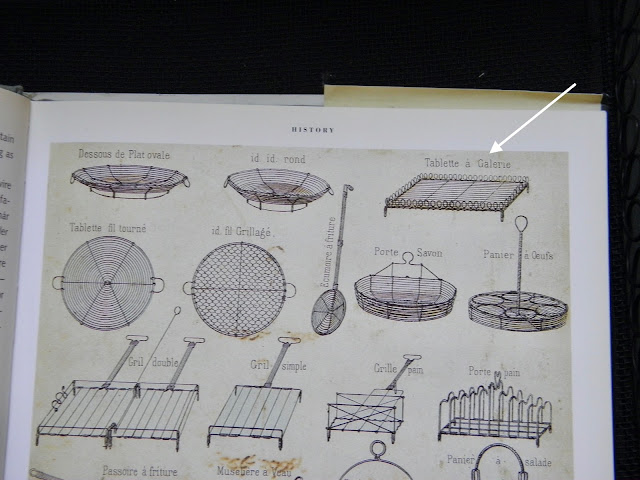 This image from the book shows you what a catalog of wirework kitchenwares looked like in the 1800s. 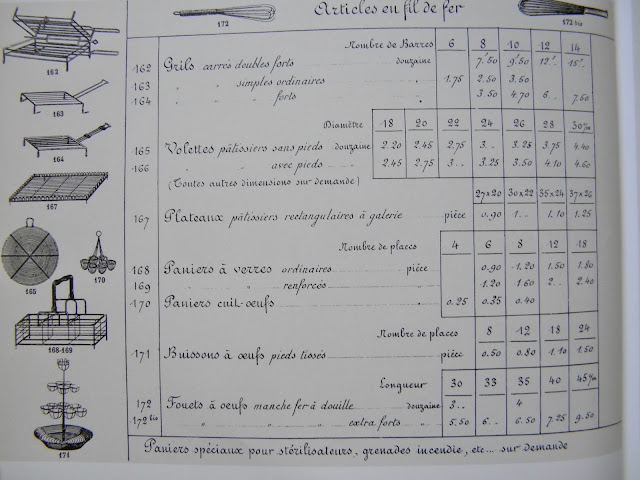 The French thought of everything when it came to wirework.  C'est magnifique! 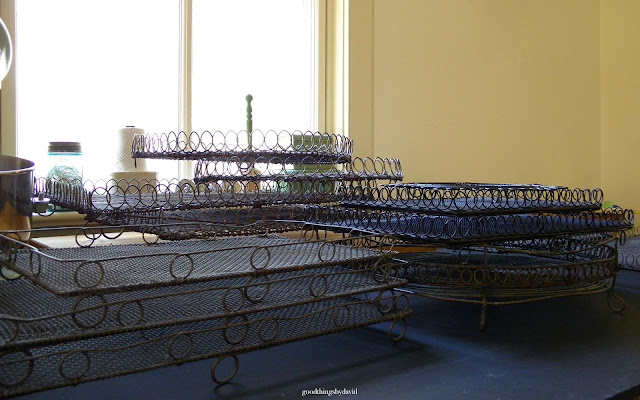 Wirework cooling racks from the Victorian era and from the early part of the twentieth century may not be everyone's cup of tea, but if you're a baker, collector or blogger, having a rack or two like this will add old world charm to anything coming out of your kitchen.  Keep an eye out for them online and at antique stores throughout the United States, England, France and Australia.  I've purchased pieces from all of these countries and I can tell you that I am all the more happy to own them.
Cheers!
Email Post