Bank barns made of stone date back to early Colonial times in the United States.  Abundant and inexpensive land made it easy for early settlers to erect barns that were both functional and practical.  Stone barns in Pennsylvania are quite unique and truly beautiful.  It was the German settlers in the area that began building bank barns and the fact that many stand to this day, is a testament to their well thought out plan & design.  A bank barn is unique in its approach to the landscape.  Essentially, it is a rectangular structure that is built into a hill or bank.  This ingenious style of architecture gives access to both the ground floor and second floor.  Take a look at the stone barn that dates back to the 1830s here on the grounds of where we live.  It truly is a bit of Americana at its best.  Enjoy! 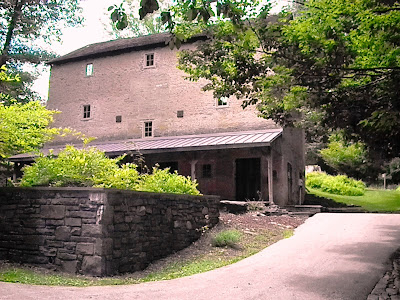 This is the facade of the stone barn with a porch addition and a large patio.  You can see how the driveway to the barn banks upward as you approach the hill.  The barn has three levels. 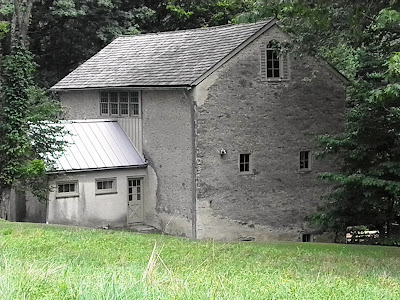 This view is from the edge of the meadow.  It shows the annex to the left and the gentle slope of the hill where the barn rests. 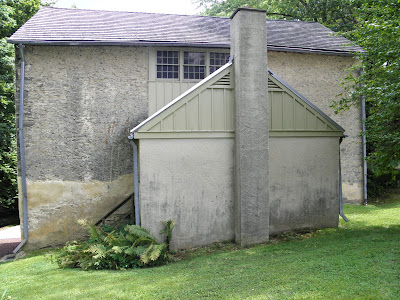 The rear of the barn clearly shows how the structure would have been used in the early part of the 19th century.  Without the annex, there would have been a large door giving access to the second & third floor.  The ground floor has always been accessible from the front and sides. 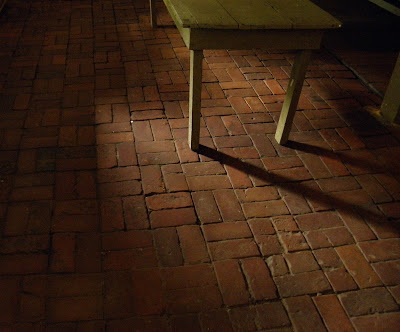 This gives you a glimpse of the brick flooring found on the ground level.  Originally it would have been plain dirt mixed with hay.  The ground level was meant to keep livestock such as horses, ox or cattle.  Temperature insulation would have been one of the advantages of building along a bank.  The earth along the back wall would have kept all of the animals cool during the summer and warm during the winter.  The stall doors with a southern exposure were also a bonus. 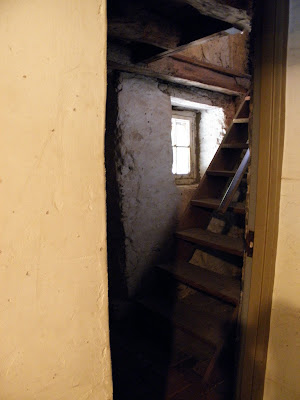 There are two sets of stairs (all original) that lead to the upper floors.  This is one of them. 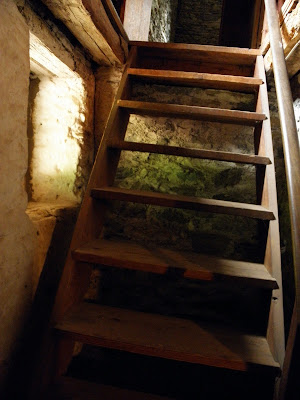 Plainly built of pine, the stairs have withstood the test of time.  You can see that the barn walls are about a foot thick. 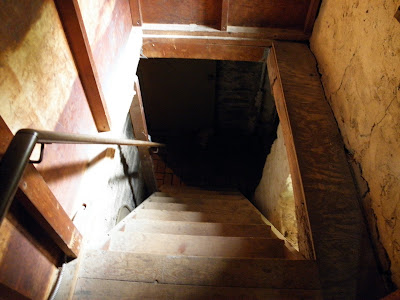 I've just climbed those steps and am looking down.  They are pretty steep, but easily accessible. 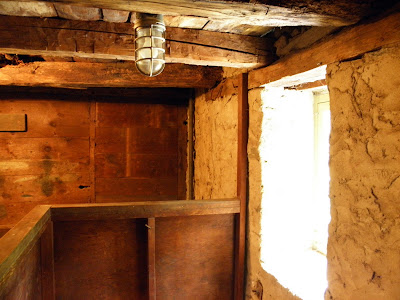 Now I'm standing at the landing looking at the simple wooden banister, next to a central window.  The original beams have simple & utilitarian light fixtures. 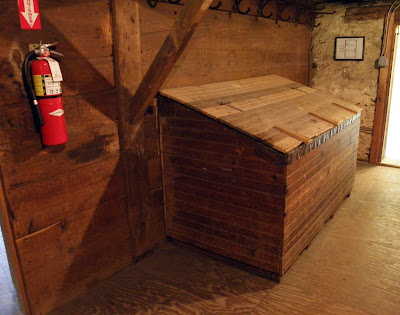 The center "hall" has storage chests & cast iron hooks for barn equipment.  These are all original to the barn.  Large wagons would have entered this floor to unload the day's harvest and drop the necessary hay to the livestock on the ground floor. 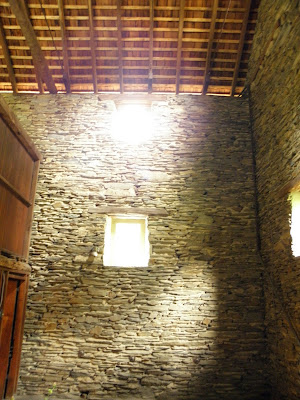 The western & eastern sections of the second floor are opened all the way to the top of the vaulted ceiling.  This window shot shows the second & third floor windows of the facade.  I'm standing in the western bay. 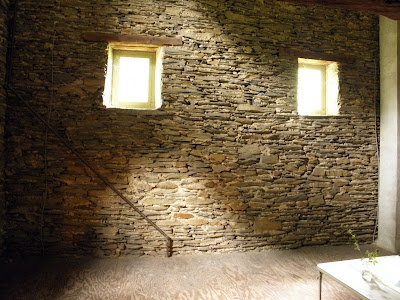 Still standing in the same room (the western bay) you can see how well each stone is laid out. 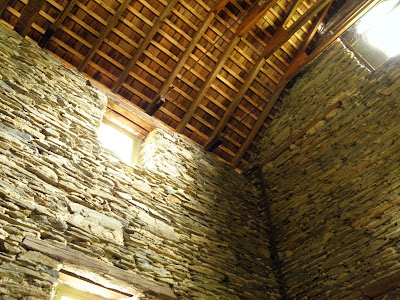 Looking up, one can see the different architectural components that hold the ceiling in place. 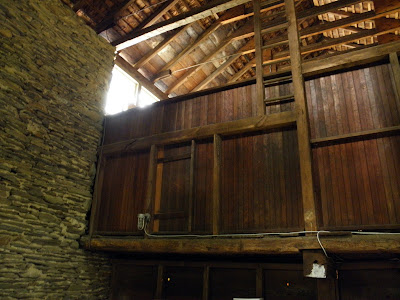 This is the eastern bay.  The second floor of the barn would have been used to store grain and hay.  Easily accessible from the rear of the barn, the farm's owners would have used this space more than any other. 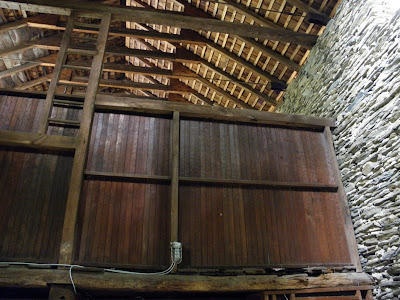 The wooden walls & ladders of the third floor. 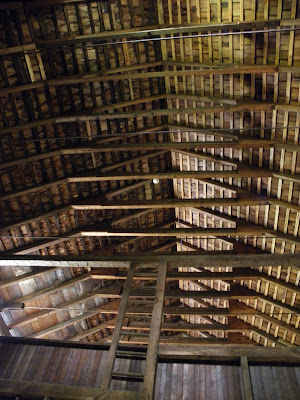 The vaulted ceiling shows thick wooden trusses connected to rafters which provide the necessary support to the entire span of the roof. 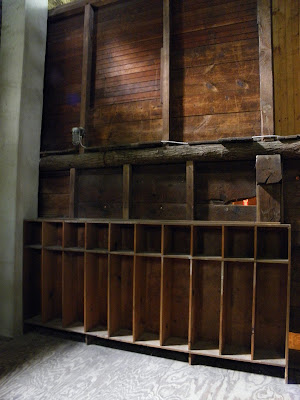 This area was particularly useful for barn equipment storage.  It's a well constructed shelf in the eastern bay. 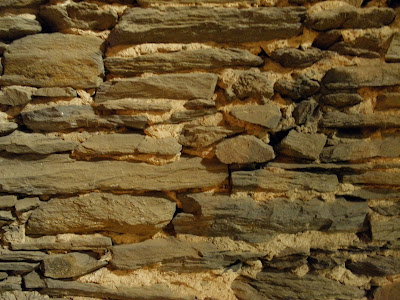 A closeup of the actual wall.  Stone quarried from the property was the approach to barn construction.  All of the joining compound (much of it mixed with horse hair) is still intact. 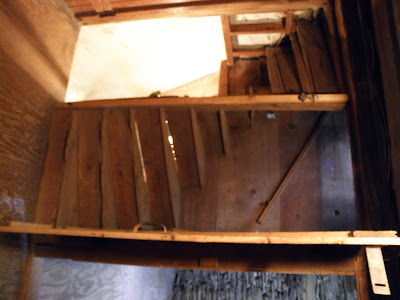 This is the winder stairwell which leads to the third floor.  The well worn treads are a bit treacherous to climb & must be done with great care. 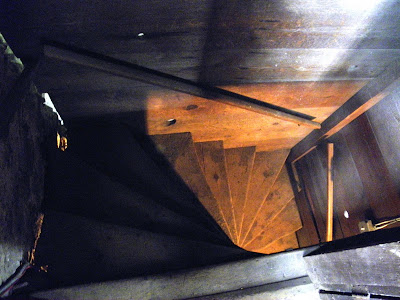 I'm standing on the 3rd floor landing looking down the stairwell.  It is a very tight area.  Winders in colonial homes are generally found in the rear of the house; they not only give access to the top floor, they also take up a minimum of space. 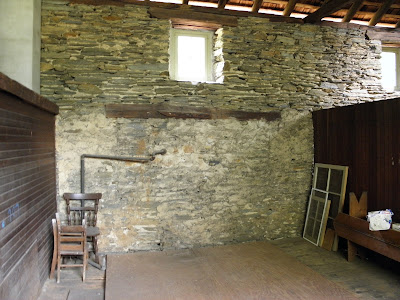 The small area of the 3rd floor currently holds some loose odds & ends.  The wooden beam embedded in the wall originally held a door in place.  Used mainly to drop hay, grain or equipment, it was later sectioned off with stone when it was no longer needed.

Although bank barns aren't exclusive to the United States (many can be found in England, France, Italy & Norway), it was certainly the most popular style of barn in Pennsylvania during colonial times.  If you ever find yourself in Pennsylvania and have the opportunity to visit a stone barn, take the time to walk through it and admire the ingenuity with which our forefathers planned and constructed these marvelous buildings.  I hope you learned a thing or two and enjoyed this little tour through time with me.  Cheers!
Email Post