I first became enchanted by mercury glass while antiquing in my former hometown 14 years ago.  The antiques dealer whose store I used to frequent had a mantle inside the converted home lined with beautiful mercury glass candlesticks.  Their lovely shapes were something to behold whenever one would walk into that store, but it was the way in which they gleamed so proudly that really caught my attention while perusing the countless antiques. Not knowing what these pieces were, I began to ask questions.  I'm glad I did, because Lydia Gorohoff, quickly became my go-to source for wonderful collectibles as I began creating my home in Haddonfield. 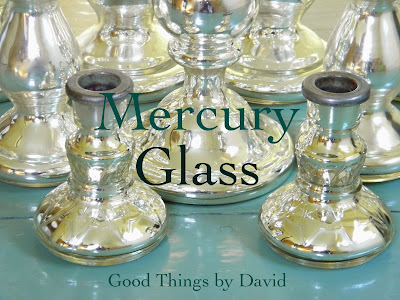 Born and raised in Germany, this astute antique dealer accumulated a lot while living in Europe.  She and her husband brought many of their prized possessions when they emigrated to the United States  and, lucky for me, among those pieces were her mercury glass candlesticks from Czechoslovakia.

From around 1840 through the early 1930s, mercury glass (also known as silver glass) was produced in the Czech Republic (then known as Bohemia) in great quantities; it was also produced in England and for a brief period, in the United States.  This freehand blown glass was distinguished by its double-walled design, in which the inner wall was colored with silver nitrate, and the pontil mark on the base of each piece was either covered with a plain cork & wax or a lead piece covered with glass.  This plug was meant to keep air out of the inner wall.  If the pieces, however, were mold blown, then they had no pontil scar.  My photos, below, illustrate what I mean. 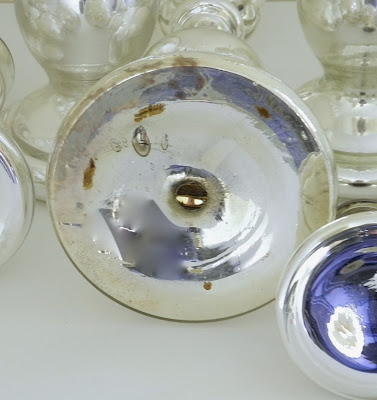 The plug of the pontil mark has
since fallen into this piece and I can hear it
rattling when I shake the candlestick.  This piece
was blown freehand. 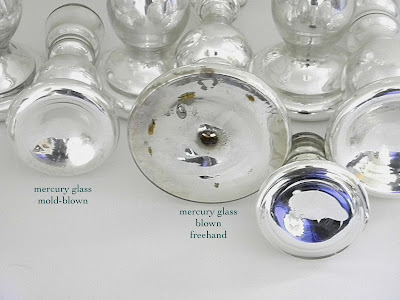 While thinking about this post I had to go back and look at the mercury glass I had purchased many years ago.  All of it was in storage and much to my chagrin, I hadn't laid eyes on it in over 6 years.  I think I must have gasped when I opened the containers which had my candlesticks, because I once again realized that I had made some wise purchases.

One of my readers shared some photographs of his prized pieces from Martha by Mail, which were produced for a very short period of time.  I think you will agree that they are stunning pieces of glass.


Begin your collection of mercury glass. 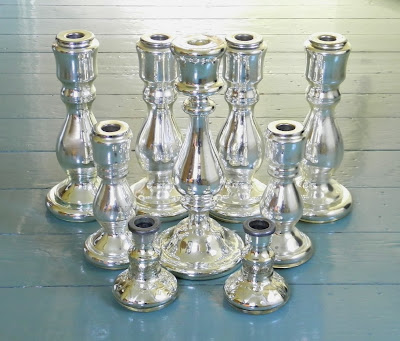 These are my candlesticks ranging in size from a mere 4 inches to 12 inches. 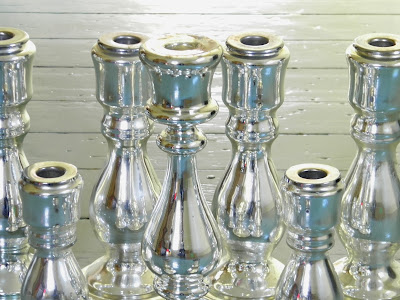 Although they aren't that large, they are rather hefty for their size. 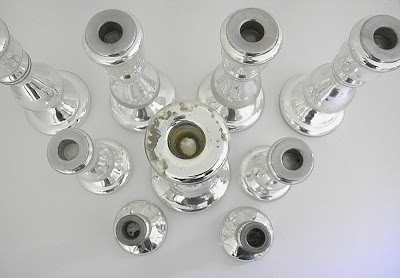 This photograph shows you what they look like from above.  The larger one is already deteriorating around the rim.  Luckily, the others are almost perfect pieces. 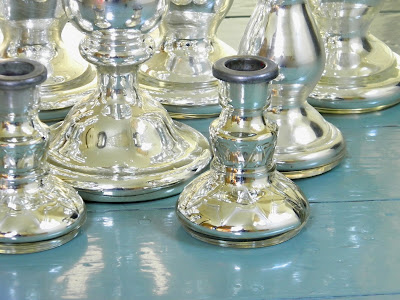 The pair of 4" candlesticks with pewter tops have a raised design on them that is quite nice.  They're small enough to use on one's table. 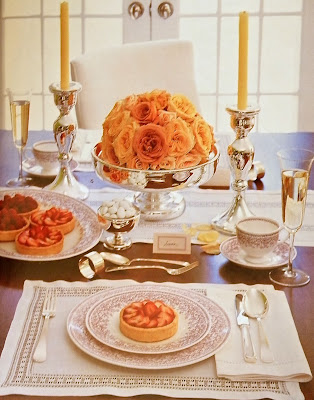 At one point it was possible to order candlesticks, footed bowls, compotes, plates and even vases from Martha by Mail.  The table setting above is from the former catalog.  On the table there is Wedgwood Winterberries bone china, German silverware, tulip champagne glasses and of course, mercury glass.  The large rose bowl makes a dramatic statement, while the candlesticks and smaller footed bowls provide a quiet elegance. 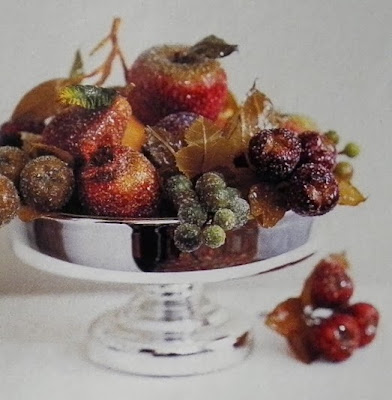 Here is another image of that large footed bowl filled with faux sugared fruit. 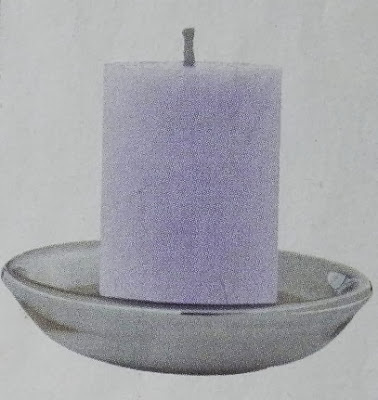 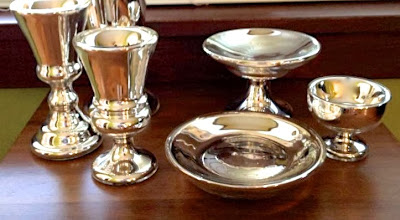 Reader, Kevin Link, has a few of these pieces from the catalog.  He says that they are among his most prized possessions.  When they're not on display at an elegant table, Kevin uses them for decorating his home. 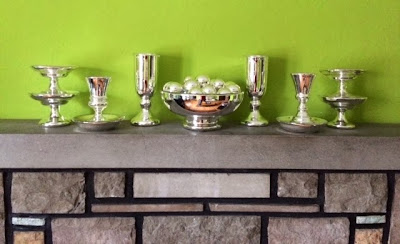 For the holidays, Kevin proudly displayed his pieces on the mantle.  Vases, compotes, plates and bowls were set against this bright & cheerful green wall.  They are absolutely gorgeous. 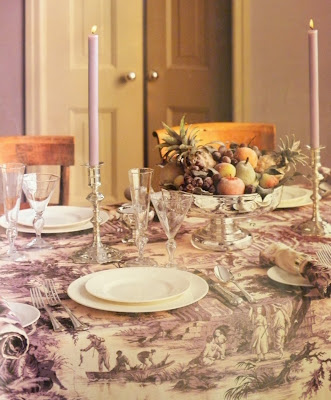 Another vignette from Martha by Mail shows that large footed bowl set on top of a plum-colored toile tablecloth.  The plates are Wedgwood white bone china, the silverware is Bernini Italian silver-plate and the glassware is Juliska. 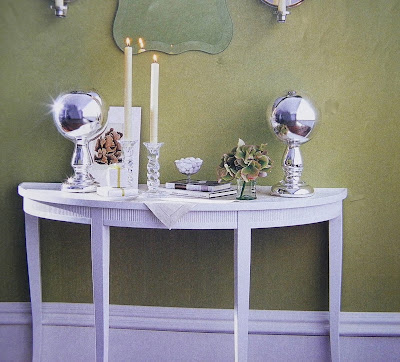 Mercury glass butler's balls were also available through Martha by Mail for a few years.  These were originally meant to be used by butler's in Victorian times to discreetly keep an eye on guests during a dinner without appearing to do so.  On this demilune table, they act as decoration. 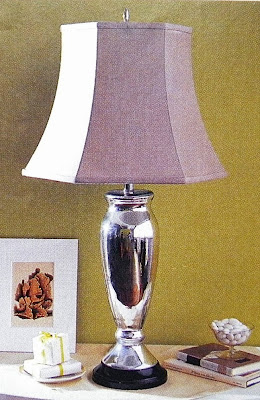 This beautiful mercury glass table lamp with its wooden base and hexagon lampshade would be a great addition to any home.  The lamp was designed after a story on repurposing objects for lamps was published in Martha Stewart Living magazine. 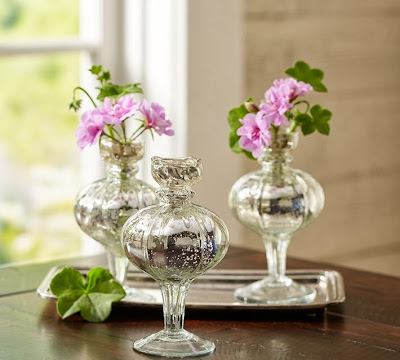 These diminutive vases are meant to hold buds of garden flowers.  Their bulbous shapes seem to call to mind antique perfume bottles.  All contemporary pieces of mercury glass are not double walled, therefore they won't feel as substantial and hefty as the antique kind.  However, they're equally beautiful and suitable for so many types of decor. 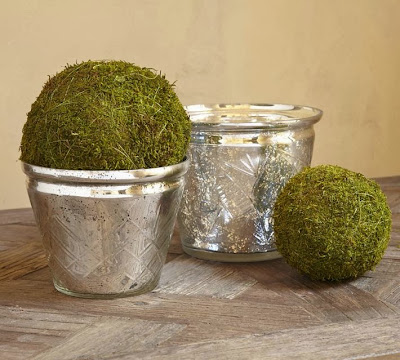 Look closely.  These contemporary pieces of mercury glass have a raised pattern and are given an antiqued look.  I've noticed that many manufacturers have added this vintage element, which makes them seem as if they've been around for decades. 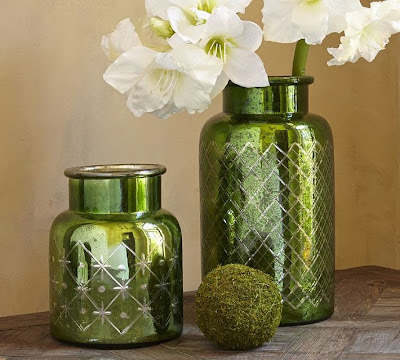 Colored mercury glass is quite beautiful as well.  These two vases in the shapes of jars not only have an antiqued colored finish, but they also have an etched pattern that is ground into the glass.

Whether you call it silver glass or mercury glass, if you're a collector of it or are thinking of collecting it, keep in mind that the condition of each piece (unplugged pieces will experience deterioration of the silvering agent over time, causing it to flake and crumble) and the rarity of the design, will have an affect in price.  Moreover, etched designs, painting motifs and even colored pieces may command more than a plain & humble silver piece.

Lucky for us, though, many home design stores have been carrying contemporary pieces of mercury glass for quite some time, therefore it is possible to purchase wonderful home accessories in fresh designs, at decent price points today.