Watching the fox kits and their mother relaxing on our lawn is truly remarkable.  Over the course of this past week or so, the babies have been rambunctious, hilarious and really adorable.  I love how they emerge from behind the forsythia one at a time, and begin their playtime activities with one another.  At times they even manage to get their mother to play along, but most often, mom sits upright with her ears perked and her eyes watchful of any intruders.  She is a good mother who fiercely guards her kits. 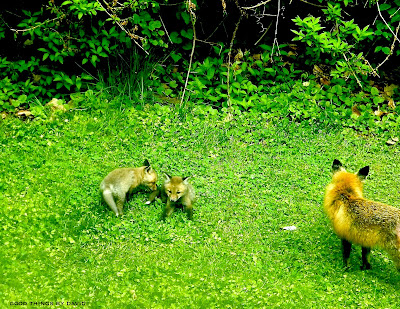 It's amazing how tan-colored, bordering on the brown, the babies are at this stage of their life.  In a few months their coats will take on the familiar red tones of their mother. 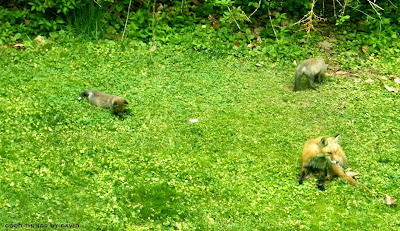 I would venture to say that the kits are no more than two months old, but I could be wrong.  Even so, at this age, they are already showing the common traits of little hunters.  The babies stalk and pounce on one another, only to end up biting each other as they roll around on the lawn.  It's almost too hilarious to watch! 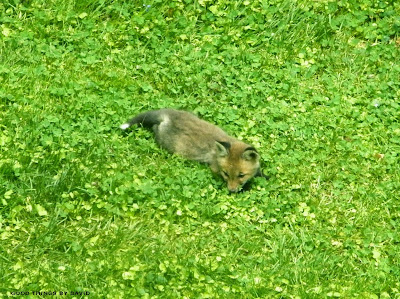 This little baby clearly sees something on the lawn.  I have to say that their behavior reminds me so much of a cross between a puppy and a cat.

This is the mother who is always nearby.  She is never far from her litter.


Look at how lovingly mom grooms her babies.  The little one rolled onto its back is having its chin nibbled on by mom, while the other one crawls all over her.

This short video is a real treat.  I took it from one of the upstairs bedrooms (forgive me for the background music).  The babies are a riot!

There are a total of 5 kits in the den near our house, with two female foxes who take turns watching over them.  From what we've observed, the pack seems to consist of the two females, one male and the 5 kits.  Every year we think we won't see anymore foxes, but sure enough, they manage to make a home and have a litter or two on the hill next to our house.  Believe me, I feel very fortunate to be a witness to this little bit of nature.
Email Post
Labels: Home and Garden