It began to snow here in the Philadelphia area on Friday night and into the early morning hours on Saturday.  We didn’t seem to know just how much accumulation to expect when we went to sleep on Friday, but by Saturday morning it was all too clear that we had been spared the feet of snow that Nemo seems to have dumped throughout the Northeast.  Normally, I enjoy the snow when it first blankets the landscape and makes everything look pristine, but the digging out is something entirely different altogether.  Our driveway that winds its way up from the house and onto the road is quite long, so as you can imagine it can be somewhat of a nightmare for us when it does snow.  Icy conditions make it even more difficult.

The plow that digs us out from the snow arrived early on Saturday, so we got access rather quickly.  Thankfully!  I personally wasn’t in the mood to drive out over the weekend, because I wanted to get a few things done inside the house and get to a recipe I’ve been wanting to share with you.

Before I started baking, though, I did get my camera and go out for a hike around the house.  This time I did not take my gloves off whatsoever, because the last time I did when it snowed and I tried taking pictures, my fingers started to get numb within minutes.  Somehow I managed to do alright with gloved hands and a camera.  Although it was bright and sunny the entire morning, there was a strong wind  for most of the day which kept bringing down patches of snow off branches and onto the ground.  I was caught under these mini-blizzards a few times, but nothing came of it, because I simply brushed myself off and continued though the trails photographing what caught my attention.

For those of you who live where it doesn’t snow during the winter, go through my pictures and see a little bit of the Northeast as it is right now in mid February.  If you are in the areas where copious amounts of snow fell over the weekend, I hope you’re digging out safely and are warm. 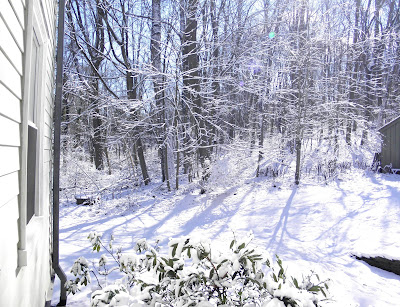 As I walked onto the front porch I was confronted with bright sun and sweeping views of snow. 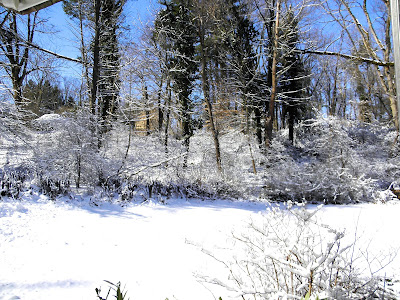 On the other side of the house, the trees were literally swaying with the wind.  It's rather unsettling to hear the trees hit against one another. 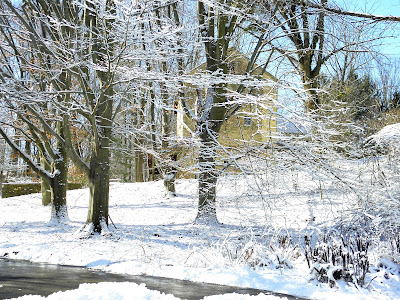 Looking up toward the barn you can see that there wasn't too much snow.  Three inches or so at most. 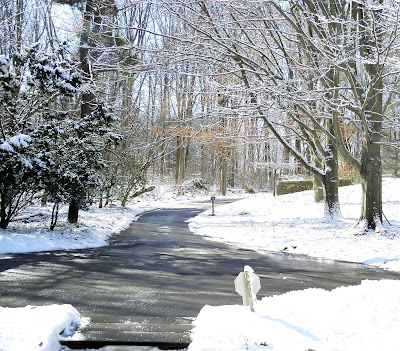 This is what we like to see.  A driveway that's been cleared of snow and ice.  This can be quite a headache if  it hasn't been plowed. 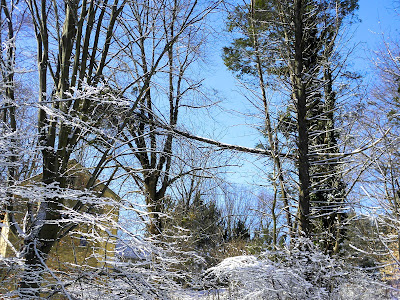 A poor hemlock was snapped from its trunk about 20 feet high. 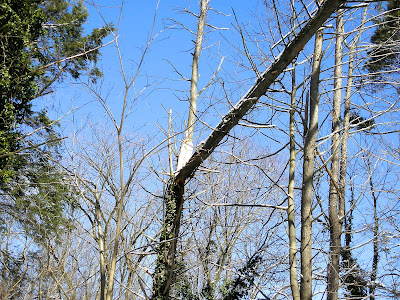 You can see how it clearly ripped in half and landed onto another tree. 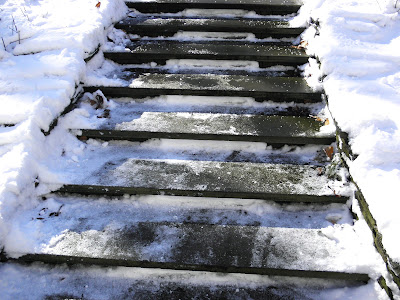 Snowy steps are one thing, but iced steps that cannot be cleared are a danger. 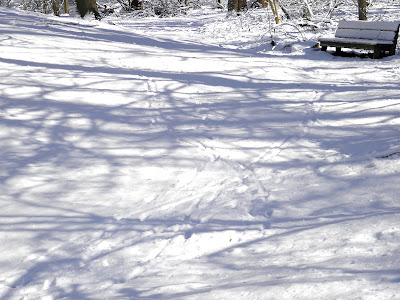 If you look closely at the snow, critters have already been walking through here.  These are either fox or deer prints. 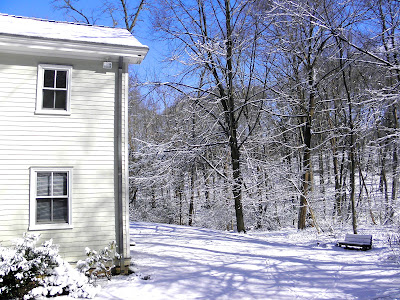 Here's a view of the side of the house looking down the hill. 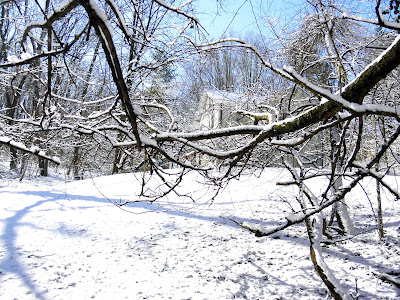 As I made my way toward one of the bridges, I turned around to look at the house.  I don't know why I find snowy tree branches to be so beautiful. 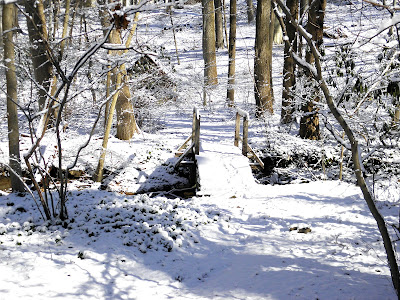 More tracks in the snow.  The bridge was covered in thick powdery snow.  Nemo wasn't too bad here in the Philadelphia area. 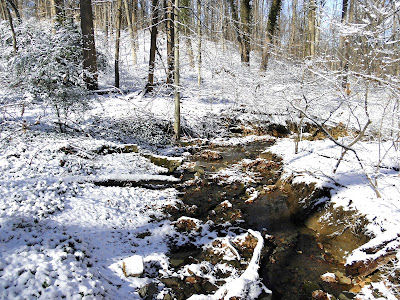 The small brook that cuts through the property never freezes over because the water is always running.  Usually I like to stand here and listen to the water trickling through, but on this particular morning I simply took my photographs and moved on.  Too cold! 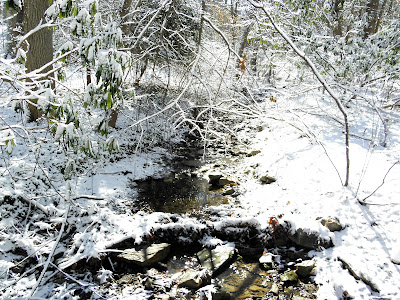 Here's another view of the brook looking toward the east. 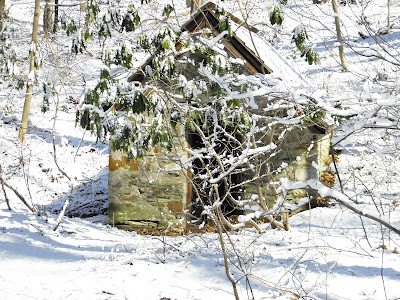 The lonely spring house looks a bit hobbit-like every time I come near it.  The spring inside it was bubbling away. 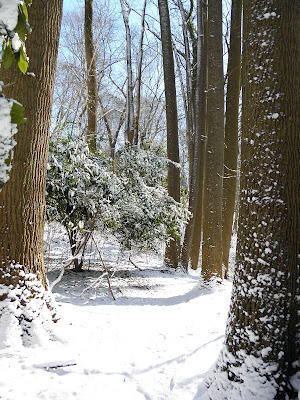 This is such a nice view of the snowy path flanked by giant trees.  Make no mistake though, the wind was blowing quite fiercely, so there was no stopping to admire it.  I was actually afraid of falling branches. 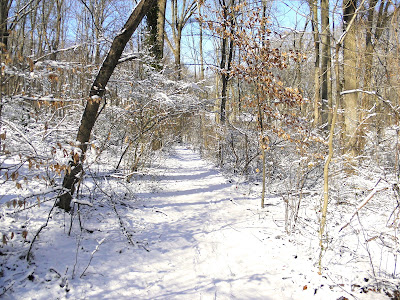 Thick with lush growth during the spring and summer, this part of the trail was barren and rather lonely on Saturday.  Not a bird, squirrel or deer could be seen. 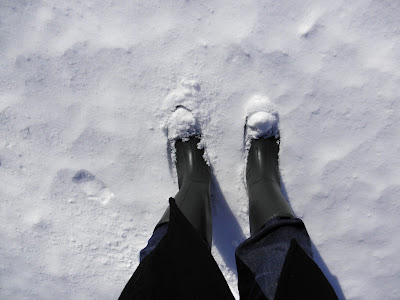 My wellies provided me with adequate protection from the snowy paths.  A thick wool coat was necessary to even be out. 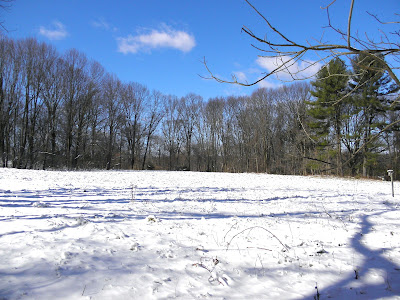 With wind chill factors on Saturday somewhere in the teens, it was rather inhospitable to be out and about.  Here's the edge of the meadow with all of the bare deciduous trees in the distance. 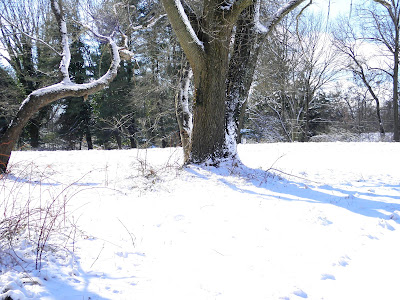 I giant tree trunk marks the entrance to one of the trails.  I'm glad it's still standing because during hurricane Sandy we had over 15 trees come down around the house. 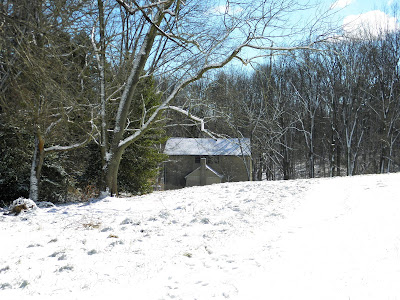 Here's a view of the rear of the barn.  It looks tiny from afar. 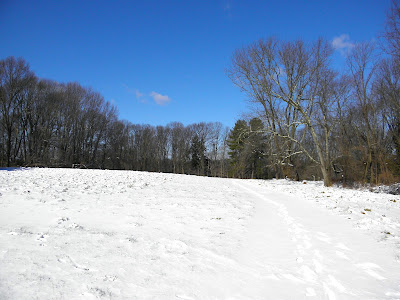 As I made my way back toward the house I turned around to look back at the field.  Blue skies with barely a whisper of a cloud here and there, it was so utterly cold on Saturday.

Is anyone ready for spring yet?  I know I am.