Storage jars are must-haves for homes everywhere, because they can be utilized in so many different ways.  I love having a variety of them in the kitchen for my pantry items, from old Ball jars and contemporary ironstone ones, to the highly collectible apothecary jars that were once sold through Martha by Mail.  Ranging in size from 1 gallon to a very capacious 4 gallons, the hand-blown glass jars that have become a fixture in the various incarnations of Martha Stewart television productions, are beautiful for any home.  I want to reintroduce them to you.

The original jars were first seen at the Westport Television Studios of Martha Stewart Living in the late 90s.  The Turkey Hill reproduction kitchen always had these jars filled with a variety of items, from flours & grains, to wrapped chocolate and birdseed.   These television studio prototypes had rather unusual lids which were always colored in a shade of teal; they were probably custom-made lids that were powder coated in paint from one of the MSLO paint lines.  Although they stayed that color for the entirety of Martha Stewart Living Television, they did at one point have drabware-colored lids.  Keep reading and I’ll show you.

While Martha by Mail was in production, the apothecary jars became one of those items most of us coveted.  The jars were hand made from partly recycled glass which bubbled here and rippled there, and were given stunning aluminum lids.  They were not inexpensive pieces for the kitchen, let me tell you, with the largest one costing close to $100.  Every once in awhile I do see the jars come up for auction, but it is usually one of the smaller jars.  The 3 and 4 gallon ones hardly every pop up.

If you have a complete set, lucky you!  Use them in your kitchen and give the jars a prominent place on a shelf or kitchen counter just as Martha does in her homes.  Oh yes, she owns these sets and has them at Cantitoe Corners, Skylands and at Lily Pond Lane.  Have a look.

Martha by Mail Apothecary Jars for the collector. 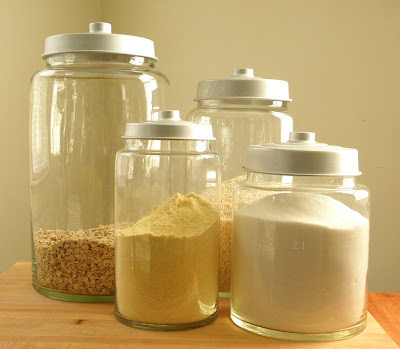 This is one complete set of Martha by Mail Apothecary Jars in my kitchen. 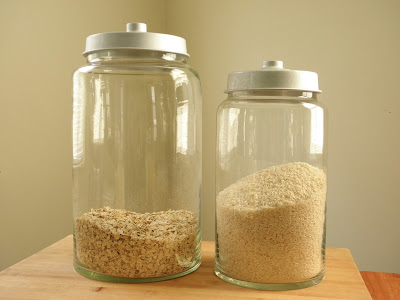 On the left is the large 4 gallon jar.  I'm currently storing old-fashioned rolled oats in it.  The one on the right is the 3 gallon jar which has extra-long grain Carolina rice. 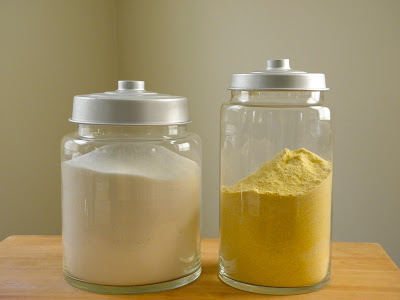 The squat jar on the left filled with pure cane granulated sugar is the 2 gallon size.  On the right is the slender 1 gallon one; it's filled with stone ground yellow cornmeal. 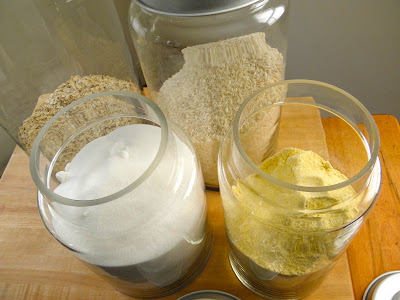 One of the things that I truly love and appreciate about this set of jars is that they have wide mouths.  This makes it easy to reach in and scoop out whatever it is I need. 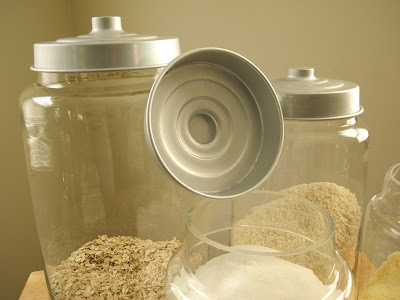 Here is a view of those wonderfully-shaped aluminum lids.  The lids and the jars are not dishwasher safe, so if you do own them, simply wipe them down with a damp kitchen towel and dry them thoroughly. 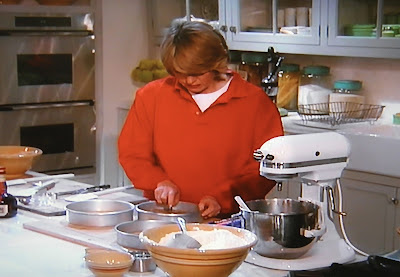 Here is the Turkey Hill kitchen at the Westport Television Studio.  Behind Martha, right on the counter, are those apothecary jar prototypes.  The lids are probably custom made and custom painted. 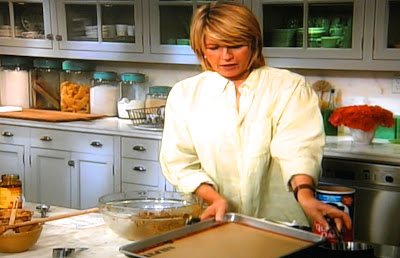 Here is another view of them.  I'm not sure what shade of teal the lids are, but they do make wonderful conversation pieces. 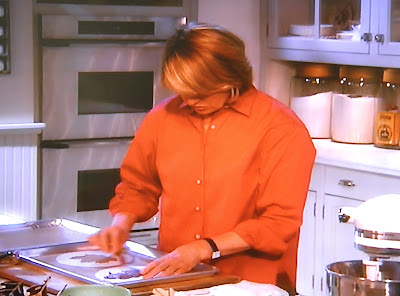 This is the only time I recall seeing the lids painted in a dark drabware color.  I'm not sure how long this color scheme lasted, but it too is a nice shade.

The final set of the Martha Stewart Show.  You can clearly see in the background, from left to right, the 4 gallon jar (custom lid in plain aluminum), the 3 gallon jar with original lid and two 2 gallon jars with original lids.  They've been decorated with adhesive chalkboard squares from Martha's line of products available at Staples. 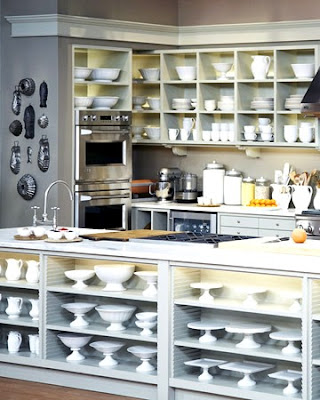 Here is a photo of the original set of the Martha Stewart Show, inspired by the main kitchen of Cantitoe Corners (Martha's home in Bedford, NY).  The apothecary jars are on the counter against the wall.  This was such a wonderful space.  Good design, good color palette and well appointed. 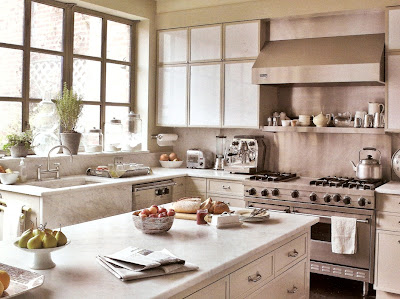 This is Gael Towey's Greenwich Village kitchen which was written about quite extensively in Martha Stewart Living magazine.  She's the former Chief Creative Officer of the company.  You can clearly see that Gael prominently displays her jars up along the windowsill of her spacious, light-filled kitchen. I've always loved Gael's aesthetic. 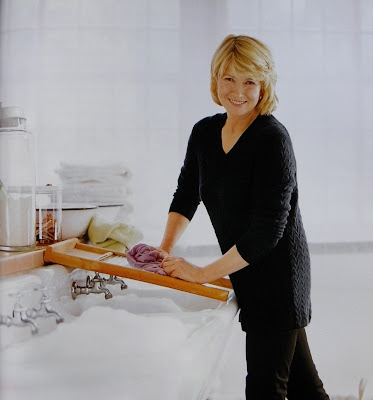 The laundry room at Skylands (Martha's house in Maine) is one of her favorite spaces in that marvelous 35,000 sq.ft. pink granite mansion.  The large 4 gallon jars are favored there for their size; laundry detergent, pins and other homekeeping items are kept in these jars. 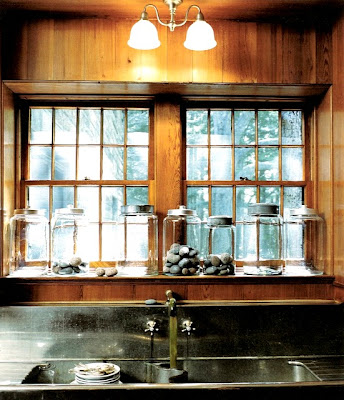 The butler's pantry at Skylands has several apothecary jars, both Martha by Mail versions and antique ones. 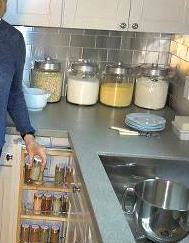 I recently spotted the 2 gallon apothecary jars on Martha's blog.  Apparently she decided to redo the kitchen of her guest house at Skylands and chose to add the jars as part of the decor.  Go through that post and look at that well designed space.  You're going to love it. 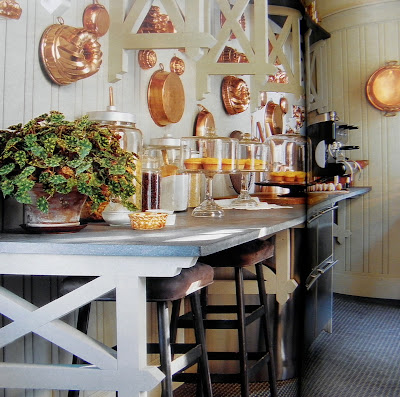 This is the horse stable kitchen at Cantitoe Corners.  The shelf holds some potted begonias, antique cake stands with domes and those wonderful jars filled with many pantry items.  Isn't it marvelous? 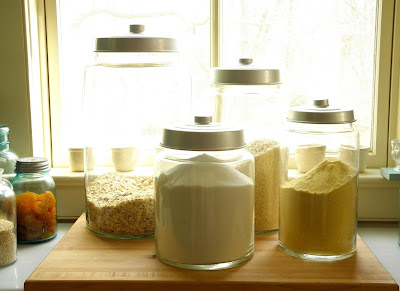 The jars in my kitchen are used every single day.  They are well taken care of and will be for years to come.