A few weeks ago I was fortunate to have visited a farm near our home that was once a working farm.  The corn crib I wrote about in a previous post is part of that property, and it's just one of the many buildings on the farm.  With my curiosity piqued & a camera at the ready, I was taken around on a small tour by my friend Paul.  My first feelings toward the place were those of complete respect, appreciation & utter amazement for the farmer.  Every building & every road was taken into consideration when the layout of the buildings was established on the beautiful rolling landscape.  Although the actual construction of the various buildings spans several centuries, everything makes perfect sense.

The original stone colonial home, which dates back to the very early 1700s, is now the private property of a family.  A bank barn dating to the early 1800s was my first stop.  Because of the stone barn that sits along our driveway, constructed during the same era, I was eager to compare the two; there were many differences between them as you will soon see.  The one on this farm is larger, with several additions to it.  Walking around the place, I got the sense that this was a farm that supported a lot of people.  Many hands had to work the land, tend the crops, clean the chicken coops (they're no longer standing), milk the cows, feed the livestock, thrash the wheat and cook the meals.

Let's look at the former working farm near my home here in Montgomery County, Pennsylvania. 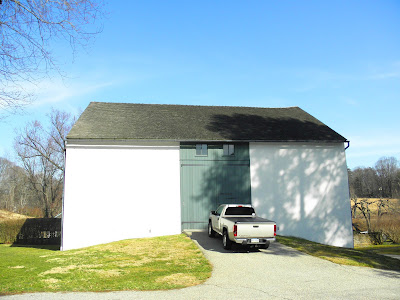 Constructed in 1825, the bank barn sits proudly against a sloping hill.  When you compare this barn to the one next to our house, you can immediately see the difference.  For one, the walls have been stuccoed (not original) and whitewashed.  This particular barn has no windows, except for the two over the large double doors leading into the main bays and a few on the lower, ground level. 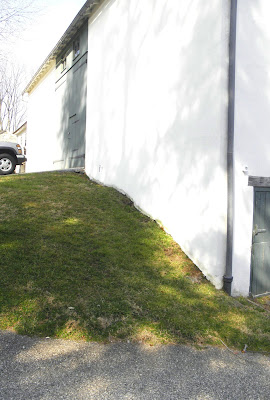 You can see how the slope meets the barn entrance.   A convenience for large equipment. 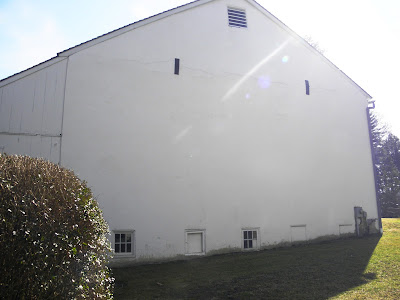 The other side of the barn shows small window slits at the top (for ventilation mostly) and lower windows on the 'basement' floor. 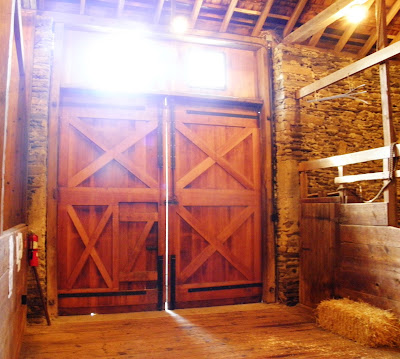 Completely reconstructed using the same measurements from the originals, the barn doors are large enough to let heavy farm equipment through.  The transom windows really brighten up the interior. 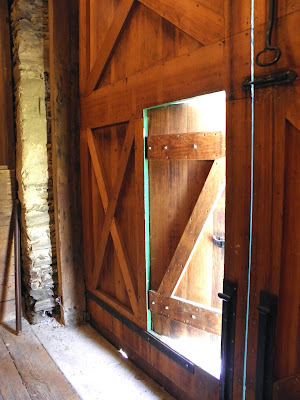 A man door is built into one of the barn doors.  This allowed the farmer & various workers to access the barn without having to open the heavy main doors. 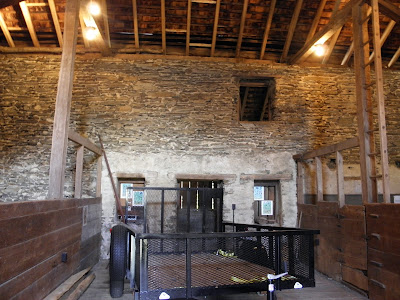 The walls were constructed using fieldstone from the property itself.  This was typical of barn construction in the area. 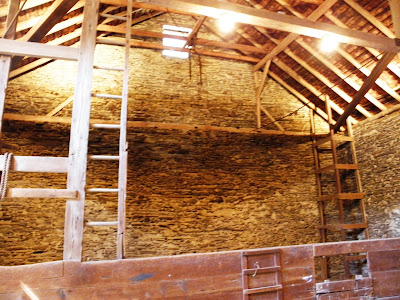 The barn where we live has many windows along the bay walls, which floods it with daylight, while the barn on this farm does not.  It is now illuminated with electricity. 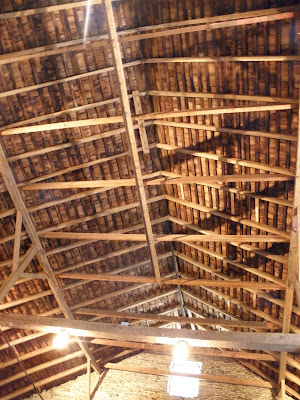 The same type of roof construction from the early 1800s.  A testament to good construction is that it still stands after so many centuries. 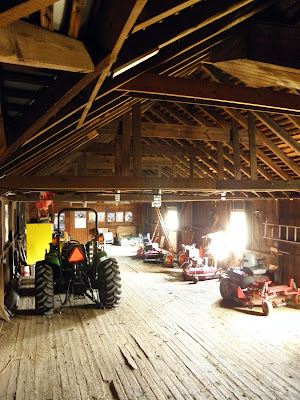 The addition built around 1906 was meant to shed the equipment of a growing farm.  This is the second floor of that addition.  Milk cows were kept in the lower portion. 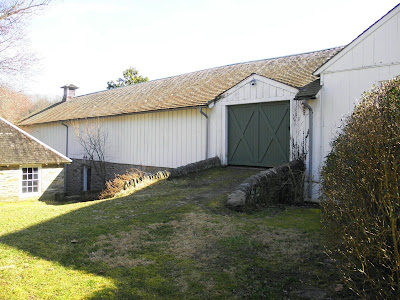 The doorway along the side of the addition is now used to access the modern farm equipment.  Notice the sloping ramp. 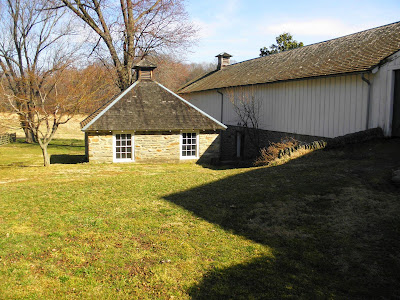 A milk house, also known as a buttery, is adjacent to the rear addition of the barn.  It is a perfectly square structure with a cupola-topped roof. 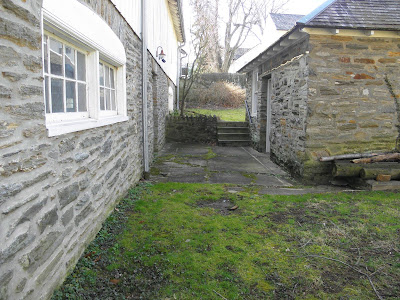 On the left is the floor where dairy cows were kept (this is directly beneath the equipment barn).  All of the milking was done there by hand. 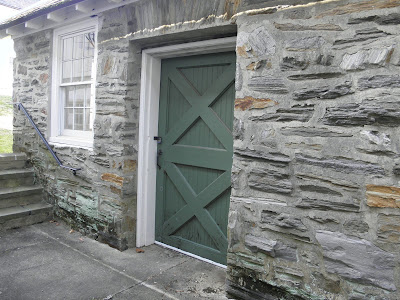 A Dutch door leading into the milk house is directly opposite from the door leading out of the cow stalls.  This made it convenient to move the milk for storage. 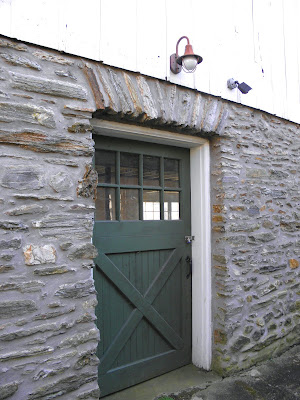 This is the door to the bottom floor of the barn.

Copper flashing on the shingled roof.  Way before modern refrigeration, milk houses were used to cool down milk in shallow pans or nappies, either by ice or by cool water from a nearby spring.  Once cool, the cream was then separated from the milk and turned into butter.  This particular milk house did not churn butter, however.  It sold the milk to a nearby dairy. 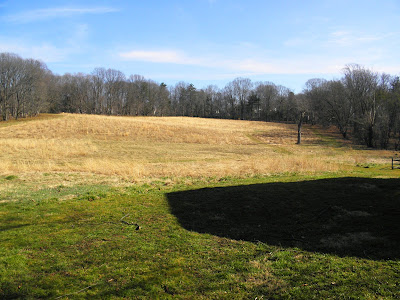 The 10 acres behind the farm aren't used anymore for planting.  The area becomes a meadow in the spring & summer with paths carved out for walking.  It is then given a final mowing right before the fall.  I'm told by Paul that at one time, this property stretched all the way down to where we currently live.  That's 3 miles or so from here.  A large plot of land indeed. 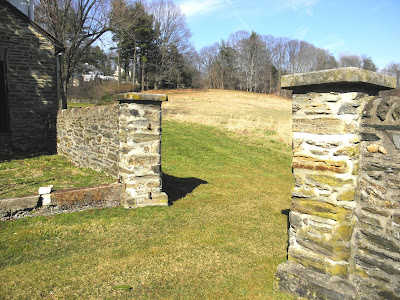 The entrance to the area where the dairy cows were allowed to go out into the elements is enclosed by a large 6 ft. stone wall.  The original gate, as you can see, is no longer here. 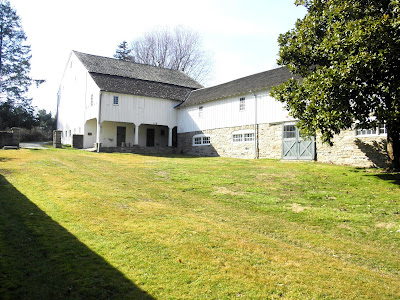 This is the same area.  You can see the large double doors to the bottom of the barn.  The multi-storied structure in front of it is the bank barn itself. 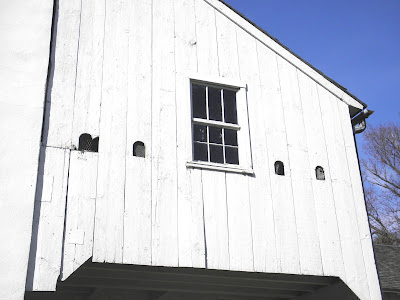 Paul tells me that passenger pigeons, which are now extinct, were kept in this area of the barn at the turn of the 20th century.  You can see the 4 cut outs allowing them access. 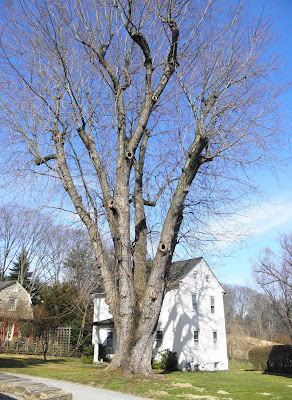 I love this gigantic silver maple. 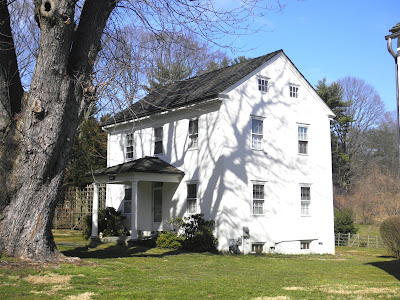 A primitive colonial is but one of the several that sits on this property.  Its white walls give it a Shaker appearance. 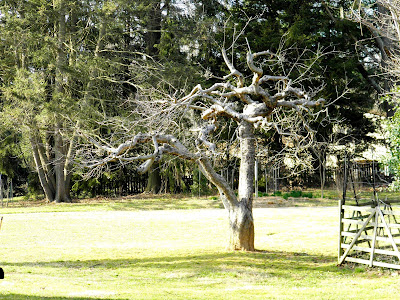 This macintosh apple tree is lovingly cared for by Paul & his wife. 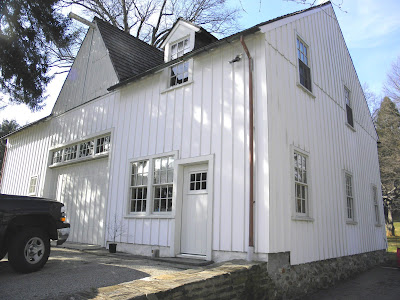 The workshop was used to build, restore & refurbish just about anything on the farm.  It is still used for such a purpose. 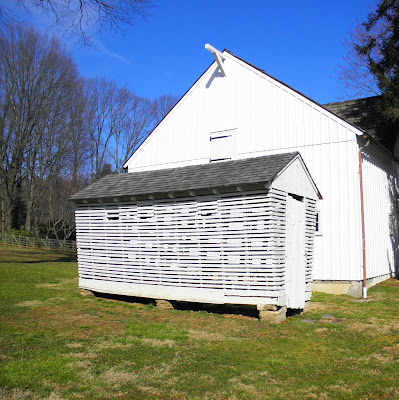 The corn crib sits next to the workshop.


Farms are an important element in our lives whether we're conscious about it or not.  Many of us are mindful when it comes to buying from local farms these days, which is definitely a good thing in my opinion.  By doing so we help sustain local agriculture while protecting the environment around us.  A hundred years or so ago, buying local would have been the only way.  Walking through the property I am also reminded of how the various animals would have been humanely raised on this farm & wish it were true for all present day animals on farms across the globe.  I feel lucky to have been allowed access to such historic structures and taken a look at our past.  I hope you enjoyed this just as much as I did.
Email Post