It's always fun going antiquing even if I don't plan on buying anything, but I do allow myself the possibility should I come across something enticing.  That's exactly what happened to me on Monday.  It had been a long time since I had even entertained the notion of visiting an antique shop, so I ventured forth and drove on a beautiful day over the Benjamin Franklin Bridge across the Delaware river (yes, the same river made famous by the Leutze painting of George Washington crossing it).

Going back to my former hometown of Haddonfield is a nice treat since it doesn't happen all that often. 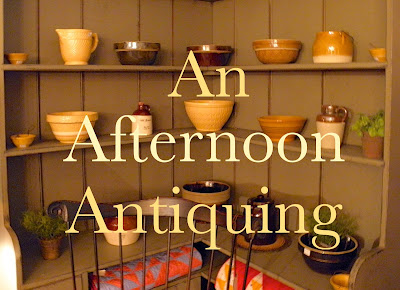 I've shown you before what the main street looks like in that [town] with the numerous shops, cafes and  restaurants; it is teeming with activity every afternoon.  There's a little bit of everything for everyone here and I encourage you to visit if you're ever in the area.  Some things have changed since I last visited, such as digital metered parking and stores changing ownership, but the main stores with vintage items and antiques are still standing.  Luckily!

As I was making my way down Kings Highway, I decided to stop at a store that I normally overlook.  A mix of vintage-inspired home goods & furnishings are the forte of this particular place, but there are plenty of antiques scattered throughout the rooms if you look for them.  As I made my way through the showrooms I checked off what I wanted to go back to.

I was only able to take a few photographs, unbeknownst to the shopkeeper, because they don't really allow for photography at these types of establishments.  Don't tell anyone!

Luckily I found a few treasures. 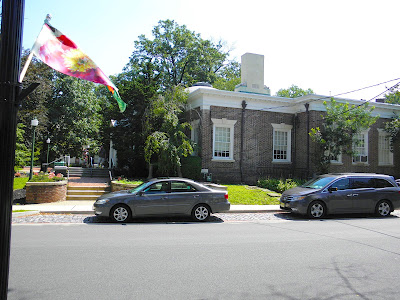 I parked directly across from the old library.  The Haddonfield Public Library was a place I visited on a weekly basis when I lived here.  It dates back to 1803 and was one of the first libraries in New Jersey. 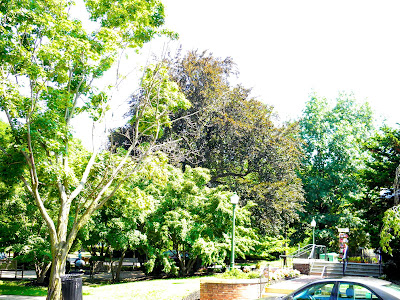 I've told you before that I adore trees and this one that's front and center is one of my favorites.  It's an old copper beech that has been here for years.  You should see the leaves when they're a dark plum color.  Absolutely breathtaking! 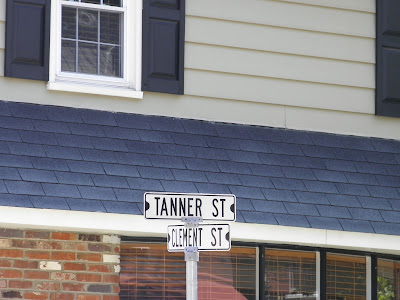 An street sign.  Many of the streets are not only named after citizens from colonial times, but several are named after the professions of some.  "Tanner" is where the tanner used to have his business.  There's also a "Potter St." where stoneware used to get made. 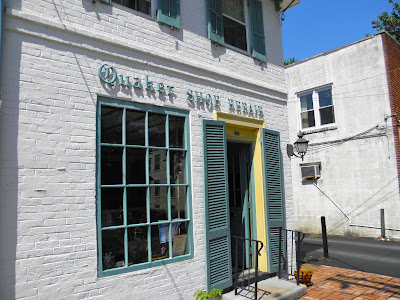 They still hand cobble shoes the old fashioned way at this store. 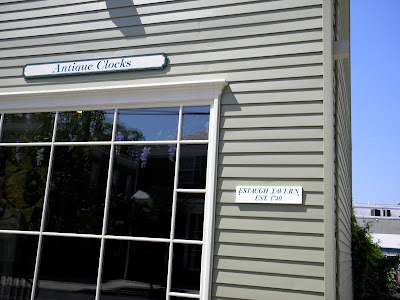 The Estaugh Tavern has been around since 1740! 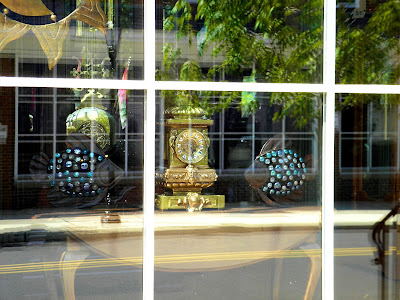 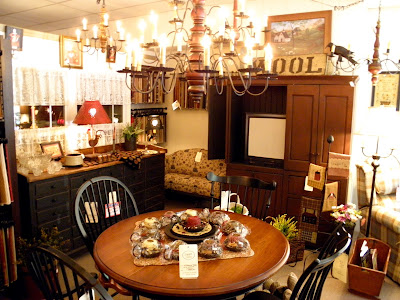 Here I am inside the store I was telling you about.  All of this furniture is colonial reproduction.  You can see those old wood & tin chandeliers that were common among homes of the well-to-do.  Finding originals can be time consuming and very costly, so it make sense to get an exact replica of an antique.  They're just as beautiful. 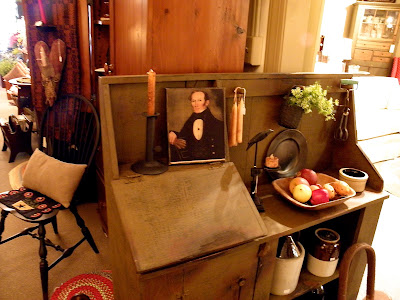 A kitchen hutch with candles, wooden trays and a few old crocks.  I love the portrait painting. 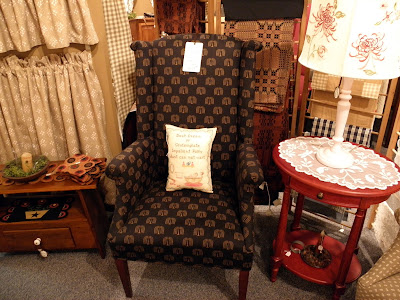 This wing chair caught my eye because of it's fabric.  I just had to get a closer look at it. 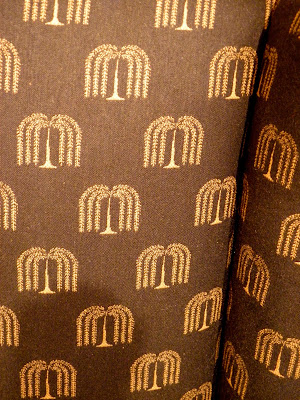 This pattern of a weeping willow has such a Shaker influence.  It's stunning. 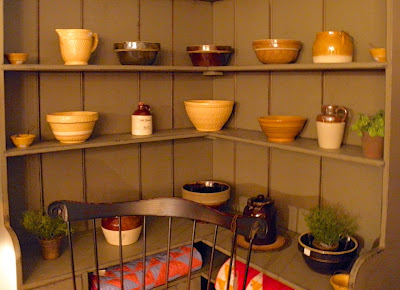 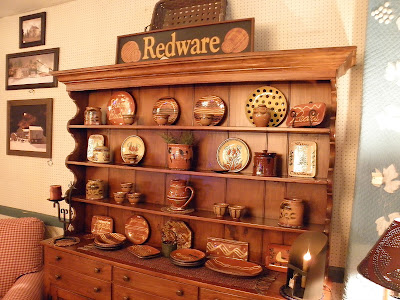 Redware reproduction for those who collect it. 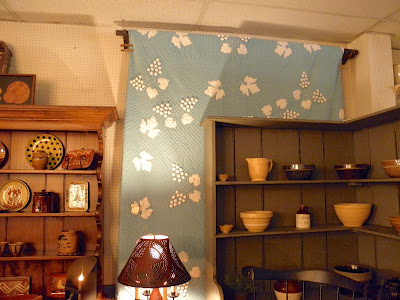 I took this photograph because I wanted to show you the quilt behind the hutch.  Appliquéd leaves are attached to a light blue quilted background.  I can see this in a bedroom with warm earth tones. 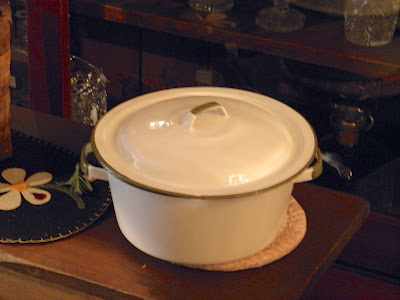 I'm not sure if this granite ware bowl was meant to be used as a chamber pot or not, but I think it would make a nice composting bucket in the kitchen. 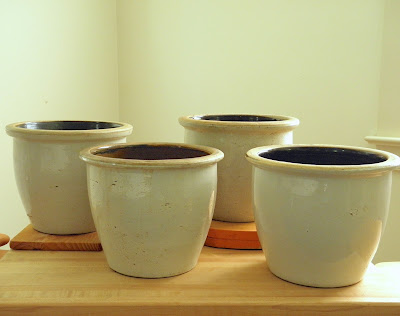 Do you know what these are?  After giving the store a full run and making mental notes of what was what, I went back and took a closer look at the vessels which were scattered throughout the store.  I had the store's owner follow me from room to room picking these off from high shelves and setting them aside so that I could inspect each one.  I did not hesitate to buy them because it's very unusual to find more than one of the same shape and color.

Alright, I'll tell you what they are.  They're pickling crocks from the 1800s.  The ones here, in particular, were used for sauerkraut.  I've actually seen an antique sauerkraut maker before, which is nothing more than a large mandoline-style bench where a cook would sit and shred the cabbage in large amounts. 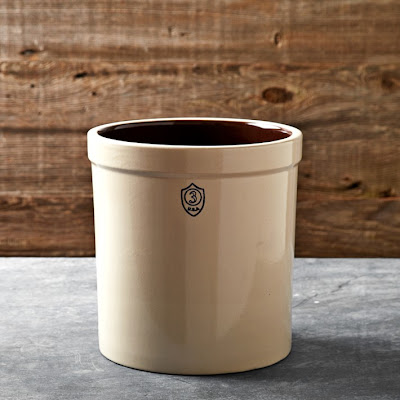 This is a contemporary pickling crock.  Many people use these in their homes in various ways nowadays.  I've seen them hold umbrellas in hallways, firewood next to a hearth, and rolling pins on kitchen counter tops.  Martha has large ones at Lily Pond which she uses as recycling bins. 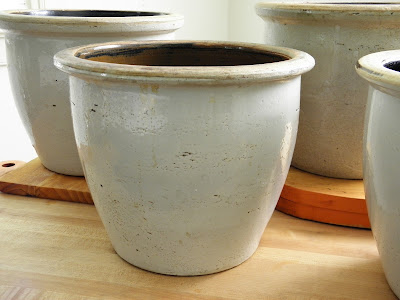 Look at how varied and unique these are.  Pops in the clay, drips in the glaze make them so beautiful. 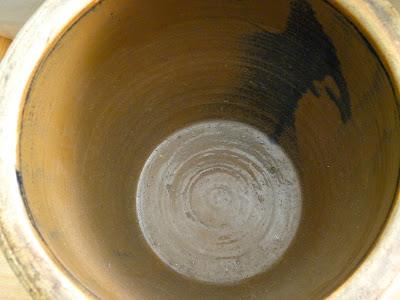 The insides of all pickling crocks were glazed to help the fermentation process. 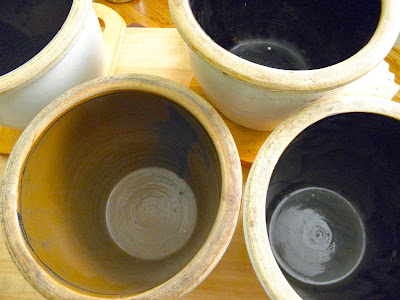 Three of the vessels had dark chocolate interiors and one had a light ochre tone to it. 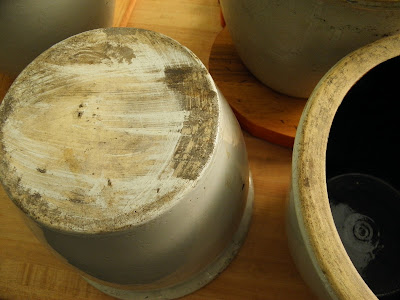 The undersides and the rims of the crocks are not glazed.  They are rough clay and clearly worn with use.  Perfect for one who collects antiques! 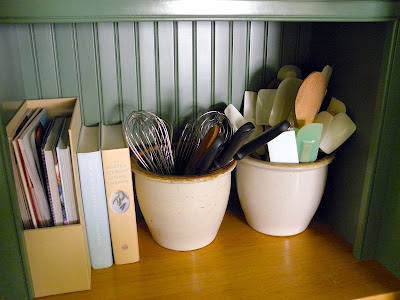 This small counter under my "mise en place" cabinet was just the place for two of the crocks.  I filled them with whisks, spatulas and spoons which are used exclusively for baking.  I keep these separate from my every day cooking utensils.  Don't they look right at home here?

✫
There were several things which I had to walk away from because I didn't want to break the bank, but I've made mental notes of them.  Whether I go back or not to buy those items remains to be seen.  Either way, I think my afternoon antiquing was a well spent one and I'm glad I made it back to my former town of Haddonfield.  It's a place I will always consider special because I spent so many years there.
✫
I'm going to show you in the near future what I take with me whenever I go antiquing.  You have to be prepared for the unexpected so I'll let you in on a few secrets.  Stay tuned!